Please ensure Javascript is enabled for purposes of website accessibility
Log In Help Join The Motley Fool
Free Article Join Over 1 Million Premium Members And Get More In-Depth Stock Guidance and Research
By Adam Levy - Jan 27, 2020 at 11:00AM

The WeChat owner is leveraging its user base and introducing similar features to best its rival.

ByteDance's TikTok has taken the world by storm, but nowhere is it more popular than in its home country, China, where it goes by Douyin. Douyin has over 500 million monthly active users sharing and viewing short-form videos of themselves. The app's robust growth puts ByteDance in a position to take on the dominant social media and app company in China: Tencent (TCEHY 2.46%).

Tencent's WeChat (Weixin in China) had 1.15 billion global monthly active users as of the end of September. Its Moments feature, which is similar to Facebook's (META 7.19%) newsfeed, has been a big driver of its ad revenue over the past couple of years. Social advertising revenue grew 32% in the third quarter, compared to 13% for the overall online advertising segment.

So the growth of Douyin and its push into social advertising represents a considerable threat to one of Tencent's biggest growth drivers. To stem that threat, Tencent is using a strategy comparable to Facebook's attempts to thwart Snap's (SNAP 5.45%) Snapchat and other smaller competitors. It's leveraging its massive user base and co-opting features from its smaller rival to prevent its users from spending as much time in other apps. 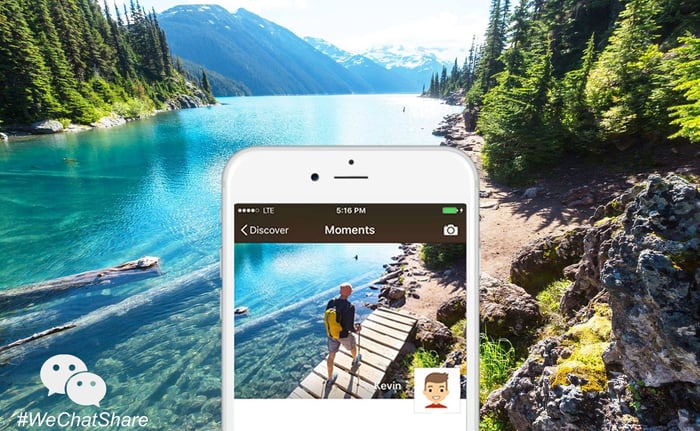 As an answer to Douyin and TikTok, Tencent is testing a new feature that enables users to upload short videos and photos to WeChat Moments, according to a report from Bloomberg. Moments focuses more on articles users want to share than on the type of content users might create for TikTok or Snapchat.

This isn't Tencent's first foray into social video. In December 2018, the company introduced a Stories product called Time Capsule. The feature failed to catch on last year, perhaps hampered by the placement of the feature within the app. Instead of making it boldly noticeable at the top of the user interface in Moments, like in Instagram's feed or Snapchat's Discover sections, Tencent buried it within the main chat feature.

The company's latest attempt to copy video features from its rivals might require more willingness to overhaul a product that's working and boldly feature the new format in one of the most popular sections of WeChat. That would leverage the large user base on WeChat to discover and create more engaging content and spend more time in the app that already consumes a lot of time on mobile for Chinese consumers.

Some investors may be concerned that Facebook's strategy of copying features from rivals doesn't really work very well. Stories, which Instagram blatantly copied from Snapchat, has certainly been a standout success. But other features Facebook has tried to copy from Snapchat, and its efforts to emulate YouTube with Watch, haven't always worked out quite as well. Instagram's latest attempt, Threads, hasn't exactly taken the market by storm.

But investors panning the Facebook copycat strategy miss two important details. First, a flop for Facebook could be a massive success for a smaller company. Facebook's sheer size (2.8 billion unduplicated monthly active users across its family of apps) makes attracting only a few million users to a new product seem like a failure.

Moreover, when Facebook succeeds, as it has with Stories, the profit potential is enormous. Stories already accounts for around 10% of ad spend on Facebook's platform, according to data from Socialbakers. That'll be around $7 billion for 2019. It only takes a single success for the strategy to work, and even when it doesn't work out the losses are minimal.

Facebook's massive user base allows it to get a successful and engaging product in front of a lot of people very quickly, and that's exactly what it did with Stories. The tech company expanded the feature to its other main apps, highlighted the feature in the user interface, and iterated on the product quickly in order to increase engagement.

To that end, Tencent ought to copy as many features as it can jam into WeChat without degrading the user experience. If a new feature fails to catch on, Tencent can degrade or delete it and move onto the next one. If it succeeds, it has one of the biggest platforms in the world to scale quickly and maximize engagement and potential revenue.