Please ensure Javascript is enabled for purposes of website accessibility
Log In Help Join The Motley Fool
Free Article Join Over 1 Million Premium Members And Get More In-Depth Stock Guidance and Research
By Lee Samaha - Jan 28, 2020 at 9:47AM

The railroad is demonstrating it can improve is profitability even as its revenue growth is under pressure from a weak industrial economy.

Union Pacific's (UNP -1.39%) fourth-quarter earnings report was eagerly anticipated for a few reasons. First, railroads are a key bellwether of the economy, and second, investors were keen to see whether the company would be able to keep increasing its profitability even in an economic slowdown. On both fronts the message was positive, and the conclusions drawn from the earnings are good ones for investors in railroad stocks. Let's take a closer look at why.

The investment thesis that there's going to be a recovery in the industrial economy in the second half of 2020 received further support from Union Pacific. Management of East Coast railroad CSX (CSX -1.45%) had already expressed confidence on the matter, claiming that its first quarter would be the low point from a growth perspective. 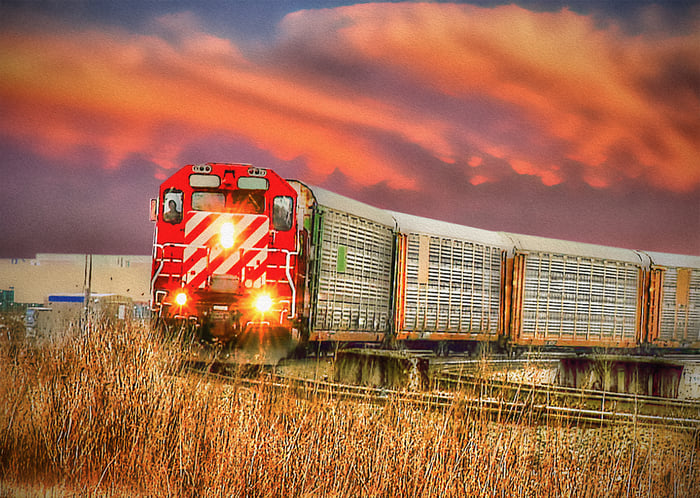 The implication from Union Pacific is similar. Quoting from CFO Jennifer Hamann on the earnings call, "we expect to see volumes inflect to the positive side of the ledger on a full year basis, growing 1% or so overall." As you can see below, this implies a significant recovery from the declines going through 2019. Moreover, Hamann said, "(the company) will continue to pursue a pricing strategy where the dollars gained exceed our 2020 rail inflation cost."

Combined, these two points paint a picture of a positive contribution from volume and pricing on a full-year 2020 basis. Indeed, analyst consensus forecasts have Union Pacific improving revenue by 2.1% in 2020. 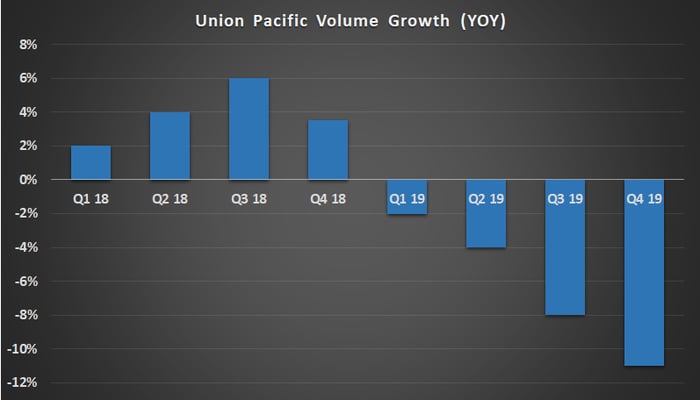 What about Union Pacific's profitability?

The biggest thing happening in the railroad industry right now is something called precision scheduled railroading (PSR). Simply put, it's a set of management principles intended to run the same amount of volume but using fewer assets. For example, under PSR, trains are run between two points on a network at fixed times. This is distinct from the hub-and-spoke model where cars enter hubs and then are attached to other trains.

Progress on PSR is usually measured in terms of increasing average train speed, reducing freight car terminal dwell (the time a car spends at a scheduled stop without moving), and improving workforce productivity (daily car miles per full-time employee). The ultimate result is expected to be a reduction in the operating ratio (OR), which is simply operating expenses divided by revenue -- a lower number is better.

The big question is whether the railroads, and all the listed Class 1 railroads are now implementing PSR, will be able to lower their OR in an environment where the economy is slowing. The answer to this question appears to be "yes." Union Pacific managed to improve its operational metrics in Q4 and the OR fell again, despite operating revenue declining 9% in the quarter.

Moreover, management's OR outlook for 2020 implies continued improvement. Management plans to reduce the workforce by 8% and make $500 million of productivity improvements in 2020, resulting in an OR of around 59%. Considering the weakness in the industrial economy in the last year or so, that would be a very good result. Note that analyst estimates for 2020 revenue imply a figure nearly 3% below that in 2018, but an earnings per share (EPS) figure 19% above.

For dividend-seeking investors looking for a pretty reliable source of income, Union Pacific is a pretty good option. The company typically pays out 40% to 45% of its earnings in dividends and, based on the earnings estimates above, that's likely to mean a 2.1% dividend yield for 2020 with potential for growth -- management believes it can get to an OR of 55% over time. Throw in some upside from a potential recovery in the industrial economy in 2020 and an improvement in trade conditions due to an easing of trade tensions, and the outlook is positive for Union Pacific.