The last year of the decade was a rather odd one for industrials stocks. Based on the performance of a leading industrials ETF, the iShares U.S. Industrial ETF (NYSEMKT:IYJ) the sector slightly outperformed the S&P 500 index in 2019, even as U.S. industrial production growth slowed to just 0.8% compared to 3.9% in 2018. That said, there are five key reasons why 2020 could turn out to be another good year for the industrial sector.

The industrial cycle is set to bottom

The trade war took its toll on investor sentiment, and leading indicators of the industrial sector -- such as the Institute for Supply Management Purchasing Managers Index (PMI) -- dropped below 50, which indicates a contraction in the industrial economy. 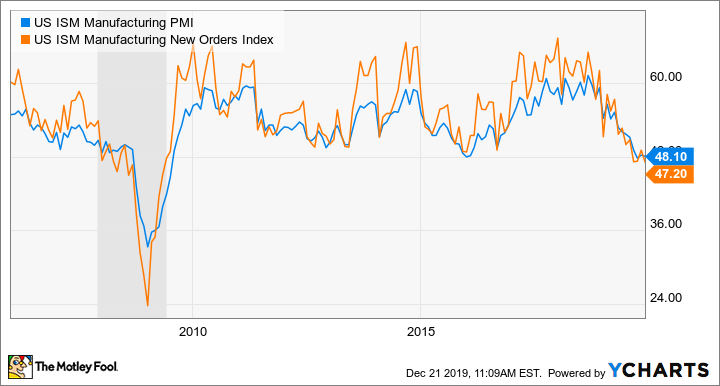 Make no mistake, the next six months aren't going to be full of good news on near-term conditions, but there's a sense that the industrial economy will start to trend upwards in the second half of 2020 -- buying into cyclical stocks ahead of a bottoming process is usually a good idea.

The outlook given by a highly cyclical company, such as motion and control technologies company Parker-Hannifin (NYSE:PH) is somewhat emblematic. Its organic sales declined 3% in the first quarter of its fiscal 2020, and management expects a 6% decline in the first half and also in the second half. According to CEO Thomas Williams, this implies "the bottoming out of Parker is somewhere between Q2 and Q3," meaning the December to March period.

Meanwhile, the largest industrial automation company in the world, Germany's Siemens (OTC:SIEGY) doesn't see a "trough in our most relevant short-cycle verticals before mid-calendar year 2020" according to CFO Ralf Thomas.

The implication is that the first half of 2020 is going to be difficult, but a bottoming could occur, leading to positive trends going into 2021.

Bearing in mind that the argument here is that 2020 could mark a trough year for many industrial stocks, it's still possible to find stocks trading on favorable valuations. The following chart shows how Parker-Hannifin and Siemens (mentioned above) trade on good-looking valuations, provided 2021 will be an up year.

Eaton (NYSE:ETN) and Cummins (NYSE:CMI) trade on cheap-looking valuations because the market is worried about their exposure to heavy truck production -- a market set to fall sharply in 2020 -- but if the industrial sector turns up, then history suggests the truck market will bounce too. Caterpillar (NYSE:CAT) certainly faces some near-term headwinds, but its dividend looks well covered and it's likely to reward investors over time.

Finally, Altra Industrial Motion (NASDAQ:AIMC) is the sort of beaten-up industrial stock that contrarian-minded investors might want to consider. The market is clearly worried about the $1.5 billion in net debt -- largely down to the $3 billion deal to buy Fortive's automation and specialty businesses -- but management believes Altra will generate $1 billion in free cash flow over the next five years, meaning the net debt-to-earnings multiple can return to a historical level of 2-3 times rather than 3.8 times at present. Altra is an interesting value option. 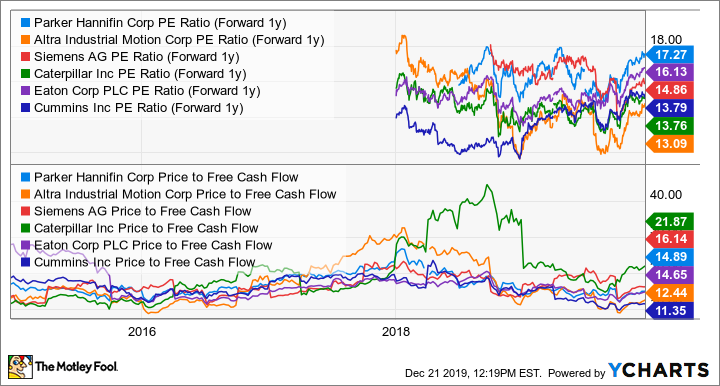 Industrial stocks contribute 13 of the 57 so-called dividend aristocrats -- stocks that have raised their dividends for more than 25 consecutive years. Moreover, a look across some of the major names in the sector suggests it's a good hunting ground for income-seeking investors. European stocks like ABB and Siemens offer very healthy yields, and even though Caterpillar, 3M, Emerson Electric, and Cummins clearly face near-term headwinds, their dividends look easily sustainable. 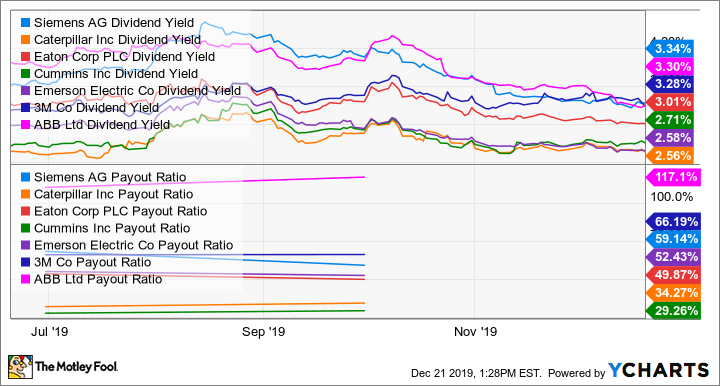 An easing of the trade war will help

The trade conflict with China has hit the industrial sector hard. Not only have its sales to the Asia-Pacific region been disrupted, but the costs of certain products sourced from China has increased as well. In the long term it's probably good news -- industrial companies need to protect their intellectual property -- but it's hurt sentiment and spending in the sector.

The good news is that any kind of easing or resolution to conflict is likely to create a tailwind for the sector, especially if pent-up capital spending has been building.

Last, but definitely not least, the underlying growth prospects from the so-called fourth industrial revolution (the industrial Internet of Things and smart technologies) is set to generate a huge amount of value for the industrial sector. Production is set to become more efficient (lowering manufacturing costs), while the market industrial companies that sell industry 4.0 solutions (automation, robotics, industrial software, etc.) will also see increased demand for their products.

These long-term trends aren't going away anytime soon, even if early adopters like the automotive and semiconductor industries experienced cyclical weakness in 2019.

All told, there's a strong case for the argument that industrial stocks could have another strong year in 2020, and investors, who can tolerate some potentially bad news in the headlines in the near term, should take a long hard look at the sector. There's a lot to like about industrial stock in 2020, but most of the good news is likely to come in the second half of the year.