Both specialty apparel retailers saw their stock prices drop by 16% or more in 2019 -- and one has a 4% dividend yield. Which one is better for an investor looking for value?

Urban Outfitters (URBN 2.14%) and American Eagle Outfitters (AEO 2.24%) are lifestyle retailers focusing on young adults and teenagers. Both companies are in the challenging apparel retail segment. With declining mall traffic and increased competition from direct-to-consumer brands and e-commerce, these companies have had to work hard to stand out. Their strategies include exclusive collaborations with designer brands like Laura Ashley (Urban Outfitters) and musicians like Lil' Wayne (American Eagle) as well as branding messages that resonate strongly with their core audience.

While both specialty retailers cited increased promotional activity during the recent holiday season, one of the companies reaffirmed its fourth-quarter guidance while the other didn't. American Eagle Outfitters and Urban Outfitters each saw strong growth in their digital businesses over the last two quarters. 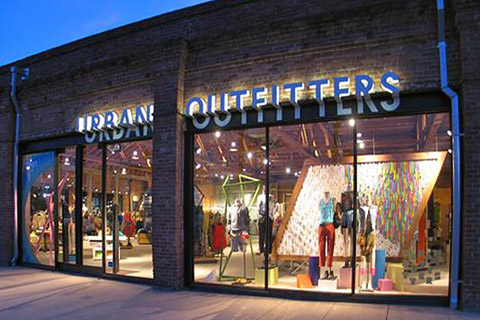 In early January, Urban Outfitters announced holiday sales results that disappointed investors. Weaker sales at its retail stores had continued from the latest quarter, offset by strength from the digital channel. For the two months ended December 31, 2019, sales increased 2.9% year over year. Comparable sales at the retailer's Urban Outfitters division was down 1%, while they increased by 8% and 5% at the Free People and Anthropologie divisions, respectively. There was a high level of promotional activity in apparel at Anthropologie and Urban Outfitters, which will pressure gross margin in the fourth quarter.

For the quarter ended October 31, 2019 (fiscal third quarter), Urban Outfitters missed expectations on both earnings and sales. Comparable sales increased 3%, but the increase came only from the digital channel, with retail store sales decreasing. While the Free People division performed well with a 9% comparable sales increase, the Urban Outfitters division's comps were down 1%. CEO Richard Hayne spoke of "excellent fashion content and superior marketing" at Free People.

On January 13, American Eagle reaffirmed its prior fiscal fourth-quarter guidance and announced that fourth-quarter comparable sales-to-date are flat following a 6% increase last year. The company saw a continuation of strength in its Aerie brand and in its denim products. CEO Jay Schottenstein commented, "We delivered another holiday season of record revenue, driven by strength in the Aerie brand and American Eagle's signature jeans collections."

The youth-focused retailer continues to innovate with new products. During its fourth quarter, American Eagle launched new women's Dream Jean styles and new men's AirFlex denim styles. It also launched MOOD, a wellness and personal care line. Aerie's growth is being boosted by new stores, with 24 opened during the third quarter. The brand's message of inclusivity is resonating with the consumer, helping drive traffic that was "well ahead of mall averages" in the third quarter.

Valuation and which stock is the better investment

Given recent results in the third quarter and the important holiday season, as well as brand strength, American Eagle is the better investment for those wanting exposure to the retail apparel space. It reaffirmed guidance for the current quarter and ranks as the second-favorite apparel brand among teens in a major research survey. Further, it sports a lower valuation and has a nearly 4% dividend.