Please ensure Javascript is enabled for purposes of website accessibility
Log In Help Join The Motley Fool
Free Article Join Over 1 Million Premium Members And Get More In-Depth Stock Guidance and Research
By John Bromels - Jan 29, 2020 at 8:21AM

The second-largest homebuilder in the U.S. by number of units sold, D.R. Horton (DHI 0.43%) reported impressive Q1 2020 earnings on January 27, sending its shares upward by about 4%. Capitalizing on continuing strength in the U.S. housing market, the company also increased its guidance for the fiscal year (which runs from October 2019 through September 2020).

Shares are now at an all-time high for the company. Here's what investors need to know. 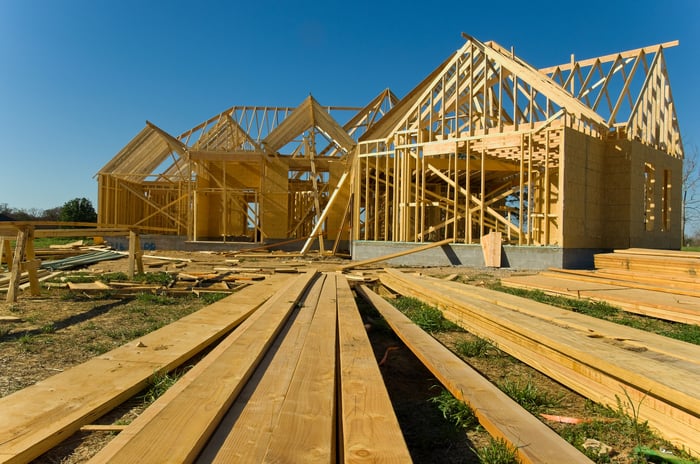 D.R. Horton, which also owns the Express Homes, Emerald Homes, and Freedom Homes brands, is one of the biggest players in a very fragmented industry. However, the company showed in Q1 that it isn't too big to grow:

Investors shouldn't be concerned about the sequential drop in numbers: Home sales tend to be stronger in the July-September period (Horton's Q4) than in the colder October-December months (Horton's Q1), which has historically been Horton's weakest quarter of the year.

The year-over-year changes, though, are very impressive, even considering that the prior-year quarter coincided with a spike in mortgage interest rates. To be able to translate a 14.3% increase in revenue into more than three times that percentage in net income growth shows how well the company is executing its strategy.

Things are going so well that just one quarter into the fiscal year Horton is already slightly raising the upper end of its full-year guidance, though admittedly not by much: from revenue of $19.0 billion to $19.1 billion, and from 61,000 homes sold to 61,500. However, the small size of the increase shouldn't bother investors. It's early in the year, and Horton tends to be conservative with its projections.

CEO David Auld isn't much of a talker. Even in earnings press releases, he usually lets founder and Board Chairman Donald R. Horton provide the quotes. So, on the Q1 2020 earnings call, Auld was typically understated considering how impressive the quarter's numbers were:

These results reflect the strength of our operational teams, our ability to leverage D.R. Horton's scale across our broad geographic footprint and our product positioning to offer homes at affordable price points across multiple brands. We continue to see good demand and a limited supply of homes at affordable prices across our markets while economic fundamentals and financing availability remain solid.

Our strategic focus is to continue consolidating market share while growing our revenues and profits, generating strong annual cash flows and returns and maintaining a flexible financial position. With a conservative balance sheet that includes an ample supply of homes, lots and lands for growth, we are well positioned for the remainder of 2020 and future years.

The U.S. housing market is booming right now, thanks to a number of factors.

According to Freddie Mac, the current average rate on a fixed 30-year residential mortgage is just 3.6%. It hasn't gone higher than 3.8% since July 2019. That's lower than rates have been since 2016, so it's unsurprising that new home sales are at their highest level since the Great Recession, according to data from the Department of Housing and Urban Development.

Horton is also benefiting from its geographic mix of homes. More than 60% of the company's home inventories are in the "southeast" and "south central" regions, according to Horton: 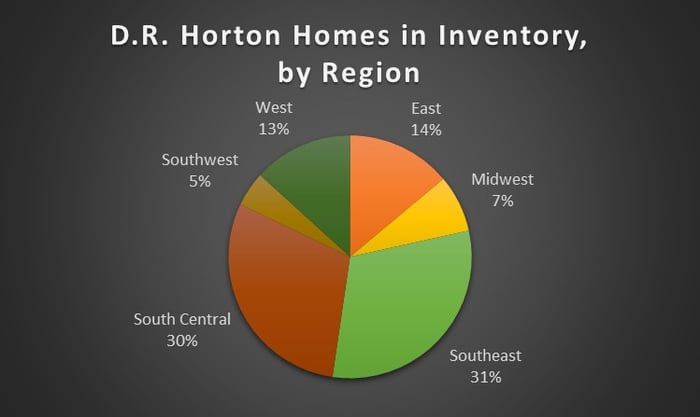 According to HUD data, sales of homes in the "South" (which roughly aligns with those two regions) were up 40.1% between October 2018 and October 2019. Other regions of the country only saw increases of 17% to 22%. In other words, Horton is in the right place at the right time. Now it just needs a strong market (and strong economy) to last as long as possible.

D.R. Horton is one of the first homebuilders to report its earnings this season, so it's not clear if other companies are going to post similarly strong numbers. However, even with shares at an all-time high, the company is currently trading at just over 13 times earnings, near the lower end of its peer group. It's looking very compelling for those interested in top stocks in this industry.