Wednesday has been a choppy day on Wall Street, as major market benchmarks initially moved significantly higher but saw those gains diminish as the session went on.

News from China on the coronavirus outbreak remains unclear, and U.S. market participants are also looking for the latest signs from the Federal Reserve about whether central bank monetary policy will support further economic growth and be able to fight back against any downward pressure from global health issues. As of 11 a.m. EST, the Dow Jones Industrial Average (^DJI 2.68%) was up 104 points to 28,827. The S&P 500 (^GSPC 3.06%) had risen 5 points to 3,281, and the Nasdaq Composite (^IXIC 3.34%) was higher by 10 points to 9,280.

Among much-followed companies, Beyond Meat (BYND -2.46%) got some mixed news, but investors didn't have a huge reaction to the latest on the meat-substitute specialist's partnerships. Meanwhile, L Brands (BBWI 4.77%) soared on speculation that the company might move forward with plans to work on rehabilitating the Victoria's Secret brand in a way that could benefit shareholders.

No more Beyond Meat for Tim Hortons

Shares of Beyond Meat were down less than 1% on Wednesday morning, even though the meat-substitute company received unfavorable news from north of the border. Still, some good news in the U.S. helped to offset worries about Beyond Meat's future in the food industry.

In Canada, Tim Hortons restaurants in the provinces of Ontario and British Columbia halted their test of Beyond Meat products. The locations had offered the meat substitute both on a burger and in a breakfast sandwich, but in the words of a spokesperson, "The product was not embraced by our guests as we thought it would be." That's not the response that Beyond Meat investors wanted to hear from a key test of its products by a popular restaurant chain in Canada. 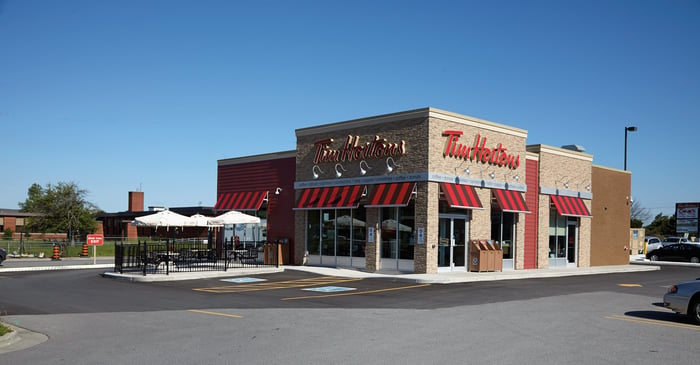 The news wasn't all bad for Beyond Meat. KFC agreed to expand its trial of meatless chicken products from the plant-based food company, with select restaurants offering Beyond Fried Chicken beginning Feb. 3 in the Charlotte and Nashville areas. The test will last just three weeks, but shareholders hope that it will again validate Beyond Meat's growth ambitions. With demand for new chicken products in the U.S. at high levels, it's a good time for the KFC rollout.

Beyond Meat remains a controversial stock, but tests like these will provide useful input for both sides to consider. For now, the jury's still out on whether plant-based meat substitutes will be around for the long haul or just be a passing fad.

L Brands saw its stock jump 12% on reports that the company is looking more seriously at making major strategic moves. The company behind Bath & Body Works and Victoria's Secret stores has considered drastic action before, but today, the company looks closer than ever to pulling the trigger.

CEO Les Wexner is reportedly discussing plans that could result in his leaving the company, according to The Wall Street Journal. In addition, the company is looking more closely at strategic alternatives involving Victoria's Secret. That could lead to a decision to sell all or part of that business, or to spin it off to shareholders as a separately traded stock.

Results at L Brands have been sharply mixed in recent periods. Bath & Body Works has had stunning growth, defying the downward trends that many mall-based retailers are seeing and keeping investors optimistic. But Victoria's Secret has had a tough time, with demand for its lingerie and other products waning.

Even with today's gains, L Brands stock is still down between 10% and 15% over the past year. If the retailer can craft the right strategic plan, though, investors are hopeful that today's bounce will be just the beginning of a longer rally.