Please ensure Javascript is enabled for purposes of website accessibility
Log In Help Join The Motley Fool
Free Article Join Over 1 Million Premium Members And Get More In-Depth Stock Guidance and Research
By Taylor Carmichael - Jan 30, 2020 at 10:29AM

Right now you can buy an interstellar airline, a vaccine specialist, and an oil tanker company -- all on sale.

One of the more exciting things in the stock market is when you buy a stock for under $20 and you catch a double. It's exciting because that (usually) means that you were right, and the market was wrong -- and your vision is vindicated. That's not only a huge boost to your ego, but it can also make for a nice increase in your brokerage account.

Virgin Galactic (SPCE -0.46%), Novavax (NVAX -8.57%), and Nordic American Tankers (NAT -4.64%) are three stocks that were all down into the single digits last year (two of them still are as of this writing). But market sentiment has changed dramatically for all three, and the stocks have doubled off their lows. Is there more room to run? 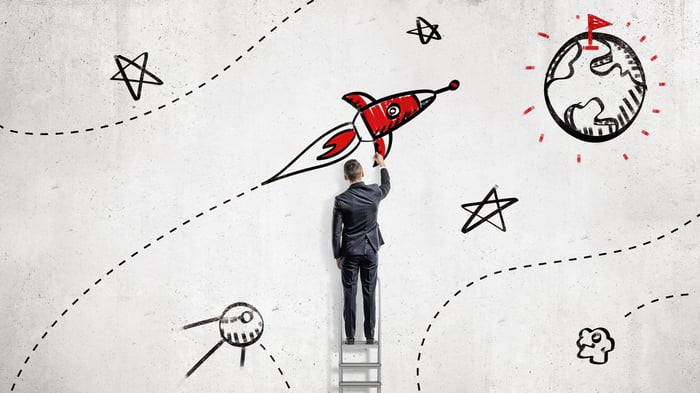 Should you buy this rocket ride?

The space airline Virgin Galactic had a strange non-IPO last year. Instead of the traditional method of being introduced into the market by investment bankers (who may or may not value your shares fairly), the company elected to do a reverse merger into a shell company that was already on the market. So it kind of snuck into the stock market.

On the first day, the stock was flat, closing at $11.75 a share. Then it fell dramatically to $7.22 in early December. And that's when the bulls rushed in. The price was all the way up around $18 recently. That's a nice 150% increase in less than two months. Its current market cap is $3.6 billion.

Virgin Galactic is a speculative play, not for the faint of heart. It's similar to a biotech stock in that the company has neither earnings nor revenue. It hopes to start charging citizens for space travel later this year.

On the positive side, its competitive moat is huge. The company has only two real competitors in its race to the stars: Blue Origin and SpaceX (both private). These companies were all founded by billionaires at the beginning of the 21st century. Jeff Bezos started Blue Origin in 2000 and said he was liquidating about $1 billion a year of Amazon.com stock to fund it. Tesla founder Elon Musk founded SpaceX in 2002, and Sir Richard Branson founded Virgin Galactic in 2004.

These three men have sunk billions into their dreams (and a sum total of 54 years of research and development). Like its two private competitors, Virgin Galactic is a high risk, high reward investment, with an upside as big as the galaxy.

Novavax was killed by the market last year, dropping all the way down to micro-cap status. When its drug for RSV (respiratory syncytial virus), which causes lung infections, failed its phase 3 trial, the company did a 20-for-1 reverse split so its shares could stay listed on the Nasdaq. Even after the split, shares dropped all the way to $3.69 by the end of 2019.

That's a lot of negativity priced into the stock. If there's any good news, there is plenty of upside. Already, the stock is up 99% in less than two months. Shares now trade around $7.33.

What made the shares bounce back so quickly? Over the last week, the coronavirus scare in China helped Novavax skyrocket overnight. No drug company has a vaccine for this unknown virus yet. And under ordinary protocols, it would take any company years to get one on the market. Nonetheless, whenever the market takes a coronavirus-related dive, shares in this vaccine specialist go positive in a big way.

But the immediate value driver for Novavax is its shot for the flu, NanoFlu, which is in phase 3 trials. NanoFlu bested the market-leading flu shot from Sanofi over and over in clinical trials so far. The company expects to report its phase 3 results by the end of the first quarter. The flu kills a lot of people, and there's a $5 billion market opportunity in a vaccine that works. If tiny Novavax, with a market cap of just $250 million, beats Sanofi once more, its stock should skyrocket.

Is it time to buy oil tankers?

Oil stocks have been awful investments of late, and oil tankers have been hit particularly hard. Nordic American Tankers was selling for $53 a share 15 years ago. It's been a dramatic fall since then, all the way down to $1.71 a share in September 2019. Since then, the stock has made a dramatic comeback, rising 129% in four months.

And it's still dirt cheap. Nordic has a price-to-sales ratio of 1.72. It's trading below its book price (0.99). And this is after the stock has doubled.

What has made this beaten-down stock jump so far and so fast? Business is booming right now. The dayrate for tankers jumped to $70,000. According to ship brokerage Poten & Partners, the earnings for Suezmax tankers have risen 350% on average over the last four months, and Nordic has 23 Suezmax tankers.

The demand has continued into the new year. In a recent letter to shareholders, the company reported that its dayrate at the beginning of the year was more than $100,000. It's five most recent contracts averaged over $62,000 a day. The daily operating cost of the vessels is about $8,000 per ship. The company reports its earnings on Feb. 17, and shareholders can't wait to hear the good news.