Please ensure Javascript is enabled for purposes of website accessibility
Log In Help Join The Motley Fool
Free Article Join Over 1 Million Premium Members And Get More In-Depth Stock Guidance and Research
By Mark Prvulovic - Jan 30, 2020 at 8:00AM

Why are some experts worried that a massive, billion-dollar-plus goodwill adjustment is on the horizon?

The landscape of cannabis investing has changed significantly between 2019 and 2020, and many of the largest, most respectable pot stocks have lost their allure. Despite starting the previous year as many analysts' favorite pot stock, Aurora Cannabis (ACB -38.46%) has quickly lost a lot of its appeal in a relatively short time.

While the company continues to report losses, some experts are worried that there's a bigger issue that threatens the company's financial situation. Specifically, Aurora has over 3.2 billion Canadian dollars in goodwill on its balance sheet, a shockingly high figure when one considers the company's market cap is only at CA$2.7 billion. Since companies are required to audit and evaluate their goodwill at least on an annual basis, some experts are worried that Aurora could end up reporting a goodwill adjustment in the billion-dollar-plus range.

Should investors be worried about this? Let's take a deeper look at the situation. 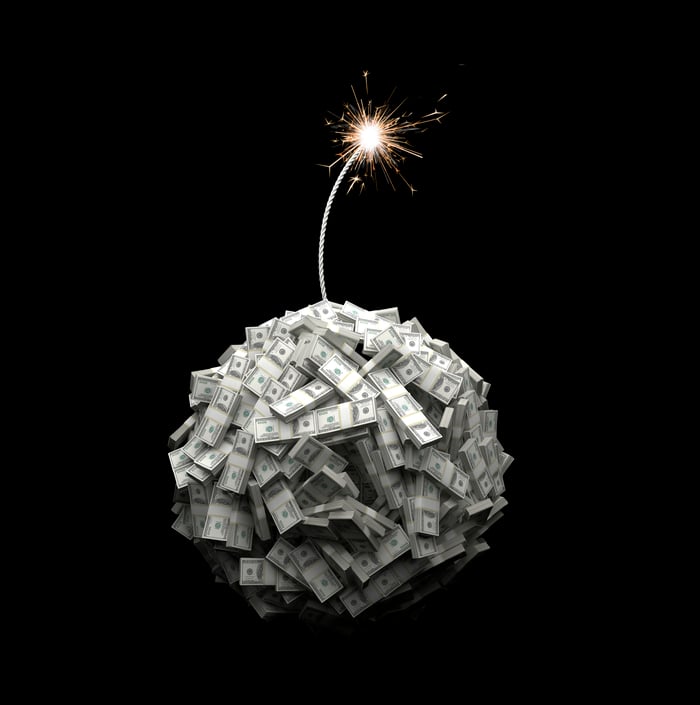 What are goodwill adjustments?

While it's easy to value certain types of assets, it's hard to put a dollar amount on the more intangible aspects of a company, such as brand recognition or its portfolio of patents. Goodwill is essentially how much someone is willing to pay for these assets, and in an acquisition situation, the goodwill would be the final buyout price subtracted by the value of all regular (tangible) assets and liabilities of the company.

Publicly listed companies are required to evaluate how much their goodwill is worth at least once a year. A goodwill impairment -- or writedown -- is an accounting charge that happens when the goodwill value of an intangible asset is determined to be worth less than what it was previously bought for.

Why Aurora Cannabis in particular?

Other major cannabis stocks have goodwill as well. Canopy Growth reported CA$1.9 billion in goodwill for its fiscal second quarter in November, which represents around 19% of its total CA$9.9 billion market cap. Aphria reported CA$670 million in goodwill, which comes in at a bigger 37.2% of its CA$1.8 billion market cap. You can see how other major cannabis companies fare in this regard below.

In comparison, Aurora has CA$3.2 billion in goodwill, 118% of its CA$2.7 billion market cap. With so much goodwill on the company's balance sheet, a big adjustment could erase billions of dollars of Aurora's valuation, wiping out much of the company's market value and pushing the stock down in the process.

While much of this goodwill could be justified back when pot stocks were trading well, the investing climate has changed dramatically, and it will be hard for companies to convince auditors that the high price of goodwill is worth the same it was 12 months ago. That's exactly what some analysts are now predicting will happen. MKM Partners analyst Bill Kirk said he expects Aurora to make "massive writedowns" somewhere in the tune of $2 billion sometime in the near future.

What are the deeper implications?

Should Aurora end up facing significant goodwill impairments, this could be just the beginning of a much bigger financial disaster in the making. The company has taken a number of loans to finance its operations, with one of the biggest being a CA$360 million agreement from Bank of Montreal that's due August 2021.

The problem is that this loan comes with a few terms. One of which is that the company needs to keep its debt-to-EBIDTA ratio below four starting September 2020. That's already a target that some financial experts consider to be hard to achieve, but even if Aurora can make it work, there's an even more problematic issue concerning its debt agreement.

This wouldn't be the first time that Aurora failed to meet a loan stipulation either. In 2018, the company confirmed it failed to comply with another BMO loan which required it to keep 90% of its cash in an account with the bank. Aurora also failed a financial test that would allow it to access a further CA$50 million in funding. While these setbacks weren't considered as big of a deal when the company's outlook seemed positive, the growing skepticism surrounding Aurora's fiscal situation could trigger a sterner response from creditors if the company ends up breaking its end of the deal.

There are also signs that Aurora is considering selling off more assets. The company listed a 22-acre greenhouse at the Exeter, Ontario, facility for sale, asking for CA$17 million as an initial price. This greenhouse was just one of many assets acquired by Aurora's earlier MedReleaf acquisition in 2018 for $3.2 billion.

Multiple Wall Street analysts have warned that Aurora Cannabis could easily see its share price fall to $1 per share, or even worse, as little as $0. While becoming a penny stock certainly is the worst-case scenario for the cannabis company, there's good reason to worry that the stock could take a substantial hit in the next few months.

Do I think that a major goodwill adjustment is on the horizon? Probably. Do I think that it will be the end of Aurora Cannabis? Probably not. What does seem likely, however, is that shares of Aurora have plenty of room to fall even further in the future in light of these aforementioned concerns. On a more optimistic note, Aurora could report better-than-expected revenue numbers thanks to cannabis 2.0 sales, which include products such as CBD-edibles, beverages, and oils. However, it's uncertain whether this will be enough to help the cannabis giant turn a profit, let alone deal with the looming threat of a goodwill adjustment (although a healthier bottom line can certainly help restore investor/creditor confidence).

In the end, there's a lot to be worried about and not that much to be hopeful for. As such, Aurora Cannabis doesn't seem like a company that you should be keeping your money in right now.