Please ensure Javascript is enabled for purposes of website accessibility
Log In Help Join The Motley Fool
Free Article Join Over 1 Million Premium Members And Get More In-Depth Stock Guidance and Research
By Rhian Hunt - Updated Jan 30, 2020 at 9:50AM

The company looks to make sweet, melt-in-your mouth profits with its new restaurants.

Back in July 2019, The Cheesecake Factory (CAKE -1.86%) decided to acquire Fox Restaurant Concepts, snapping up its smorgasbord of casual and casually upscale dining brands, along with separate brand North Italia. The Cheesecake Factory greatly diversified the styles and cuisines on its corporate menu with the acquisitions, appealing to everyone from vegans to paleo aficionados and people hungering for ethnic cuisine. With its many new restaurants, the company aims to whip up a feast of profitable growth going forward -- provided it can reach its unit growth targets.

Where The Cheesecake Factory started and what it got

While not showing skyrocketing growth, The Cheesecake Factory's position when it closed the acquisitions mark it as a well-run business. Investors enjoy a 3.7% dividend yield, and the company has consistently achieved a strong return on invested capital -- between 12% and 17% annually -- since 2010. To maintain the dividend, The Cheesecake Factory repurchases approximately 3% of weighted average outstanding shares annually.

The Cheesecake Factory dished out cash amounting to approximately $308 million at closing to acquire Fox and $130 million in cash for North Italia, with around $45 million more due over the next four years. The deals raise The Cheesecake Factory's total number of restaurants to 292 in North America and 26 overseas. 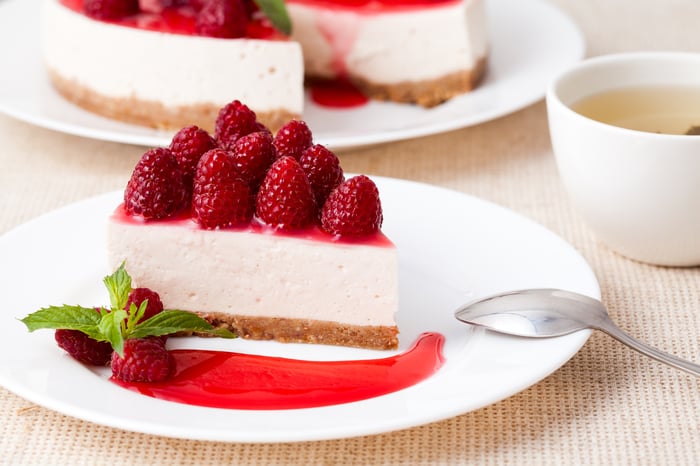 While many of Fox's 50 or so restaurants cluster in Arizona, its locations span eight other states and Washington, D.C. North Italia has outlets in 11 states plus the capital. Fox's "concepts" feature distinctive menus and carefully tailored atmospheres. Run-rate revenue for North Italia and Fox stand at approximately $150 million and $250 million, respectively.

According to The Cheesecake Factory's October 2019 investor presentation, it intends to push North Italia most vigorously of all its freshly acquired brands. The chain currently operates 21 locations in the U.S., but The Cheesecake Factory is aiming for unit growth of a minimum 20% per year. The long-term target is 200 new North Italia restaurants.

Supporting this idea, research by the National Restaurant Association pegs Italian food as the No. 1 ethnic food in the U.S. with 61% of respondents eating it frequently. It outranks even highly popular Mexican food, eaten frequently by 50% of survey participants. Of Italian food diners, 61% prefer eating at the restaurant rather than ordering delivery or takeout, a good fit for North Italia's focus on atmosphere and an enjoyable dining environment.

According to analyst estimates, the acquisitions will trigger significant 2020 revenue growth. Revenue is projected to increase from 2019's estimated $2.46 billion to $2.95 billion, or a 20% year-over-year rise. Though earnings growth is expected to fall in the mid-single-digit range for 2020, it should accelerate to 10% by 2021.

Can The Cheesecake Factory deliver?

The Cheesecake Factory is clearly banking on its North Italia and Fox Restaurant Concepts acquisitions as crucial growth drivers moving into the future. Given the projected revenue and earnings growth, the popularity and profitability of the brands, and the potential for expansion, this appears to be a good bet.

However, the company did take on significant risk paying over $400 million for these new brands, depleting its cash reserves and taking on a sizable debt burden. Additionally, The Cheesecake Factory's executives are not known for pursuing aggressive expansion, raising questions about the feasibility of the aggressive annual unit growth.