The chipmaker narrowly beat Q4 2019 earnings expectations, but uncertainty in 2020 could drive the stock lower.

Propelling AMD's extraordinary growth in 2019 was its progress in gaining additional market share, roughly 5% year over year, from long-term rival Intel (INTC -1.19%) and a rise in its graphics card business. Although these catalysts show promise, the stock is trading lower after reporting fourth-quarter earnings on Jan. 28.

What are the differences between a chip, a processor, and a graphics card? A graphics card facilitates the display of images from computer data. It's different from a chip, or a microchip, which is a wafer of semiconductor material that stores the processor and the memory unit called Random Access Memory (RAM). The processor is the central processing unit, considered to be the "brain" of the computer. 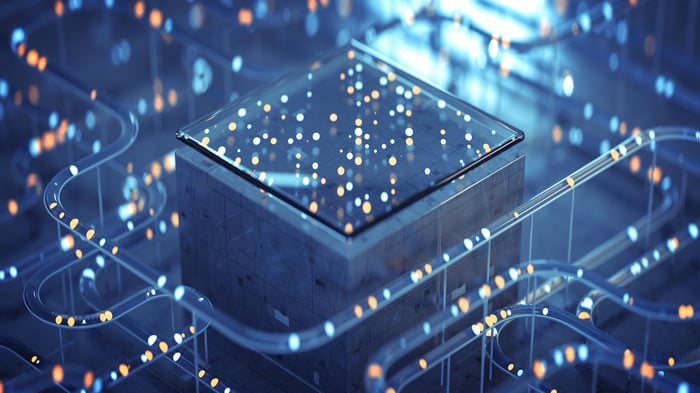 Although top- and bottom-line results were stellar, a few segments of AMD's business missed estimates. The positives came from its computing and graphics segment, reporting revenue of $1.66 billion, $160 million higher than analyst expectations. This segment focuses on graphics cards and chips, featuring products including Ryzen processors and Radeon graphics cards.

Growth in this segment helped AMD offset lower revenues from its enterprise, embedded, and semi-custom segment, which had mixed results. This segment contributed to $465 million revenue, $142 million lower than projected. This segment focuses on chips for servers and custom-made chips including EPYC processors. The key area of declining revenue from the semi-custom sales were partially offset by the success in EPYC processor sales. This breakdown shows that the chipmaker faces some difficulties in its enterprise, embedded, and semi-custom business, especially with sales of its semi-custom product.

With these difficulties presented, investors may want to pay close attention to the outlook for clues on the trajectory of the stock.

AMD expects revenue in its first quarter to be $1.8 billion, plus or minus $50 million, suggesting a 42% annualized growth from the prior year, driven by growth in the computing and graphics segment from sales of Ryzen processors, Radeon graphics cards, and EPYC processors. However, this quarterly revenue target would represent a 15% sequential decline, softened by semi-custom revenue slowing as the company advances its next-generation products as well as impacts from seasonality.

This light forecast implies that the chipmaker may not successfully achieve its targets, especially from a declining product line such as semi-custom. When considering the full-year forecast, AMD expects about 28% to 30% revenue growth over the prior year. This growth rate seems like an achievable target for the chipmaker considering the successful year it just had reporting full-year revenue of $6.73 billion, thanks to increased sales in its computing and graphics segment.

Investors should consider potential risks that could weigh on the stock's value. AMD's major region of international business is China -- the chipmaker's largest market for desktop and notebook PCs. An economic slowdown or imposed tariffs affecting China could create unfavorable risks for AMD.

When considering the competitive landscape between AMD and Intel, Intel dominates 82% of the market for desktop processors. Although AMD has an 18% market share, the company can win business and generate more revenue from companies focused on large data centers that use processors for servers.

AMD shows strength over Intel in the development of smaller transistors, with the chipmaker able to develop chips at seven nanometers, while Intel failed to bring a 10-nanometer chip to the market. The smaller the transistor, the more efficient and faster the chip. AMD's ability to develop chips with smaller transistors shows promise for the company longer term as it moves to focus on sales from PCs, data centers, and new gaming consoles.

However, Intel seems to be a better investment over AMD in the short term because Intel beat estimates for data center revenue by 13.8% in its Q4 2019 earnings. Although the cloud and data center businesses are unpredictable, Intel could possibly leverage its strengths over AMD's declining segments.

With that in mind, investors should consider the current valuation of AMD through its PEG ratio. This metric provides an accurate valuation measure, and investors should understand that a value of 1 is a perfect correlation between P/E ratio and projected earnings growth. A value greater than 1 implies overvaluation, while a ratio less than 1 suggests undervaluation. AMD has a PEG ratio of 0.99, implying that it's approaching overvaluation.

To get a better sense of analyst expectations, it's helpful to make a comparison of the trailing and forward P/E ratios. A higher forward P/E implies that the market thinks the company is likely to see growth. AMD's forward P/E ratio, a measure of share price relative to per-share earnings, is 31.05. When comparing this metric against its trailing P/E (158.37), this suggests that the market expects AMD will see less growth compared to the prior year.

In 2019, the annual results showed that gross margin, a metric that measures efficiency toward making goods and services, was driven by sales of key products such as Ryzen processors and EPYC processors. While sales of these products will keep growing, other business segments may offset revenue. These financial metrics suggest AMD's stock could fall as its valuation is corrected.

Investors who currently own AMD may want to consider the short-term risks and take some profits off the table. The recent earnings report, future outlook, and current valuation offer clues to potential investors, suggesting the stock may have reached its peak and is not an attractive investment for the long term.

Investors should consider buying Intel because recent success shows it's a tech stock that's better positioned to capitalize on the data center business in the near term.