Please ensure Javascript is enabled for purposes of website accessibility
Log In Help Join The Motley Fool
Free Article Join Over 1 Million Premium Members And Get More In-Depth Stock Guidance and Research
By Rich Duprey - Jan 31, 2020 at 11:30AM

After causing the tobacco giant to swing to a fourth-quarter loss, the e-cig leader's future isn't looking bright.

Altria (MO 0.02%) decided to write off another huge chunk of its investment in JUUL Labs after all.

Although I said it was a gimme that the tobacco giant would take more charges against its $12.8 billion bet this year because of the unrelenting campaign against the electronic cigarette manufacturer, I didn't think it would happen so soon. It had just written off $4.5 billion on JUUL a couple of months ago, but Altria revealed in its fourth quarter earnings report that it needed to eliminate another $4.1 billion of the investment's value.

It seems a sure thing this won't be the last one either. 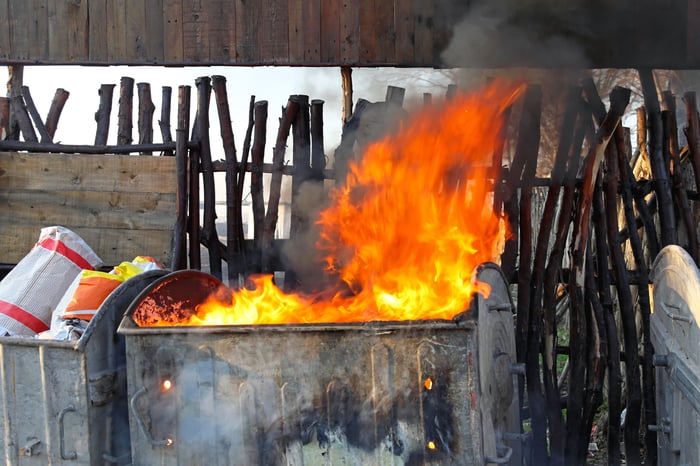 An anchor on performance

Altria reported fourth-quarter revenue net of excise taxes inched higher during the period, rising 0.3% from the same quarter a year ago, hitting $4.8 billion. Excluding the impairment charge to JUUL, adjusted earnings came in at $1.02 per share, a 7.4% increase over last year.

Yet the JUUL investment remains the elephant in the room at the moment and on a GAAP basis. Taking another massive writedown on the e-cig maker caused Altria to swing to a $1.00 per share loss for the quarter. And even Altria seems resigned to the fact that there is more to come.

The tobacco company said that in the three months since it took the last impairment charge, the number of lawsuits against JUUL has skyrocketed 80%, though Altria said it's not making any judgments on the outcome of these cases as anything can happen.

One of those possible outcomes, however, is that JUUL goes bust. The value of Altria's investment has been reduced to a third of where it started. If JUUL can't make the Food & Drug Administration's deadline for submitting its premarket tobacco product application (JUUL says it will), or if it can't successfully navigate through the regulatory approval process (the agency's former commissioner says he doesn't see how it can), it could very well mark the end of what was (and currently still is) the most popular e-cig on the market.

While Altria's earnings were dominated by JUUL, the cigarette maker did have other, mostly positive, developments to report.

Philip Morris International's (PM -0.88%) IQOS heated tobacco device has expanded beyond the original Atlanta test market into Richmond, Virginia, and should be introduced elsewhere soon. It does seem, however, that Altria is slow-walking the rollout.

The on! nicotine pouch business it bought from Burger Sohne is also available in 15,000 stores nationwide, and in-house production of the cigarette alternative is slated to begin in the first quarter of 2020.

The new business has a lot of potential, but California is proposing to ban all flavored tobacco products and their derivatives, including nicotine, which would ensnare these tobacco-free lozenges. If other states follow California's lead, Altria could run into the same sort of problems it has with JUUL.

There are additional headwinds Altria faces. The minimum age to buy tobacco products has been raised to 21 at the federal level, and while the cigarette company fell in line saying it supported the increase, it's going to affect cigarette sales. Altria already forecasts the industry will suffer another 4% to 6% decline this year.

It also still hasn't gotten antitrust clearance from the Justice Dept. for its investment in JUUL, over a year after having made it. Despite still expecting to receive it -- or at least putting on a brave front that it will -- Altria renegotiated the terms of its investment in the e-cig maker.

It will now have a say in appointing two directors to JUUL's board and it will be released from its e-cig non-compete clause if JUUL doesn't get FDA premarket approval. More ominously, Altria says if the value of its investment in JUUL falls below 10% of the original amount, it will also be released from the clause.

That almost seems like a certainty, but don't expect Altria to reenter the e-cig market. Its partnership with Philip Morris for the IQOS ought to give it sufficient exposure.

Finding a way through

Altria isn't quite as invested in a smoke-free future as Philip Morris is, but its portfolio of non-combustible cigarette alternatives is substantial and the tobacco giant still seems to be making progress.

The ill-timed investment in JUUL continues wreaking havoc on its performance, and undoubtedly it will continue to do so until it finally washes its hands of the fiasco -- or until the FDA does it for the company.