Please ensure Javascript is enabled for purposes of website accessibility
Log In Help Join The Motley Fool
Free Article Join Over 1 Million Premium Members And Get More In-Depth Stock Guidance and Research
By Justin Cardwell - Feb 1, 2020 at 6:00AM

This global agribusiness and food ingredient company is set to benefit as trade negotiations ease.

U.S. agriculture exports to China decreased by 63% between 2017 and 2018, which had widespread impact on U.S. agriculture businesses. Chinese purchases of U.S. agriculture dropped from $15.8 billion to $5.9 billion, based on calculations from the International Trade Administration.One of the many businesses affected was Bunge Limited (BG -1.01%), an agribusiness and food ingredient company.

Poor performance in back-to-back quarters left Bunge vulnerable to takeover attempts by industry rival Archer Daniels Midland and commodities trader Glencore, both of which Bunge was able to fend off. As pressure to perform increased, Bunge struck a deal with activist investors Continental Grain and D.E. Shaw in 2018 to replace Soren Schroder as CEO with Greg Heckman, in addition to bringing on a new CFO, John Neppl, and four new board members. Heckman said the new Bunge was about "simplification, accountability, and speed," with the intention of generating efficiency and improving shareholder value.

This renewed leadership, in addition to easing tensions between the world's two largest economies, may deliver an upside for investors looking to invest in the food processing industry. 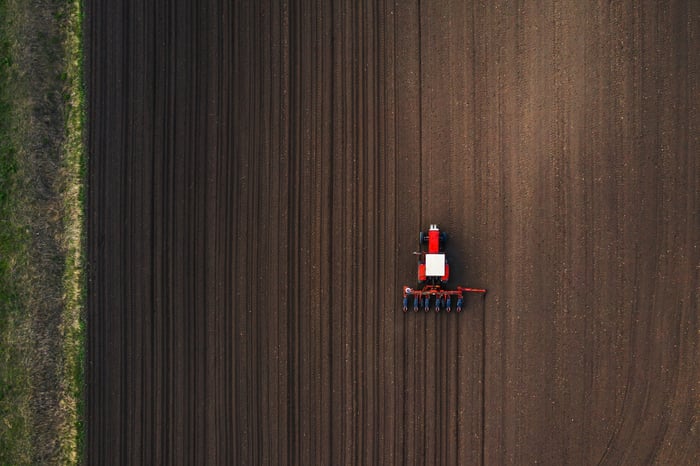 The 18-month trade war between the U.S. and China was intended to stop Chinese intellectual property theft and correct a continuing trade deficit. The two sides recently finalized a phase one trade deal in which China agreed to some of the United States' terms, one of which was to purchase $200 billion of U.S. goods over two years -- including $40 billion to $50 billion in U.S. agriculture.

The easing trade tensions have brought optimism to the U.S. agriculture industry. American Farm Bureau President Zippy Duvall said, "China was once the largest market for U.S. agriculture products but has dropped to the fifth-largest since retaliatory tariffs were introduced. This agreement will help turn around two years of declining agricultural exports."

There are several factors lining up to make investors optimistic concerning an eventual end to the trade war, leaving investors who are positioned correctly in the market to benefit.

Bunge maintains a well-diversified oilseed capacity of soy, canola, sunflower seed, and rapeseed. It also maintains a diversified global portfolio of operations in the U.S., Europe, South America, and China, with total capacities at 27%, 26%, 33%, and 14%, respectively.

The company has been hurt by the economic friction between the U.S. and China, however, Bunge's diversity allows for flexibility throughout the globe -- decreasing the risks of geopolitical influence. Schroder, Bunge's former CEO, said in an interview that "if there is a problem in one part of the world, we can solve it in another." Overall, Bunge is set to benefit as trade negotiations improve, which allows revenues and profitability to improve as well.

One useful metric for determining the overall risk to shareholders concerning a company's ability to pay off incurred debt is its ratio of debt to EBITDA (earnings before interest, taxes, depreciation and amortization). Companies with high debt to EBITDA may not be able to pay the debt, potentially leading to a lower credit rating for the company, leaving shareholders and bondholders at a high risk of ownership. Bunge's debt is predicted to decrease into 2021, with a projected debt-to-EBITDA of 3.23 in 2019, and 2.58 in 2021. These estimates are based on the current long-term debt of $4.58 billion decreasing $599 million to $3.981 billion in 2021.

The affordability of the debt interest, calculated by dividing EBIT by interest expenses, is currently 2.41 (using a trailing 12-month interest expense of $323 million and the a trailing 12-month EBIT of $778 million), after adjusting for an impairment charge of $1.524 billion which Bunge used for the classification of the Brazilian sugar and bioenergy operations held for sale.

The high net interest cover above 1.5 shows that Bunge can afford interest payments, and a decreasing debt-to-EBITDA ratio shows that the total debt load is decreasing, leaving Bunge able to withstand an increasing dividend -- assuming debt decreases and net income grows in proportion with the dividend.

The affordability, growth, and track record of Bunge's dividend payouts are good indicators of the potential strength of the company and the sustainability of the dividend.

Bunge's payout ratio, which shows the proportion of earnings paid out as dividends, is about 70%. As the payout ratio increases, investors will take on additional risk as the company cannot continue paying higher amounts of earnings than the company is taking in. This level becomes concerning for shareholders if net income flattens or decreases, raising the payout ratio to unaffordable levels. Fortunately, this doesn't seem to be the case for the company going forward.

Bunge's dividend growth has been impressive, with a five-year compound annual growth rate (CAGR) of 9.34% paying a growing dividend for 17 years. Even with a large debt load, Bunge's forward dividend yield of 3.88% is impressive and can be expected to continually deliver for investors.

As geopolitical tensions ease, shareholders can expect to benefit

Bunge is currently trading with a forward price to earnings of 19.00, which is in line with the food processing industry, in addition to the sustainability and growth of the current forward dividend yield of 3.9%.

Investors need to keep an eye on the financial health of Bunge, as the company currently carries $7.18 billion in total debt -- however, at the moment, the debt load is sustainable for the company. Investors looking for a well established and growing dividend should consider Bunge, as the company is set to benefit during easing geopolitical tensions.