Please ensure Javascript is enabled for purposes of website accessibility
Log In Help Join The Motley Fool
Free Article Join Over 1 Million Premium Members And Get More In-Depth Stock Guidance and Research
By Billy Duberstein - Feb 1, 2020 at 9:35AM

And shareholders should be encouraged.

Naspers (NPSNY 5.73%) is mostly known for its giant stake in Chinese internet conglomerate Tencent (TCEHY -0.24%), a massive investment win that Naspers made all the way back in 2001. The Tencent investment was certainly a blessing for Naspers over the long-term, transforming the South African media company into a global technology investment powerhouse.

However, that blessing became a curse when Tencent's skyrocketing size soon made Naspers too large a company for the relatively small Johannesburg Stock Exchange, making up around 25% of the entire market as of early 2019. Since many asset managers and indexes couldn't allocate full positions to Naspers because of its size, its share price has been "trapped" at a discount to its Tencent stake for some time.

Naspers took a big first step last year when it spun off its non-South African technology assets into a separate company called Prosus (PROSY 2.75%), which was executed in September, and in which Naspers retained a 73.8% stake. Though that led to some narrowing of the discount between Prosus and the value of its Tencent stake, the narrowing was fairly minor, and left much to be desired. Even worse, Naspers continued to trade at a stubborn discount even to the value of its Prosus stake afterwards.

Fortunately, this move does not appear to be a "one and done," as Naspers just recently took another small, yet meaningful action toward closing that wide valuation gap. 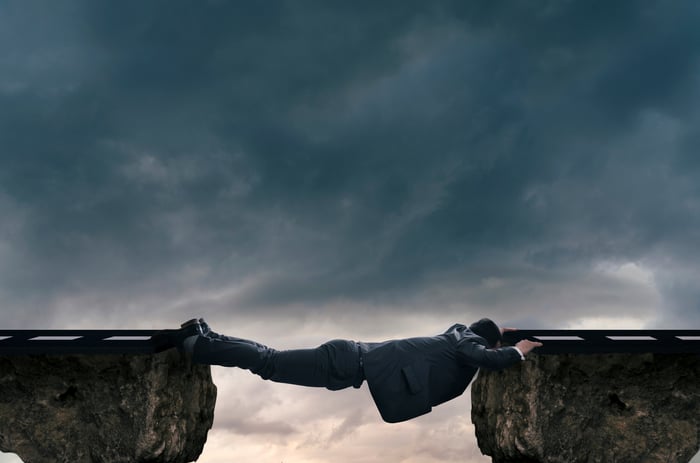 On Jan. 21, Naspers proposed selling more Prosus shares to institutional investors in Europe, and closed the sale the very next day. Naspers wound up selling 22 million Prosus shares, which amounted to 1.4% of Prosus' free-float, bringing Naspers' share of the company down from roughly 73.8% to 72.5%. The final sale was made at 67.50 euros, a discount to where shares were trading at that time, but a bit higher than Prosus' current share price after a week of coronavirus fears.

The sale brought in around 1.5 billion euros, or about $1.66 billion in U.S. dollars to Naspers. In a bit of good news for Naspers shareholders, Naspers announced it plans to use the proceeds for a share repurchase program.

Though the proceeds only amount to around 2% of Naspers' market capitalization, since Naspers currently trades at a discount to its Prosus stake, any buyback would be value-add. Naspers' current market cap is only $71.9 billion, about a 17% discount to the value of its stake in Prosus. So if Naspers quickly repurchases stock, it will see an immediate 17% rate of return.

Of course, Prosus also trades a steep discount to the value of its own assets, so Naspers is essentially selling a cheap stock in order to buy even cheaper stock. That may be why the company is only "dipping its toe" in the sale-and-buyback process at this point. Prosus trades at just a $116 billion market cap, but the value of its 31% stake in Tencent alone is worth $139.4 billion. And that's not to mention the other $20 billion or so of other assets Prosus owns.

The sale could also have ancillary benefits

It's possible that Naspers' sale of Prosus could be an attempt to increase Prosus' share price. You wouldn't think that selling shares may cause the price to go up, but there's a reason why it might. Prosus is under-weighted on European and international market index funds, because it's weighted based on its free-trading shares (not owned by Naspers), not the entire value of the company. By making more shares available, it may actually boost Prosus' weighting in these indexes.

There may also be a shortage of shares for other institutional investors. In the press release, Naspers claimed, "Naspers has seen significant interest in Prosus from new investors, in particular European institutions and global technology investors. The Placing will offer an opportunity to the broad investment community to get exposure to the largest listed European consumer internet stock by asset value and thereby continue to broaden Prosus´s shareholder base."

Thus, more availability for indexes and institutions could actually spur interest, hopefully closing more of the gap between Prosus and its net asset value. Obviously, it would be more beneficial for Naspers to sell Prosus shares at higher prices in the future.

Words of caution, but a huge discount remains

Of course, it's always a bit suspect when somebody is looking to sell an asset, and it's quite possible that Naspers' sale means management is uncertain about the impact of the coronavirus on China's economy. That could negatively impact Prosus' investment in Tencent and also Trip.com (TCOM 1.24%). It's probably not a coincidence that the January 22 sale came just as the coronavirus news was beginning to make headlines.

Naspers does have a pretty good track record of selling at high points. In early 2018, Naspers sold 6% of its stake in Tencent, just before the a video game ban in China and the global trade war tanked Tencent's stock. Tencent's stock still hasn't recovered to those levels as of yet. Therefore, Naspers management may feel that Prosus -- and maybe also Naspers stock itself, could be in for a rough ride, despite their already discounted shares.

Of course, since Naspers also intends to buy back its own stock, it also probably thinks that Naspers stock is a huge long-term value. I tend to agree, which is why Naspers remains my favorite international stock over the next decade, despite the near-term coronavirus fears.