But will the burger chain's big move in China and a Grubhub alliance pay off?

Big plans are afoot at Shake Shack (SHAK 2.97%) for the coming year, including a China expansion, new food offerings, and a pact with Grubhub (GRUB). At the 2020 ICR Conference in January, these plans got an eager endorsement from Wall Street as shares gained almost 10% in the week following the conference. But certain indicators sound a warning about whether the burger chain can actually deliver on its rosy promises.

Shake Shack used the ICR Conference to share its vision for the future. During the presentation, the company reported that it opened 49 more domestic restaurants (or Shacks) in 2019, bringing the number of U.S. outlets to 173. Global net additions came in at 28, including openings in Hong Kong, mainland China, Mexico, and the Philippines.

The company also highlighted the trajectory of its business from 2015 to 2019, including compound annual growth of 34% for revenue, 32% for system-wide sales, and 28% for cash flow from operations. 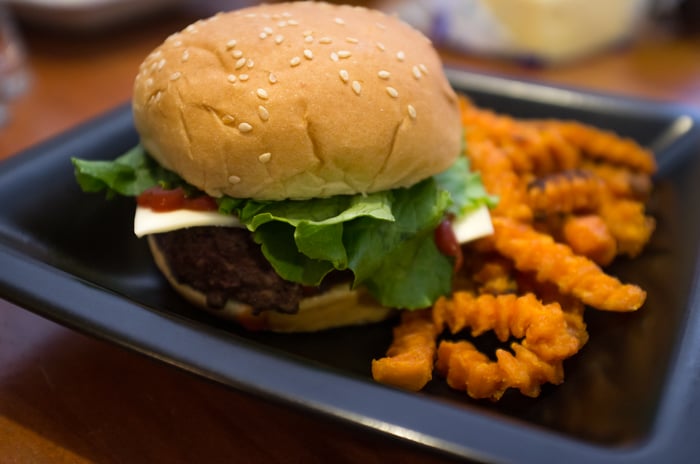 The company's 2020 strategic growth plan focuses on increased market penetration in the U.S. and in several important overseas markets, notably China and Korea. It's guiding for approximately 340 Shacks worldwide in 2020 and new menu items, including hot chicken and a veggie ShackBurger. Shake Shack also announced an exclusive partnership with Grubhub.

The company's presentation prompted Goldman Sachs to issue a spectacularly bullish recommendation, citing the Grubhub pact as the most important factor in Shake Shack's expected growth. The investment bank's one-year price target of $115 represents a 70% increase over current trading levels.

Is something rotten in the state of burgers?

While these forecasts appear to make Shake Shack an excellent choice for those investing in restaurant stocks, a closer examination reveals some red flags. For example, management stated during the presentation that Grubhub provided exclusive home delivery for 40% of Shake Shack's locations, and the burger chain intends to extend this exclusivity to all of its restaurants as part of the new deal. But Grubhub has been grappling with declining market share and profitability. As diners move to competing food delivery platforms like DoorDash, Shake Shack risks missing out on those potential orders.

And while veggie burgers and chicken tap into popular trends, neither seems likely to deliver the overwhelming growth needed to meet the more bullish ratings on the stock. The company's China strategy likewise focuses on major first-tier cities like Shanghai and Beijing, while KFC, now the largest restaurant chain in the country, expanded vigorously in second and third-tier cities where lower overhead and less competition created an opportunity. Last September, CEO Randy Garutti noted that the company plans to open 15 Shacks in Beijing over the next decade, so it will be some time before that market becomes material to the company's results.

Investors who have followed Shake Shack since its IPO in 2015 know that valuation has always been a concern. Its price-to-book ratio of eight is far higher than the typical threshold for stocks performing well at appropriate value (often considered to be three, while a stock trading at book value or lower is considered undervalued). Its price-to-earnings multiple of 85 far exceeds the broader restaurant industry's P/E of 26.

A filing with the Securities and Exchange Commission provides one additional piece of data that some investors might find concerning. Beginning on Jan. 13, the day before Shake Shack's appearance at ICR, company director Jonathan D. Sokoloff began reducing his holdings of Shake Shack. In all, Sokoloff disposed of 784,299 shares, or approximately 70% of his total position.

While Shake Shack's presentation and the bullish calls made by some analysts paint a picture of a stock set to skyrocket in 2020, investors should remain cautious. Current shareholders must closely follow the results of the exclusive Grubhub partnership and the chain's expansion to new markets, both within the U.S. and abroad.

But given the uncertainty surrounding these major growth initiatives, investors are better off staying on the sidelines.