Please ensure Javascript is enabled for purposes of website accessibility
Log In Help Join The Motley Fool
Free Article Join Over 1 Million Premium Members And Get More In-Depth Stock Guidance and Research
By George Budwell - Feb 3, 2020 at 11:30AM

Only one of these pot stocks is a strong buy right now.

Ever since the end of the first quarter of 2019, pot stocks have been in a downward spiral. Underwhelming earnings, several scandals, managerial turnover, Health Canada's slow approval process for both physical retail outlets and key derivative products like vapes, enormous tax rates, the existence of a thriving black market, and of course, financing issues have all weighed on valuations across the space over the prior 10 months. This steep market correction, though, may represent a once-in-a-lifetime buying opportunity for patient investors. After all, legal cannabis is still expected to be one of the fastest growing industries in the world during the current decade, despite these early headwinds.

Which pot stocks represent the best bargains in the wake of this prolonged downturn? Within the realm of elite licensed producers, Canada's Canopy Growth Corp. (CGC 4.76%) and Aphria (APHA) could both come to own an outsized share of the global cannabis market by the end of the decade. So, with this brief background in mind, let's check out how these two pot stocks stack up on several fronts to decipher which one is the hands-down better buy right now. 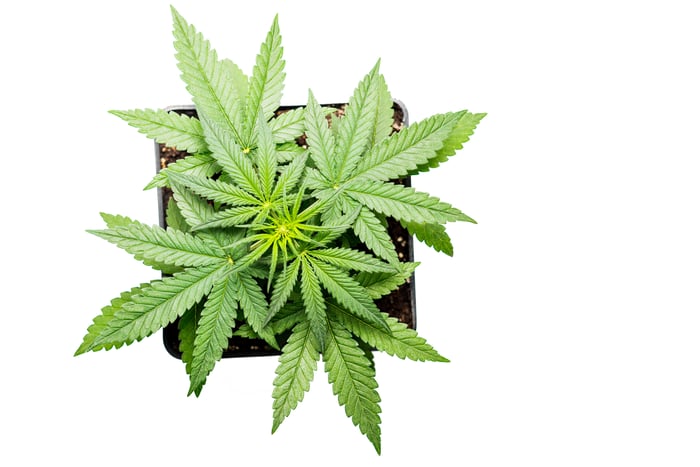 Canopy is the industry's 800-pound gorilla. With a market cap of $7.8 billion, this Ontario-based grower is the largest marijuana company in the world by market capitalization, as well as the only cannabis business anywhere close to large-cap status right now. Canopy's enormous girth is largely the byproduct of its close partnership with alcohol beverage giant Constellation Brands. Constellation's sizable equity stake has enabled Canopy to expand internationally, beef up its product portfolio, and prepare for the eventual legalization of cannabis at the federal level in the United States.

Canopy currently has a buyout agreement in place with the top-shelf multi-state operator Acreage Holdings. Upon closing, this deal would make Canopy one of the biggest players in the all-important U.S. cannabis market. The only downside is that this buyout agreement won't go into effect until the U.S. officially ends federal prohibition on cannabis -- a seminal event that may not occur for a upwards of a decade, or perhaps even longer.

Canopy's size cuts both ways, however. The long and short of it is that Canopy's empire-building efforts have basically turned into a boondoggle in the past year, thanks to the ongoing structural problems with the Canadian legal cannabis market, as well as the slow pace of legalization globally. Keeping with this theme, Wall Street doesn't expect Canopy to turn a profit on a recurring basis until at least 2023. Some analysts even think the company won't become profitable until 2024. Meanwhile, Canopy's hefty cash burn rate is set to become a major problem. The company's new CEO David Klein must reign in spending and cut costs as soon as possible; otherwise the pot titan could run out of cash before it ever turns into a profitable operation.

Aphria's investing thesis boils down to three issues. First, Aphria has a top-tier production capacity of 255,000 kilograms (more than 56,000 pounds) of cannabis per year. That makes Aphria Canada's third-largest producer on paper. In reality, though, it might actually be the country's second-largest cannabis cultivator.

Second, the company's German subsidiary CC Pharma has helped it to rapidly achieve profitability. That's a rare feat in the industry these days.

Finally, Aphria sports one of the longest cash runways, following a $76 million strategic investment from an unnamed institutional investor last week. Aphria, in fact, probably has a longer cash runway than even Canopy at this point, although some much-needed belt tightening at Canopy could quickly change this situation.

Aside from Aphria's core value-creation pillars, the company also owns one of the highest-rated premium dried leaf brands in Broken Coast, and its international footprint spans well beyond Germany. Aphria appears to be well-positioned to capitalize on the slow but steady growth of the global cannabis market.

The biggest knock against Aphria is the company's balance sheet. Aphria's serial acquisition phase, which occurred under the prior management team, has caused its goodwill to skyrocket. As such, it's a near certainty that Aphria will end up taking multiple goodwill impairment charges over the coming quarters to rectify this accounting issue.

Which pot stock is the better buy?

All things considered, Aphria's stock is the better buy right now. Aphria likely has a major cash runway advantage, it's already profitable on a recurring basis, and its stock sports a far more reasonable valuation. Aphria's shares are presently trading at around three times 2021 estimated sales. Canopy's stock, by contrast, is trading at an astronomical 14.5 times 2021 projected revenue.

That's a staggering valuation gap, to put it mildly -- one that doesn't seem to be justified based on the current state of the fledgling cannabis industry. In other words, Canopy's inherent competitive advantages over the broader field have largely been rendered moot by the industry's extremely slow maturation rate.

As a result, investors are probably better off going with a pot stock like Aphria, which sports a valuation that's essentially in line with prevailing market conditions. Canopy, after all, is clearly trading on the enormous promise of what the industry might evolve into over an undetermined period of time. That's not a sound investing strategy.