Please ensure Javascript is enabled for purposes of website accessibility
Log In Help Join The Motley Fool
Free Article Join Over 1 Million Premium Members And Get More In-Depth Stock Guidance and Research
By Alison Healey – Feb 4, 2020 at 9:47AM

New geothermal power requirements in California may set the stage for Ormat to line up new business based on its experience in the market.

California regulators working on the state's path to 100% clean energy are considering a proposal to double the use of geothermal power by 2030.

Ormat Technologies (ORA -1.68%) has been operating assets in the state for decades and has extensive experience with geothermal power, so the proposed new regulations could represent an opportunity for the company to increase its backlog of projects. 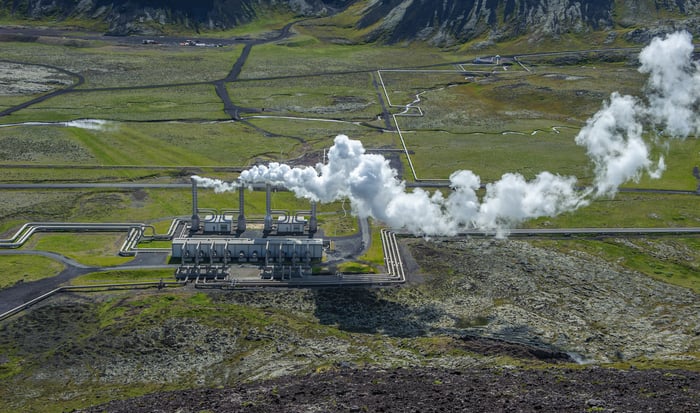 Why is geothermal power demand increasing?

Geothermal energy is derived from the heat of the earth. It can be used as a source of renewable electricity and for heating and cooling applications, so it has a versatility that sets it apart from other renewable power sources. The projects have exceptionally long operating lives and can be used as baseload sources of power, meaning they are always producing, unlike renewables that depend on the wind to blow or the sun to shine. Despite all their positive attributes, however, the projects are limited to certain regions and can take longer to build than wind and solar. There are also fewer companies experienced in building the projects, and cost to build the projects has tended to be higher than other renewables.

But demand has been increasing recently, due in part to the California bill that was passed requiring the state to get to 100% renewable energy by 2045. Like wind power and certain other renewable technologies, the projects also remain eligible for federal tax credits under an extension passed at the end of 2019 which ultimately brings down construction costs.

Activity has already started to pick up, demonstrated by two new contracts signed in the past month that show Ormat's projects can appeal to a new type of buyer. In January Ormat signed power purchase agreements with Silicon Valley Clean Energy and Monterey Bay Community Power for a total of 14 MW from its 30 MW Casa Diablo-IV geothermal project in Mammoth Lakes, California.

The plant is expected to be running by the end of 2021 and will be the first geothermal project built within the California Independent System Operator (CAISO) market in the last 30 years. It will also be the first plant in Ormat's portfolio that will sell its power to a community choice aggregator, which is a program that allows local governments to buy power on behalf of residents from an alternative supplier while still receiving transmission services from the traditional utility.

What will the trend do for Ormat?

Ormat has been active in geothermal operations in more than 25 countries, but it targets the US heavily for future expansion. The company said in a Q3 presentation that it sees an opportunity for 3.6 GW of geothermal growth in the US.

The company has been focused on growing its geothermal portfolio since the 1980s and offers different services and products to the industry, from providing the equipment to delivering whole projects. The company has more than 900 MW of operating geothermal plants and plans to add between 120 MW and 135 MW by the end of 2021. It is also in the midst of repowering some of its projects, like the Heber 1 and 2 plants in California. The process will enable the plants to run more efficiently and will increase production capacity, which should make it possible for Ormat to sign new contracts based on demand from mandated green initiatives in California and elsewhere. When the company enters a contract, it typically contributes revenue over the long term, since the average weighted life of a power purchase agreement in the company's portfolio is 18 years.

Ormat also has plans to expand into energy storage, and projects that include a storage component could be even more sought-after, particularly in California where utilities are also mandated to source a portion of their electricity from storage. 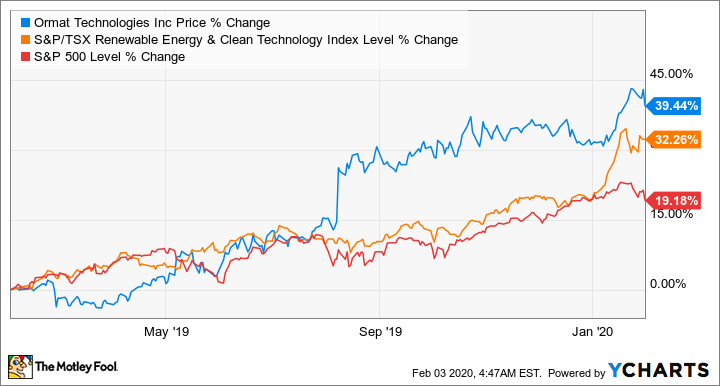 Ormat has outperformed the S&P 500 by more than 40 percentage points over the past year and has seen revenue consistently grow on a year-over-year basis over that time frame. Renewed interest in geothermal power should only help this trend continue, and the company's strategy of putting contracts in place before projects are even built can help de-risk its growth plans. Investors would be wise to keep an eye on geothermal mandates and follow the moves Ormat makes in response. Because of the company's focus on geothermal power rather than the more common solar and wind projects, Ormat can offer some diversity for an investor who already holds some renewable energy stocks.