The exercise-bike company may have just earned a key win for its services business.

Peloton Interactive (PTON -7.27%) scored what looks like a significant intellectual property victory on Tuesday. Rival exercise bike and fitness center company Flywheel has agreed to no longer use the "leaderboard" performance-tracking technology that Peloton holds is protected by patents.

Peloton filed a suit in 2018 alleging that Flywheel had infringed on key intellectual property used in its at-home fitness cycles. Peloton's software and in-cycle display allow users to track performance in exercise programs against personal records and performance from other users. Following the recent settlement, Flywheel will remove the feature from its exercise bikes, according to The Wall Street Journal. 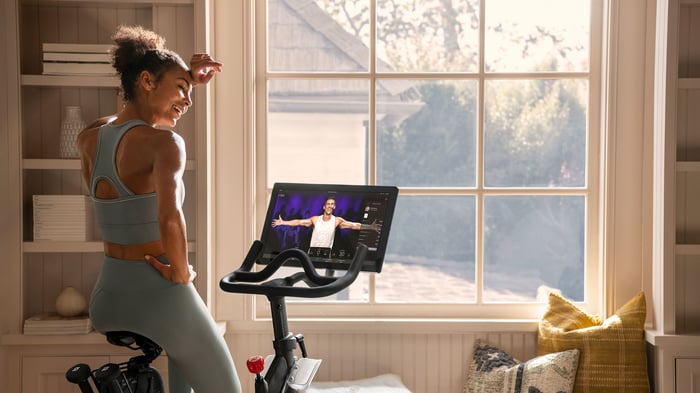 What it means for Peloton

Flywheel conceded that Peloton's patents on exercise-cycle leaderboard technology are enforceable. Flywheel also affirmed that it had infringed on elements of Peloton's patents and that it will no longer include the related feature in its own equipment. No details on financial concessions from the suit have been disclosed.

Peloton has been a controversial stock in recent months, and the company is under pressure to justify its valuation amid mounting losses. Shares trade at roughly 6.3 times this year's expected sales and 4.3 times next year's target. Swinging into profitability will likely hinge on the service component built on top of the company's hardware business, and a competitor acknowledging that Peloton has proprietary technology in the category is an encouraging sign.

The core bullish thesis on Peloton depends on the idea that the company can supplement its exercise hardware business with a subscription-service component that creates a recurring revenue stream and elevates margins. Securing a settlement from Flywheel seemingly bodes well for the thesis that Peloton has defensible intellectual property that could help create a lasting foundation for its services business.