Please ensure Javascript is enabled for purposes of website accessibility
Log In Help Join The Motley Fool
Free Article Join Over 1 Million Premium Members And Get More In-Depth Stock Guidance and Research
By David Jagielski - Feb 4, 2020 at 6:00AM

Higher prices are only going to make black-market products all the more appealing.

Marijuana prices need to be low enough to keep consumers away from the black market. However, for regulators, there's also a need to generate sufficient tax revenue from the industry so legalization can achieve various funding goals that different states envisioned when they decided to legalize pot. Finding a balance has been difficult, but few would argue that taxes are low enough for the industry to succeed.

Some customers in Illinois pay more than 40% in tax

Depending on where in the country you live, the amount of taxes that you pay on a cannabis purchase varies significantly. Customers in Anchorage, Alaska only pay up to 5% between state and local taxes, although pot there is still among the most expensive in the country. In Illinois, where pot was recently legalized, taxes can soar to more than 40%. What's surprising is that it's still not the most taxed cannabis state. That honor belongs to Washington, where state and local taxes on cannabis in Seattle can reach 47%. 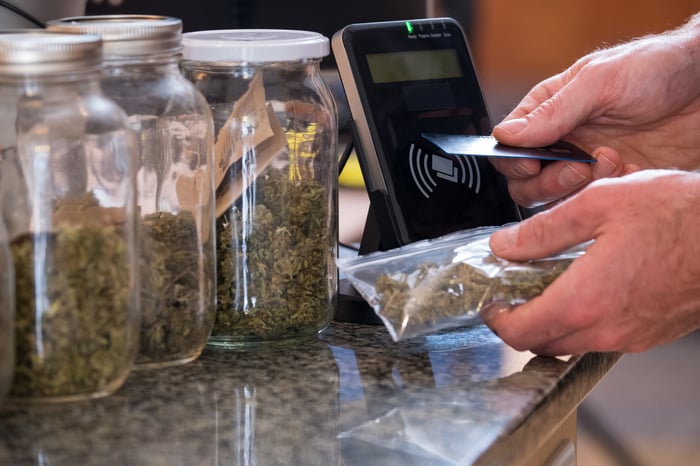 This, of course, is without the federal government imposing any taxes of its own on cannabis, since pot is not legal federally. If legalization were to happen, it would open up more growth opportunities for the industry, but it could also make pot even more expensive. Despite the taxes, however, demand still remains strong. In Illinois, the state generated $11 million in legal pot sales during the first week pot shops were open.

However, in California, which has a more modest tax rate at around 22% to 25%, the black market still holds a decisive edge in market share. One projection has illicit sales making up more than two-thirds of the state's total market in 2019 and that it won't be until 2024 that the legal market gets the edge.

Are states expecting too much?

Higher tax rates mean that states can generate more in revenue from cannabis. The problem is that their expectations can quickly become too optimistic. Gov. J.B. Pritzker of Illinois argues that the state will benefit from tourists coming from other states to purchase pot, and that "It gives us a chance to collect tax revenue from the residents of Wisconsin, Missouri, Iowa and Indiana."

While Illinois will likely see out-of-state cannabis customers, the problem is that as more states legalize pot, its advantage will lessen as consumers have more options. And states with higher legal pot prices may not only lose sales to the black market, but also to neighboring states selling more competitively priced cannabis. Finding an equilibrium that works well for the government and consumers will likely take years to sort out. Keeping taxes down is crucial in an industry where prices are already very volatile.

Colorado tracks the average market rate (AMR) per pound of flower that cannabis producers are charging wholesalers. On Apr. 1, 2019, the AMR was $806, less than half the $1,876 it was on Jan. 1, 2014 when the recreational pot market was first legal in Colorado. That kind of volatility can wreak havoc on expectations, which, in turn, could affect the taxes regulators decide to impose on cannabis as well.

For an Illinois-based company like Cresco Labs (CRLBF 1.09%) that's banking on a strong pot market in its home state, a high tax rate could hurt its potential growth. While there's no denying that the hype remains strong and cannabis is still new and exciting, the real test will be if consumers come back and keep purchasing from the legal market. That leaves companies like Cresco Labs at the mercy of regulators as high tax rates will make it challenging to set and meet forecasts for future growth.

When choosing a marijuana stock to invest in, investors should consider which key markets will be crucial to the company's growth, and evaluate the tax rates there and how well the pot market is likely to grow in those areas. If a state's growth prospects are concerning, then that's likely going to be problematic for any cannabis operators in the state as well. And underperforming sales numbers can send a pot stock crashing in a hurry.