After another lackluster year, the high-end jeweler's investors vote to join forces with a proven player.

As was largely expected, shareholders of luxury brand Tiffany & Co. (TIF) agreed to an amicable acquisition of the company by bigger rival LVMH (LVMHF 1.00%) (LVMUY 1.33%), which owns high-end brands like fashion label Louis Vuitton, Dior perfumes, Moet & Chandon wines, and others. The addition of Tiffany to the LVMH family will primarily bolster its jewelry business, though Tiffany & Co. also offers accessories, perfumes, and some items for the home. 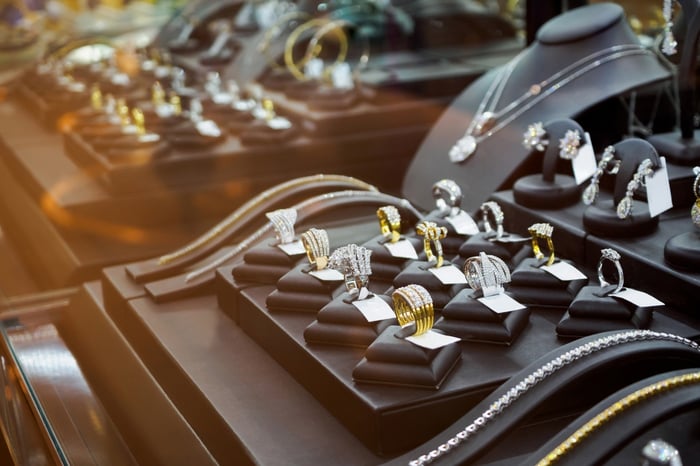 News of a potential deal surfaced in October of last year, when LVMH confirmed it was in negotiations with Tiffany. LVMH announced an official offer in November, valuing Tiffany & Co. at $16.2 billion, or around $135 per share. A small number of Tiffany investors sought to block the acquisition, claiming documents filed with the SEC in mid-December didn't include adequate information about the merger, including financial projections. Most shareholders are seemingly unconcerned about that paperwork, however, with LVMH reporting on Tuesday that Tiffany shareholders "voted overwhelmingly to approve" the union.

The buyout could reasonably be regarded as a graceful exit from a difficult situation. Though the Tiffany name is still well-respected, that cachet has not translated into meaningful sales or earnings growth. Aside from the impact of a tariff war that has crimped tourism to locations where many Tiffany & Co. stores are located, younger consumers are increasingly disinterested in luxury goods just for the sake of luxury. Last year's top line of $4.44 billion matched 2018's total sales. That's in contrast with LVMH, which broke its own record again last year by driving revenue of $60 billion, up 15% year over year.