Please ensure Javascript is enabled for purposes of website accessibility
Log In Help Join The Motley Fool
Free Article Join Over 1 Million Premium Members And Get More In-Depth Stock Guidance and Research
By John Bromels - Feb 4, 2020 at 10:43AM

The top oil and gas refiner underperformed... just like everyone else.

By the time Valero Energy (VLO 0.80%) reported fourth-quarter 2019 earnings on Jan. 30, everybody was already aware that the refining sector of the oil and gas industry had had a rough season. So the stock market largely shrugged off Valero's slight year-over-year declines in revenue and adjusted earnings.

In spite of that, there were some bright spots in the report, not least that even the adjusted figures beat analysts' consensus by a lot. Here's what investors need to know. 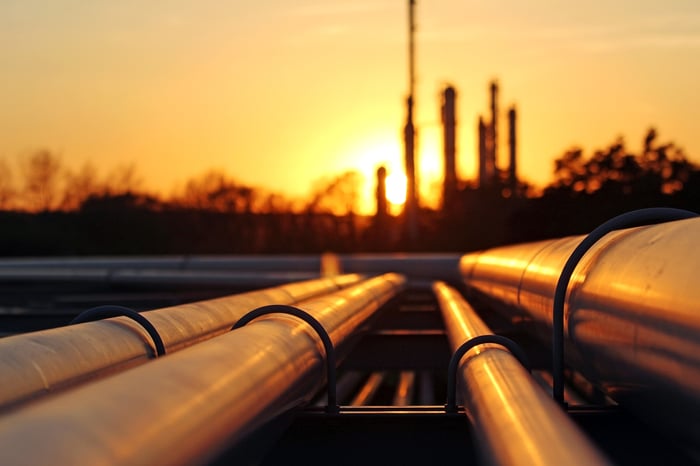 The difference between the earnings under generally accepted accounting principles (GAAP), which show double-digit percentage gains over Q4 2018, and the adjusted figures, which show slight declines, is significant. Both figures handily beat analysts' consensus estimates of $1.60 per share. The adjustments that made such a difference were due to a retroactive blender's tax credit in the company's renewable diesel segment that was recorded in Q4 2019.

However, although net income dropped in the company's biggest segment, refining, its ethanol segment saw a net profit instead of a loss, thanks largely to higher ethanol prices. Even after the blender's tax credit adjustment, renewable diesel net income also notched a 12% year-over-year gain. However, those two segments have very little impact on the overall company's bottom line: 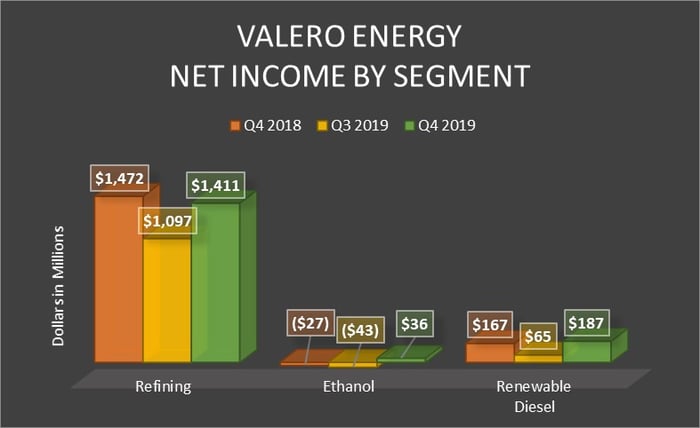 While it's good to see the two smaller segments outperforming, the company's refining operations are what makes or breaks its bottom line. And in Q4 2019, refining margins were down across the industry.

On the Q4 2019 earnings call, CEO Joe Gorder was frank about the industrywide issues the company faced during the quarter:

Overall, 2019 was a challenging environment for the refining business. We started the year with gasoline inventories at record highs and gasoline cracks at historic lows. We were also faced with narrow sour crude oil differentials for most of the year, primarily due to sanctions on Venezuela and Iran in addition to OPEC and Canadian crude oil production curtailments and differentials on inland sweet crude oils narrowed in the second half of the year with the start up of multiple new crude pipelines from the Permian Basin to the Gulf Coast.

Despite this challenging backdrop, our team demonstrated the strength of our assets and prior investments to improve our feedstock and product flexibility, allowing us to deliver another year of steady earnings and free cash flow. We demonstrated our crude supply flexibility by processing an annual record of 1.4 million barrels per day of North American sweet crude oil as well as a record of approximately 180,000 barrels per day of Canadian heavy crude oil in 2019. ... We also continue to explore growth opportunities in our renewable fuels business, which is already the largest in North America.

In the third quarter, when Valero outperformed expectations, its share price jumped. This quarter, it did the same, but shares barely budged. With so much volatility in the energy sector right now, it's tough to know what will happen in the first quarter of 2020.

Valero is hoping to grow its Diamond Green Diesel joint venture with Darling Ingredients, but it's going to take time to ramp up that side of the business. Similarly, the company's ethanol arm is too small to have a significant impact on performance. That leaves Valero as primarily a crude oil refiner, subject to the whims of the refining market. In Q4, that market wasn't particularly good for refiners. It may improve in Q1, as oil prices have dropped, which can increase refining margins.

Valero's valuation has also dropped since Q3, and shares are now trading at about 13.7 times earnings. That's still on the high side of its historic levels, but investors interested in biofuels will probably want to keep an eye on Valero.