Drugstore chains and others have had mixed results on this front, but the retailer giant already has the scale others couldn't create.

Last week, mega-retailer Walmart (WMT -6.79%) tiptoed deeper into mostly uncharted healthcare waters by opening its second primary care facility called Walmart Health. The new location in Calhoun, Georgia, will be staffed with healthcare providers offering everything from walk-in and clinical care to x-rays and dental services, mirroring a similar center it opened in September in Dallas, Georgia. The company said the facility will provide "affordable, transparent pricing regardless of a patient’s insurance status."

Were it just one such location, the facility could simply be categorized as a pet project; many companies maintain small business units for experimental purposes. It's not just one though, and it's not just Walmart moving deeper into primary care. Insurer Humana (HUM -4.66%) is undertaking a joint venture with a private equity firm to develop more primary care centers aimed at serving older Americans. Walgreens Boots Alliance's (WBA -8.39%) primary care partner VillageMD announced a deal last week to acquire almost 50 different medical practices in Arizona.

Primary care is shaping up as the healthcare industry's next major battleground in a war against burgeoning costs. It's a contest Walmart may be better prepared to fight than it gets credit for.

The sleeping giant has awoken

It's not the first time investors have seen maneuvers meant to curtail growing health costs. Pharmacy benefits managers became critical to insurers and pharmacies as a means of pushing back against rising drug prices. Insurers are even collaborating with pharmacies, with CVS Health (CVS -5.39%) acquiring Aetna last year to cut out at least one middleman and bolster frontline care services. Both Walgreens and CVS continue to tinker with in-store care as well, although Walgreens punted to third-party partners last year after being unable to make home-grown clinics profitable. 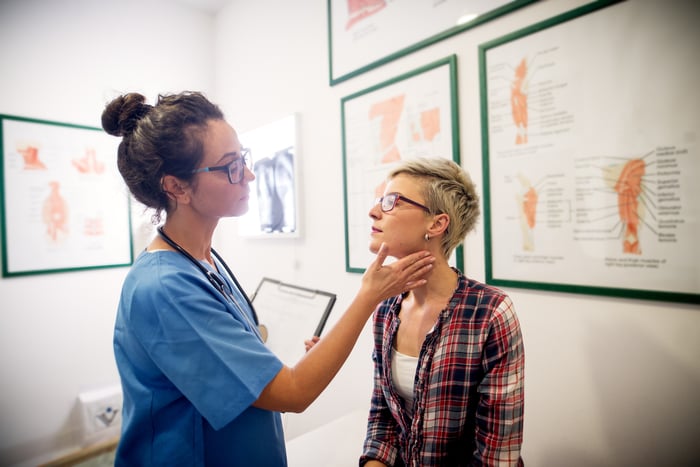 Walmart's foray into the arena, however, is the first case where such an unlikely newcomer has been willing to take a chance on moving to the front line where consumers await.

It won't likely stop here either, according to Morgan Stanley analyst Simeon Gutman. Following the ribbon-cutting of Walmart's Dallas-based clinic, he wrote, "From this starting point, we think expansion into stand-alone health clinics offering an array of services makes sense and should not be surprising." The advent of the second clinic underscores his expectation.

More important, Walmart's march into the thick of what's happening on the front lines should concern shareholders of other names in the primary care business like One Medical which is readying its IPO. Dr. Lisa Bielamowicz, co-founder of consulting firm Gist Healthcare, said, "Walmart is a sleeping giant, and they're putting together all the pieces to be able to move big in healthcare when they want to."

Only time will determine to what extent Bielamowicz's stance is on target, but it's not unreasonable for investors to put this latest evolution of the healthcare industry on their radar. It's also not impossible to begin handicapping the stocks that may thrive on or be challenged by the shift.

Humana and Walgreens clearly have an edge -- and a lead -- on Walmart. The health insurer has been in the primary care business before, and still is, even if its frontline clinics are largely meant to funnel older consumers into its Medicare Advantage plans. These facilities offer services to non-Humana customers. Meanwhile, Walgreens also still operates more than 200 partner-run clinics, even after announcing in October it would shutter about 150 of its wholly owned primary care centers. The drugstore chain really is going to take the partnership route for the foreseeable future after losing money for too long on home-grown clinics, a reality that should give Walmart pause as it proceeds. This business is hard, and growing into it is even harder.

Walmart does enjoy one massive edge, though. That is, it's already got a footprint of more than 5,000 U.S. stores, and room next to each to build a stand-alone clinic that could benefit from its existing foot traffic. The retailer boasts that 140 million U.S. shoppers visit one of its stores at least once per week. It's accessible to sick people solely because it's accessible to almost everyone.

The world's biggest retailer also has the financial wherewithal to make stand-alone healthcare centers complete enough to compete with any rival. Both of the facilities erected so far are equipped with x-ray machines and diagnostic equipment and they also offer mental health and vision services. They seem more like hospitals than not, able to offer services not always available at a walk-in or urgent care clinic.

The shape of things to come

It all sets the stage for achieving the profitable scale that Walgreens couldn't. Sean Slovenski, Walmart's president of health and wellness, said, "We see these as being a crown jewel of what we want to accomplish in the physical world, in the home, and in the virtual world as well," tacitly confirming it has greater ambitions than just its two facilities. Slovenski went on to say the company's healthcare initiative was being built to replicate the process the retailer used to become one of the world's biggest retailers -- lowering costs by expanding its size. As an example, he points out, the organization could reduce prices on lab tests and dental cleanings between 30% and 50% simply by cutting out middlemen.

Ultimately at stake is a bigger piece of the U.S.' $3.5 trillion healthcare market and this endeavor by Walmart makes it suddenly seem much more attainable.