A future blockbuster scores another success as AbbVie works to replace Humira losses.

AbbVie (ABBV 1.50%) reported that its new immunology drug Rinvoq (upadacitinib) successfully met primary and secondary endpoints in a registrational trial for treatment of psoriatic arthritis, clearing the way for the company to file a new drug application (NDA) for the indication later this year.

In the study of 1,705 adults who had previously been treated unsuccessfully with non-biologic arthritis drugs, 79% of the group taking the highest of two tested doses of Rinvoq had at least a 20% improvement in disease symptoms after 12 weeks compared with 36% of the placebo group. After 16 weeks, 62% of the group achieved a 75% improvement in skin symptoms, compared with 21% of the patients on a placebo. And at the 24-week mark, 45% of the high-dose group achieved minimal disease activity, the goal in treating arthritis, versus 12% in the placebo group. 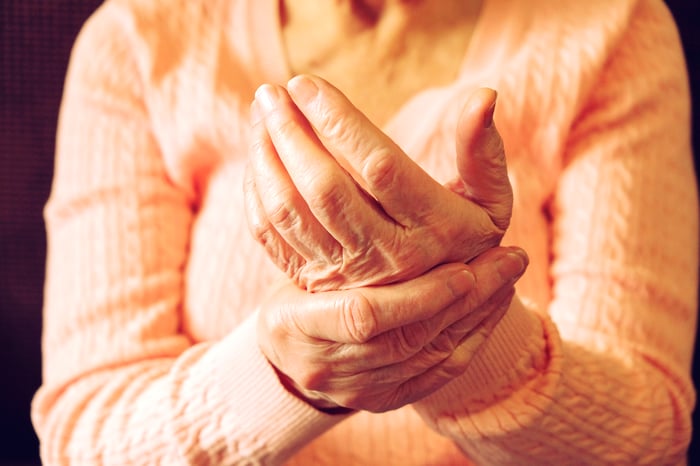 The trial also compared Rinvoq to AbbVie's Humira, the world's top-selling drug that's under threat from biosimilars, and those results may not be as conclusive as the company was hoping. Rinvoq was superior to Humira in producing a 20% symptom improvement after 12 weeks only at the higher dose and was shown only to be non-inferior at the lower dose. The company didn't release comparative results for Humira on the other efficacy measures.

The study confirmed results from an earlier, smaller study that read out in October, and AbbVie said in the last conference call that positive results from this trial would lead to regulatory submission in mid-2020 and commercialization in 2021. Rinvoq is already approved in the U.S. for rheumatoid arthritis and the company has the drug in trials for six other diseases.