Shares of pharma giant AbbVie (NYSE:ABBV) dipped by 3.96% over the course of 2019, according to data from S&P Global Market Intelligence. The drugmaker's stock slipped last year for two fundamental reasons:

Prior to 2019, AbbVie's shares had appreciated by a whopping 163% since the company's debut as an independent entity in 2013, making it one of the best-performing large-cap pharma stocks over this period. The company's early success, however, was due in large part to Humira's skyrocketing sales. 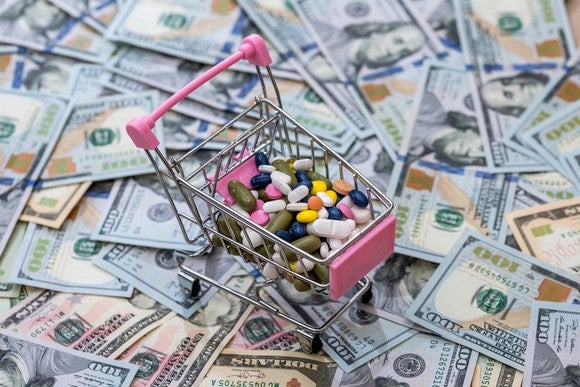 Unfortunately, AbbVie wasn't able to significantly diversify its revenue stream ahead of Humira's date with the patent cliff -- despite the company's ultra-aggressive approach to business development. So, given that Humira has consistently made up around 60% of the company's annual sales, it's not altogether surprising that investors shied away from this biopharma stock last year.

The good news is that this Allergan tie-up will immediately dilute Humira's overall importance as a source of top-line growth. Moreover, AbbVie also got the green light from the Food and Drug Administration for two new immunology meds -- Skyrizi and Rinvoq -- last year. These two drugs are widely expected to become blockbuster-level products in short order, which should help the company smoothly transition into the next stage of its life cycle.