Please ensure Javascript is enabled for purposes of website accessibility
Log In Help Join The Motley Fool
Free Article Join Over 1 Million Premium Members And Get More In-Depth Stock Guidance and Research
By Anne Burdakin - Updated Apr 16, 2020 at 8:26AM

Is it possible to have both growth and safety in this market?

Recent market volatility has unfairly whipsawed many stocks that are usually considered steady eddies, and the effects have been even stronger for specific sectors and speculative stocks. That said, some stocks were wildly overvalued when the market was hitting new highs not so long ago, and were ready for a correction.

Pharmaceutical maker AbbVie (ABBV 0.40%) has been caught in the downdraft, down 7% since the beginning of the year. The company pays a juicy 5.9% dividend. Which category does AbbVie fall into, and is the dividend safe?

When Humira and Botox got married

Spun off from Abbott Laboratories (ABT 0.09%) in 2013, AbbVie has grown annual revenue from $18.8 billion that year to $33.3 billion in 2019. The multipurpose drug Humira has been the main engine behind this growth; in fact, it's now the top-selling drug in the world.

Humira is a pretty big blockbuster, and the reason is its ability to block the body's inflammatory process. Like mutinous pirates, autoimmune disease causes your body's immune system to attack your own healthy cells by mistake. Any part of your body can be mistakenly attacked, resulting in conditions like lupus, Crohn's disease, rheumatoid arthritis, chronic plaque psoriasis, and other illnesses. Humira's versatility comes from its ability to block that inflammatory process, a central mechanism in autoimmune disease. 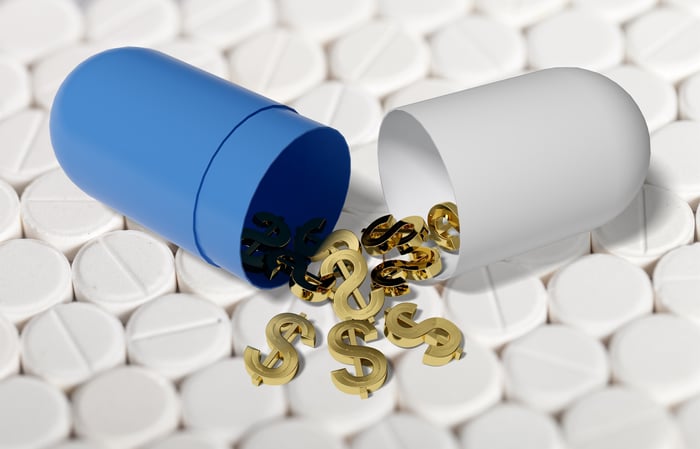 But AbbVie has more going for it. In 2019, a deal was struck for AbbVie to acquire Allergan (AGN), expanding the reach and scope of the company. The new AbbVie is expected to generate 40% of revenue from Humira and 60% from growth opportunities made possible by the integration of the two companies. The deal is expected to close in May.

You look at [the drugs] Skyrizi, Rinvoq, Venclexta, Imbruvica. Those all have significant growth opportunities ahead of them on the AbbVie side. And then you look at the Allergan side, you have Vraylar. This is a product that is about an $850 million product. I think the last numbers I saw showed it was growing about 70%.

Allergan also has a big presence in the growing aesthetics sector thanks to its ownership of Botox and CoolSculpting. Such elective procedures are being canceled or postponed during the coronavirus crisis, but the aesthetics sector should bounce back after the pandemic has passed.

Guidance for 2020 reflects growth of 8.1% at the midpoint, with an EPS forecast between $9.61 and $9.71. Management expects to see revenue growth for 2020 approaching 8% on an operational basis. AbbVie will issue 2020 pro forma guidance following the close of the planned Allergan acquisition.

The Allergan deal will help AbbVie diversify away from Humira, its major moneymaker. It already faces biosimilar competition in Europe, and will lose U.S. patent protection in 2023. In the U.S., Humira is still growing, but in Europe, sales are dropping as cheaper options become available.

AbbVie's management expects several financial benefits from the merger, including an immediate 10% increase to earnings per share over the first full year of the combination, cost reductions of at least $2 billion by year three, and operating cash flow estimated at $19 billion.

Regarding dividend safety, AbbVie said in a company announcement regarding the Allergan acquisition: "The combined company will produce robust cash flow which will support continued growth of our dividend, further investment in our pipeline, and reduction of debt. We intend to reduce debt levels by [$15 billion to] $18 billion by the end of 2021, with further deleveraging through 2023."

AbbVie has done well to position itself for the future, and the stock price should remain relatively strong through the coronavirus crisis, especially considering its price-to-earnings ratio of 15.1 versus the industry average P/E of 29.7. AbbVie looks like a safe stock to own.

A lot is riding on the finalization of the Allergan deal, but the likelihood of its going through is high at this point because all requirements have been met.

I think the dividend is safe for the short term even without the Allergan deal, but its conclusion will secure the payout for the long run. In fact, I think AbbVie is a buy at these levels, with an upside expected shortly after the Allergan deal closes. This is a very synergistic combination. I think Abbvie will deliver very nice returns for investors.