Please ensure Javascript is enabled for purposes of website accessibility
Log In Help Join The Motley Fool
Free Article Join Over 1 Million Premium Members And Get More In-Depth Stock Guidance and Research
By Luis Sanchez CFA - Feb 5, 2020 at 8:48AM

Take-Two Interactive (TTWO 7.22%) is a major video game publisher known for its popular game franchises, including the Grand Theft Auto and Red Dead series. The lifeblood of any entertainment content business is the pipeline of future releases that can spark consumer interest and generate sales, and with years of success already behind it, Take-Two still has a solid lineup of future games coming.

Take-Two Interactive is best known for its incredibly successful Grand Theft Auto series -- by some metrics, the most financially successful entertainment franchise of all time. The most recent release, Grand Theft Auto V, has sold over 115 million units worldwide at around $60 per unit, equaling nearly $7 billion in gross revenue.

A new Grand Theft Auto game has the potential to be a big financial windfall for Take-Two. The last version of the game was released in 2013, and while Take-Two has extended its lifespan with online play, an update to the franchise seems overdue. However, the company hasn't officially announced a new Grand Theft Auto release; therefore, late 2020 or 2021 is the earliest one could expect a new game. That hasn't stopped fans and game industry publications from speculating!

Why has Take-Two taken so long to follow up? Rockstar, the studio responsible for creating the game, has a reputation of prioritizing quality over quantity. The company has also been able to sell downloadable expansions to the last game that have continued to generate hundreds of millions of dollars each year since the original release. 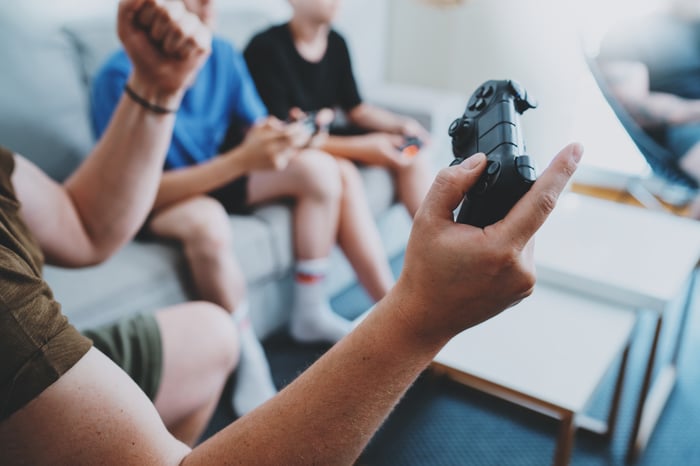 Take-Two has a larger stable of games beyond Grand Theft Auto. In fact, the company owns 11 game franchises that have each sold over 5 million units with a single game release.

Two games investors can expect every year are the latest 2K NBA and WWE games, which are updated with the latest athletes and team rosters. Both games have historically been quite popular and sell millions of copies each year. NBA 2K20 was the most successful release in the franchise's history, selling nearly 6 million copies.

Other highly anticipated titles expected within the next couple of years include new sequels to politically charged first-person shooter Bioshock, educational rocket simulator Kerbal Space Program, and alien-fighting strategy game XCOM. Each of these games has a high probability of success, since they're follow-ups to successful games with built-in audiences.

Take-Two Interactive could also surprise the market by releasing a new game (not a sequel) that sells millions of copies. The company employs some of the best game developers in the world and has mostly built its library of game intellectual property through organic investment in new games.

One interesting initiative is the company's Private Division, an effort to identify and distribute the best games produced by independent studios. Take-Two has strong marketing and distribution capabilities and can take an independent video game studio to the next level while allowing it to remain on its own. This is an interesting and increasingly common twist to the video game business model.

A push into mobile

While Take-Two is primarily known as a "hardcore" game developer for PC and console platforms, the company has recognized the opportunity in the market for mobile games. That's why it acquired mobile game studio Social Point in 2017 for $250 million.

Social Point has developed popular mobile games, including Dragon City and Monster Legends. Take-Two is investing more resources into the studio to increase its output. On a recent earnings call, the company noted that Social Point has 10 games in development. While mobile games have a high failure rate, hit games can still do extremely well for a publisher.

Now that Take-Two has upgraded its mobile game development capabilities, it opens the door to the idea of adapting the company's popular titles such as Grand Theft Auto to the mobile format in a more ambitious way. Activision Blizzard's recent success with Call of Duty: Mobile shows that big-budget console games can work well in the small screen format.

One knock that Take-Two Interactive seems to get is that it doesn't release enough games. The counter-argument is that when the company does release games, they are almost always exceptional. For example, Rockstar has released five Grand Theft Auto games since 2001; the lowest score of those games is 94 out of 100, according to Metacritic.

To counter this slow development cycle, Take-Two has invested more resources in game development and has expanded its game universe with new intellectual property each year. The company aims to deliver a couple of strong new games each year to smooth out its financial results, but it has pledged not to sacrifice on quality to get there. This is the mark of a great tech company, and investors should consider adding Take-Two to their portfolios to gain exposure to the exciting growth in the video game industry.