Please ensure Javascript is enabled for purposes of website accessibility
Log In Help Join The Motley Fool
Free Article Join Over 1 Million Premium Members And Get More In-Depth Stock Guidance and Research
By George Budwell – Feb 6, 2020 at 11:28AM

Aurora Cannabis and CRISPR Therapeutics have the potential to deliver million-dollar paydays for early bird investors.

The brave souls who were wise enough to buy shares of the sustainable energy juggernaut Tesla (TSLA 2.90%) or the streaming entertainment behemoth Netflix (NFLX 0.71%) early on have amassed some truly staggering gains over the past decade. An initial $1,000 investment into Tesla's IPO roughly 10 years ago, for instance, would now be worth a healthy $29,800. Likewise, a similarly sized investment in Netflix over the same time period would currently be worth $22,800. The point is that "big idea" stocks like Tesla and Netflix, while extremely risky during their formative years, can produce life-changing gains within a relatively short time frame.

Which big-idea stocks might be worth the risk right now? The struggling marijuana titan Aurora Cannabis (ACB 4.07%) and the unproven gene-editing company CRISPR Therapeutics (CRSP 4.07%) both sport jaw-dropping risk profiles as things now stand. If these fledgling innovators can validate their business models, however, their stock would undoubtedly make their early bird investors filthy rich. Here's what investors need to know about these two high-risk, high-reward companies. 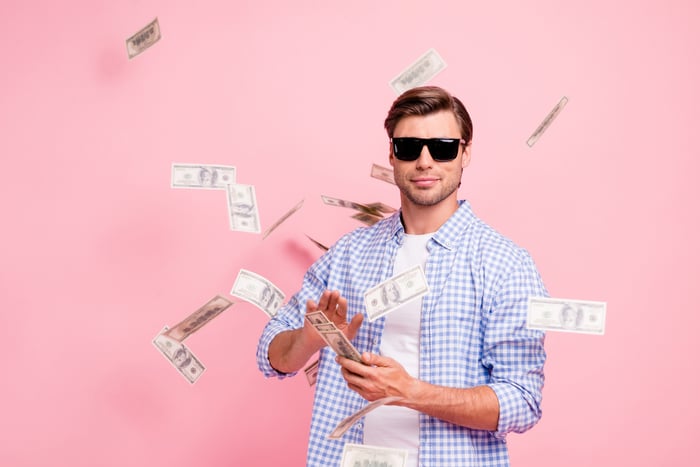 Aurora is a top-tier Canadian cannabis cultivator with aspirations of one day morphing into a multinational mega-giant. To achieve this, Aurora went on a merger and acquisition spree over the past two years, transforming itself into a one-stop shop for all things cannabis related. The bad news is that the global cannabis market flat-out failed to grow in lockstep with the company's enormous ambitions. The net result is that it has had to idle grow facilities, cut its workforce, repeatedly dilute shareholders, and take on far too much debt to keep the dream alive.

The ugly consequence of all these hurricane-force headwinds is that Aurora's equity has now lost 73% of its value over the previous 12 months, making it one of the worst-performing mid-cap healthcare stocks during this period. What's more, the company may still be a few more years away from achieving consistent profitability. Even more shareholder dilution may be on the way as a result.

That's particularly bad news for current shareholders, given that Aurora's share price isn't far off from violating the minimum-bid requirement for the New York Stock Exchange. That means that a dreaded reverse split (reducing the number of outstanding shares in order to boost the price per share) might be necessary in the near future.

Aurora, in short, is one seriously risky equity.

The pot titan's upside, though, is equally impressive. The global cannabis market has the potential to rise at a compound annual growth rate of 27% for the next decade, according to a report by Arcview Market Research. So if Aurora can simply hold on and edge out its closest competitors, it could be worth tens of billions of dollars by the end of the decade. That kind of exponential growth could even top that of superstar growth stocks like Netflix and Tesla. Of course, the clear and present danger here is that Aurora may never live up to the hype.

CRISPR Therapeutics is the clear front-runner in the race to bring a CRISPR/Cas9 gene-edited product to market. The company, along with partner Vertex Pharmaceuticals (VRTX 1.08%), has already revealed some encouraging preliminary data for their first gene-edited therapy, CTX001, as a cure for the rare blood disorders sickle cell disease and beta thalassemia. Even though this first set of indications carries a billion-dollar peak sales estimate, CRISPR Therapeutics' market cap is currently a mere $3 billion. In short, the market is far from persuaded that its novel therapeutic platform will indeed bear fruit.

But the biotech's present valuation arguably represents a once-in-a-lifetime buying opportunity for aggressive investors. The lowdown is that CRISPR Therapeutics' goal is to develop groundbreaking therapies for a wide variety of high-value indications, and perhaps in record time to boot. In brief, this mid-cap biotech could one day be a prime figure in the fields of rare diseases, hematology, and oncology. We're talking about a potential for hundreds of billions in annual sales.

What's the risk? the company's entire platform could amount to nothing more than an interesting science experiment at the end of the day. In that case, its stock would basically be worthless. So this probably isn't a name that investors will want to own in a retirement portfolio. On the flip side, Vertex has a proven track record for picking winners in the clinic. That speaks volumes about the potential of CRISPR Therapeutics' novel gene-editing platform.