Tesla (TSLA 4.67%) popularized the electric car, turning a niche product into a mark of distinction and "green" credentials for consumers. Will Amazon.com (AMZN 2.07%) do the same for retailers?

On Tuesday, Amazon's blog featured something of a surprising announcement. Hidden deep within "a sprawling industrial complex in Michigan," Amazon technicians working in cooperation with electric start-up Rivian are hard at work developing "the next generation of Amazon delivery vans -- electric-powered vehicles that will hit the roads beginning in 2021." 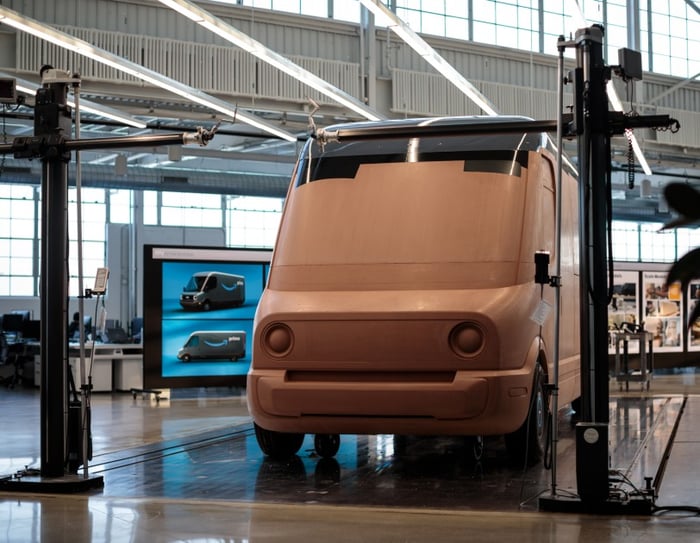 Amazon has a strong incentive to make this project a success, as it works to wring costs out of its business model by eschewing third-party delivery services such as FedEx (FDX 0.63%) and UPS (UPS 0.98%), and delivering its packages to consumers itself. Sure, Amazon is playing up a secondary goal, promising that "100,000 electric delivery vans will save millions of metric tons of carbon per year." But the real goal here is to remove every expense it can, drive prices lower, and squeeze every possible penny of profit out of its 5.1% operating profit margin.

Indeed I did. And that's arguably even the bigger story here. Bigger than Amazon's costs. Bigger than its "green" credentials. When Amazon gets its electric delivery van fleet fully deployed a few years from now, it will have more delivery vans in service than FedEx Express has in service (84,700 according to Statista). It will have nearly as many vans as UPS has "cars, vans, tractors, and motorcycles" -- 123,000 according to UPS.

Amazon's becoming a major player in delivery -- and it's all beginning in Michigan.

John Mackey, CEO of Whole Foods Market, an Amazon subsidiary, is a member of The Motley Fool's board of directors. Rich Smith has no position in any of the stocks mentioned. The Motley Fool owns shares of and recommends Amazon, FedEx, and Tesla. The Motley Fool has a disclosure policy.