Please ensure Javascript is enabled for purposes of website accessibility
Log In Help Join The Motley Fool
Free Article Join Over 1 Million Premium Members And Get More In-Depth Stock Guidance and Research
By Daniel Sparks - Updated Feb 6, 2020 at 9:56AM

Shares of the electric-car maker have soared recently. What should investors do?

With Tesla (TSLA -5.88%) shares skyrocketing in recent months, many investors probably have the same question: Should I buy or sell Tesla stock right now?

The stock has soared more than 200% over the past six months, with 65% of this gain occurring in the past 30 days. Some investors on the sidelines may be feeling like they are missing out. Furthermore, owners of the electric-car maker's stock may be wondering if this is a good time to take profits.

Unfortunately, the best answer may not be the one you're looking for. In a scenario like this, the reasonable course of action may be to simply do nothing. 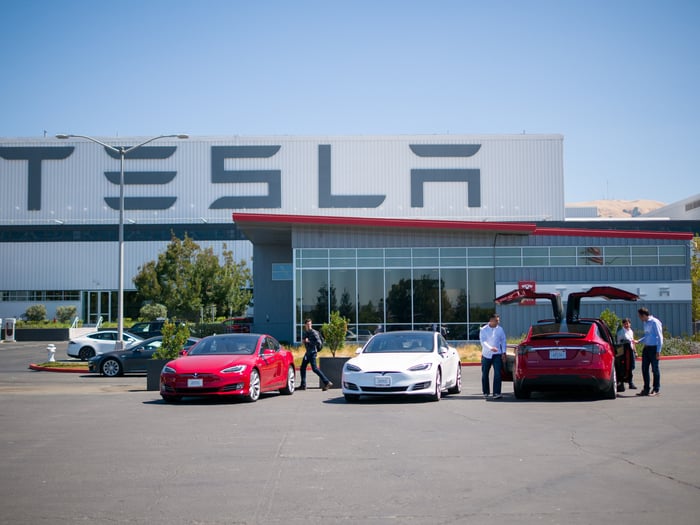 There's no denying the strong growth trajectory of Tesla's business. The company delivered about 368,000 vehicles in 2019 -- up 50% year over year. This performance was driven primarily by a more than doubling of the company's Model 3 deliveries. The vehicle, which is Tesla's most recently launched electric car, accounted for 82% of deliveries during the year.

To understand just how extraordinary Tesla's momentum is, it's helpful to zoom out a few years. The company wrapped up 2019 with nearly $25 billion of revenue. That compares with sales of about $3 billion only five years ago. More importantly, the company has gone from burning through billions of dollars of cash annually to generating about $1 billion of free cash flow in 2019 -- and management believes positive cash flow, for the most part, is here to stay.

"We expect positive quarterly free cash flow going forward, with possible temporary exceptions, particularly around the launch and ramp of new products," said management in the company's fourth-quarter update. "We continue to believe our business has grown to the point of being self-funding."

Looking ahead, the company is positioned to benefit from its robust product pipeline. As 2019 came to a close, Tesla started production of its China-made Model 3 at a factory in Shanghai (though, of course, production is currently paused because of the coronavirus outbreak). The new factory, which was built in less than a year, positions the company well to cater to the world's largest auto market. In addition, The automaker's Model Y crossover is coming to market sooner than originally planned, with deliveries starting in the first quarter of 2020. Then, of course, there's the Tesla Cybertruck and Tesla Semi, both of which are in development but are expected to hit the market in the coming years.

Lacking a margin of safety

Despite the company's impressive pace of execution recently, investors need to give valuation the weight it deserves when making investment decisions. No matter how exciting a company's prospects might seem, valuation cannot be ignored. Price matters.

Tesla stock's valuation after its torrid run-up means shares are pricing in exponential business growth for years to come, leaving little room for error. Currently, Tesla trades at about 120 times 2019 free cash flow. While growth stocks like Tesla should trade at premium valuations, this is particularly high -- especially for a company in a capital intensive industry. For Tesla to trade at a more reasonable price-to-free cash flow ratio of around 20 in the future, free cash flow will need to increase nearly sevenfold.

Even if Tesla can grow its annual free cash flow to $7 billion, it could take much longer than investors expect. The capital-intensive nature of the auto business may make profitably scaling operations more difficult than anticipated. Furthermore, future competition in the space could prove more formidable than expected.

In short, the stock's valuation today leaves no margin of safety for investors.

Of course, there's always a chance that Tesla goes on to exceed even the greatest expectations for the company. This is why shareholders shouldn't rush to sell, despite the stock's high price tag.

As it turns out, winners often keep on winning. Consider disruptive and innovative companies such as Amazon.com, Facebook, Apple, and Netflix. Shareholders willing to hold these companies for the long haul -- even through all the periods when they were considered overvalued -- were rewarded handsomely.

This could happen. On the other hand, it may be a pipe dream.

Buy, sell, or do nothing?

Considering both Tesla's speculative valuation and the fact that disruptive companies can sometimes greatly exceed expectations, investors thinking about taking action on Tesla stock may want to exercise the privilege of simply staying put and doing nothing.

Of course, no one knows with certainty whether it's best to buy, sell, or hold Tesla stock today. Shares could fall sharply from here, leaving shareholders feeling as if they missed a great opportunity to take profits. On the other hand, business execution in the coming years could exceed the euphoric expectations priced into the stock today.

Investors only have limited information in front of them -- information, in this case, that makes it unclear what action should be taken. Tesla is growing rapidly, and management is executing with more precision. Yet the stock's valuation prices in more extraordinary growth, which could be realized but may also prove to be far from reality.

Stay on the sidelines if you're already there and hope for a better buying opportunity in the future. If you're a shareholder, tune out the volatility and hold on to your shares as long as the underlying business is meeting or exceeding your expectations.