Please ensure Javascript is enabled for purposes of website accessibility
Log In Help Join The Motley Fool
Free Article Join Over 1 Million Premium Members And Get More In-Depth Stock Guidance and Research
By Beth McKenna - Feb 7, 2020 at 8:00AM

Pinterest (PINS -1.67%) delighted investors when it reported fourth-quarter and full-year 2019 results after the closing bell on Thursday. Shares skyrocketed 17% in after-hours trading on Thursday, suggesting that the visual-forward social media company's performance on Friday could make for one pin-worthy stock chart.

We can attribute the market's pleasure, in part, to both fourth-quarter revenue and adjusted earnings beating Wall Street's consensus estimates, as well as Pinterest's revenue guidance. (The company doesn't provide earnings guidance.) But the bigger catalyst was surely the much-better-than-anticipated 2020 revenue outlook.

Oh, what a difference a quarter makes! Last quarter, investors pummeled Pinterest stock nearly 20% after it released its results, because revenue fell short of analysts' expectations and full-year 2019 revenue outlook was lighter than many had been anticipating. As I wrote at that time, I thought the market "overreacted a bit, as one quarter doesn't make a trend and it's likely the company lowballed its revenue guidance to be on the safe side." 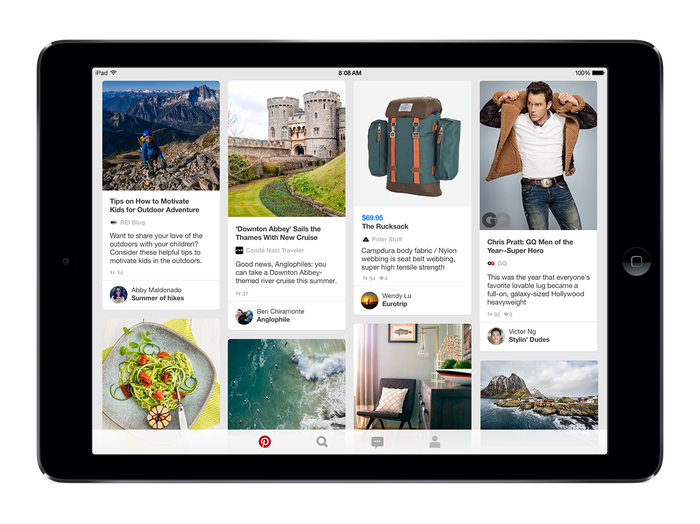 Nearly 88% of the company's total revenue was derived from ad dollars in the United States -- even though it has more international users -- because it realizes a much higher average price per ad in this country.

The apparent disconnect between the net income-EPS pairs for the quarter vs. the year-ago period is due to the fact that there are significantly more shares available now following Pinterest's initial public offering (IPO) in April.

As for the profitability results above that "flipped to negative from positive" in the year-ago period, this is nothing to be concerned about at this early point. As is typical for a newly public tech company, Pinterest is using its IPO money to rapidly scale up its operations, so it's incurring losses on a GAAP basis.

Wall Street was looking for adjusted EPS of $0.08 on revenue of $371.2 million, and Pinterest sailed by both expectations.

The number of MAUs in the U.S. rose 8% year over year to 88 million, while the number of international MAUs jumped 35% to 247 million.

Last quarter, Pinterest's global MAUs increased 28% year over year, with U.S. MAUs growing 8% and international MAUs surging 38%. So, sequentially, this metric was flat in the U.S. and edged down slightly internationally.

For industry context, social media behemoth Facebook, which reported its Q4 earnings last week, had 2.89 billion MAUs and an ARPU of $7.38 for its family of services, which include Facebook, Instagram, WhatsApp, and Messenger.

In its shareholder letter, Pinterest said it expects 2020 revenue of "up to $1.52 billion." (Yes, the "up to" language is curious, and in the future should be replaced by either a range or "at least.") This represents growth of up to 33% year over year. Going into the report, Wall Street had been modeling for 2020 revenue of just $1.11 billion. So, you can see why Pinterest stock soared in Thursday's after-hours trading session.

"Our strategic priorities for 2020 include content, ads diversification, use case expansion and shopping," the company said in the letter.