Please ensure Javascript is enabled for purposes of website accessibility
Log In Help Join The Motley Fool
Free Article Join Over 1 Million Premium Members And Get More In-Depth Stock Guidance and Research
By Mark Prvulovic – Feb 7, 2020 at 8:24AM

If candidate drug risdiplam is approved, it could be a major competitor to treatments already developed by Biogen and Novartis.

On Thursday, Roche (RHHBY -1.10%) announced the much-anticipated results from a study of the company's experimental spinal muscular atrophy (SMA) drug, resdiplam. The biotech giant released the full data from its Sunfish trial, which tested patients with type 2 or type 3 SMA between the ages of 2 and 25 to see whether doses of risdiplam would improve their motor function. 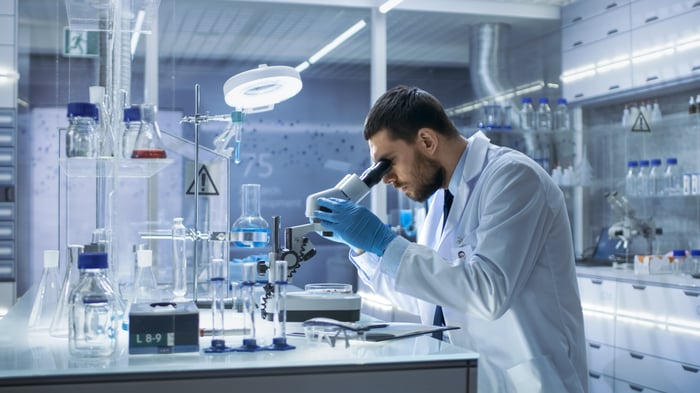 The biotech giant hopes that these results will help improve the drug's chances of receiving Food and Drug Administration approval; it successfully secured a priority review from the agency in November.

SMA is a genetic disorder that causes patients to lose muscle control due to the deterioration of nerve cells in the spine and brain. It's a rare condition, occurring in only one in 10,000 live births. While most types of SMA manifest symptoms in childhood, in rare instances, the disease's symptoms don't start to develop until adulthood.

Both Novartis' Zolgensma and Biogen's Spinraza are available to treat SMA patients. However, both drugs are extremely costly. Spinraza carries a $750,000 price tag for the first year of treatment, with subsequent years costing $375,000. Zolgensma, a one-shot gene therapy, is the world's most expensive drug with a price tag of $2.1 million.