Global demand issues will make it difficult for the chemicals giant to outperform in 2020.

Shares of Dow (DOW) traded down 15.8% in January, according to data provided by S&P Global Market Intelligence, but it wasn't a straight march down during the month. The company actually delivered an upside earnings surprise, causing its shares to temporarily spike higher, but ultimately the momentum couldn't last as a number of concerns weighed on the stock. 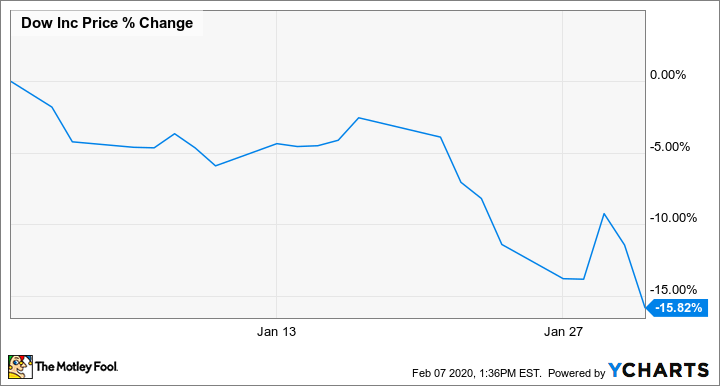 Shares of Dow, one of three publicly traded companies formed out of the 2019 breakup of DowDuPont, were under pressure for most of the month due to the company's significant exposure to the Chinese economy and fears that the coronavirus would cut into global industrial demand.

But the company's fourth-quarter results, announced Jan. 29, came in better than expected, with Dow beating earnings-per-share estimates by $0.06 and revenue expectations by $110 million. The company credited its lean cost structure, the strength of its raw material sourcing, and leading positions in end-markets for helping it to weather headwinds including price and margin compression.

Dow's momentum didn't last long, however, as RBC Capital downgraded the stock to sector perform, with a price target cut to $54 from $59. Analyst Arun Viswanathan wrote that weak pricing and poor margins are likely to persist through 2020, making it difficult for the company to continue to post strong earnings.

Dow is a good company in a difficult market. The financial engineering that first merged legacy Dow and DuPont and then broke that entity into three smaller, more streamlined businesses has created a materials powerhouse with global exposure and industry-leading sourcing and distribution.

Unfortunately, there's nothing to be done about Dow's exposure to the commodity cycle or a possible industrial recession, and Viswanathan is correct in saying that it will be difficult for Dow to overachieve when global demand for its products is ebbing. Dow can be a good investment, but that will likely take time to play out. Investors do get the benefit of a 6% dividend yield if they decide to buy in and wait out the cycle.