Looking for dividend stocks that will generate big returns? These companies could elevate your portfolio.

History shows that companies that pay dividends tend to outperform the broader market over the long term. High-quality dividend stocks allow investors to take advantage of the power of compounding, paving the way for substantial wealth creation. Companies that dependably pass cash along to shareholders also tend to hold up better in volatile markets because they offer the prospect of a bankable return.

Building a foundation of dividend-paying companies with resilient businesses, sustainable competitive advantages, and favorable trends at their backs is one of the best ways to dramatically outperform the market without taking on elevated risk. Investors seeking dividend stocks that can deliver powerful long-term returns over the next decade should consider adding these three companies to their portfolios. 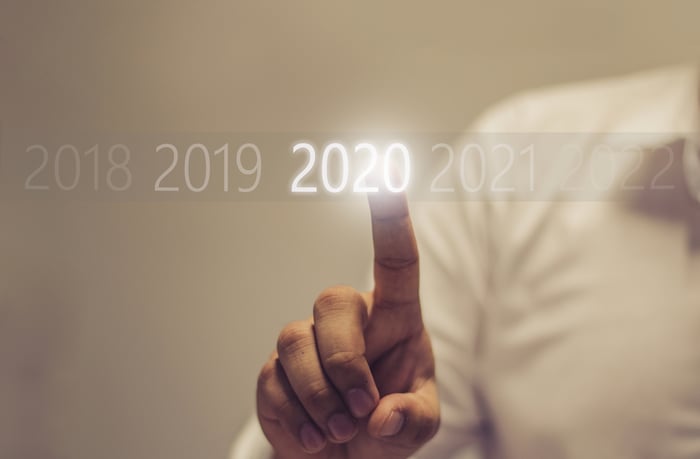 1. The TJX Companies: Thriving in a pressured retail environment

The TJX Companies (TJX 1.65%) is a stock that offers a rare combination of growth potential, strong defensive characteristics, and a significant (and growing) returned income component. Shares yield roughly 1.5%, and the company has raised its dividend annually for 23 years straight.

The stock's yield might come in below what some investors are looking for, but the off-price retailer has made great progress boosting its payout and is in good shape to keep the growth coming. Even after the company raised its payout roughly 667% over the past decade, the cost of covering its forward distribution still comes in at just 51% of free cash flow over the trailing 12-month period.

TJX operates retail chains including T.J. Maxx, Marshalls, HomeGoods, Sierra, Winners, and Homesense, and it has a brick-and-mortar imprint of more than 4,300 stores across nine countries. With e-commerce continuing to gain ground, some investors might be hesitant to embrace companies that depend on brick-and-mortar locations, but TJX's demonstrated excellence in inventory management, ability to offer great bargains, and "treasure hunt" style shopping experience have allowed it to thrive even as the broader retail sector has been pressured.

The company even managed to post great performance in the midst of and during the aftermath of the 2008-09 Great Recession. 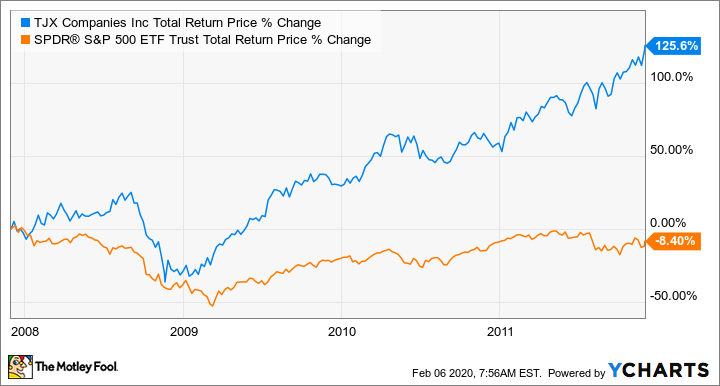 TJX's same-store sales, revenue, and adjusted earnings per share climbed in each of the four years following the kickoff of the last downturn, and the company's stock crushed the broader market across the stretch. The company has seen its annual same-store sales fall just once in the past 44 years, and its smartly run business and growing returned income component make the stock worth owning for the long term.

Cisco Systems (CSCO 1.55%) is a leader in the network routing and switch hardware space that's been making a push into software and service offerings. It looks like an attractively valued dividend play that can help investors benefit from the boom in networked data that will take place over the next decade.

Cisco's business looks sturdy, its shares trade at a modest 15 times forward earnings estimates, and recent sell-offs have pushed the stock's dividend yield up to roughly 3%. The company has raised its payout in each year since it initiated distribution in 2011, and the past five years have seen it hike its payout by roughly 84%.

The networking giant has also been on a big stock-buyback push. While some large-cap companies have gone overboard with share repurchases in recent years, Cisco's buybacks have looked pretty smart in the context of the company's nonstretched valuation, strong margins, and business tailwinds on the horizon.

In addition to using its strong cash flows and an influx of repatriated cash courtesy of the 2017 Tax Cuts and Jobs Act to raise its dividend and repurchase shares, the company has also been buying up a wide range of software and specialized-hardware companies to shore up its position in the networking industry. With tech shifts including the Internet of Things and the rollout of 5G networks set to create substantial new catalysts for the world's ongoing data boom, Cisco has made smart bets to build strength in categories like cybersecurity, artificial intelligence, and analytics.

While competitors may increasingly be able to replicate the functions of its core switch and router hardware, Cisco appears to have made sure that no rival will be able to offer a more comprehensive set of services. The company's ability to meet so many next-gen networking needs and offer unified support from a single provider is a moat that looks underappreciated at present and should help the business thrive in the next stages of the Information Age.

3. Ventas: This healthcare REIT is priced at a discount

Ventas (VTR 1.76%) is a real estate investment trust (REIT) that specializes in properties that provide healthcare services. The company's stock packs a roughly 5.5% dividend yield, and its shares look attractively valued on the heels of a big sell-off that occurred last year.

The stock got crushed in November when the company reported third-quarter earnings that arrived with a shift to much more conservative guidance for 2020. Prior to the release, Ventas had projected that this year would mark the beginning of a substantial acceleration for rates and occupancy at its senior-living properties and power the company to growth, but the shift is taking longer than initially anticipated.

Shareholders sold out of the stock following the underwhelming guidance, but the long-term thesis for improved performance at Ventas (along with hefty dividends) remains intact. Investors have an chance to build a position in the REIT at a discount.

Ventas stock is off roughly 22% from its 52-week pricing high, trades down roughly 9% over the last year, and has dipped 16% from over the last five years. The baby boomer generation aging into retirement means that increased demand for healthcare and senior-living services over the next decade is a relatively safe bet, and the market's dissatisfaction with the timetable at Ventas has created an opportunity that could prove very rewarding for patient investors.