Enterprise Products Partners (EPD -0.25%) recently put the wraps on another great year. The master limited partnership (MLP) set a total of 28 operating and financial records in 2019, including producing $6.6 billion of distributable cash flow, which was 11% above 2018's level.

That fast-rising cash flow gave Enterprise the funds to continue growing value for its investors, which was one of the takeaways on the company's fourth-quarter conference call. It's why the company remains an excellent choice for dividend investors. 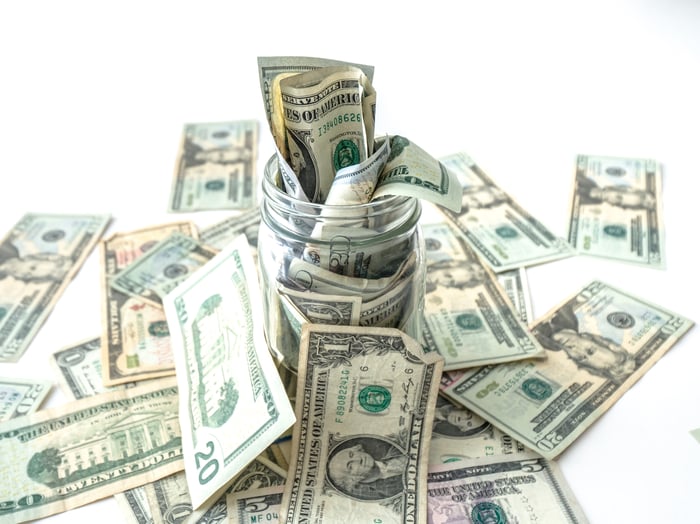 Fueling Enterprise's strong year was its ability to complete $5.4 billion of expansion projects, which enabled the company to transport and export record volumes of hydrocarbons last year. Since it primarily gets paid fees as oil and gas flows through its systems, it cashed in as more energy moved across its network.

"The record cash flow we generated in 2019 allowed us to increase the distribution paid to our partners for the 21st consecutive year," according to co-CEO Jim Teague on the call. Overall, it increased its payout each quarter, boosting it 2.3% for the year. That brought its dividend growth streak up to 62 consecutive quarters.

Enterprise only paid out about 59% of its cash flow last year, which included both its distribution as well as its unit repurchase program. Because of that, it was able to retain $2.7 billion to invest in expansion projects.

That was enough money to support "self-funding the equity portion of our growth capital investments," according to Teague. It financed the debt portion (about 33% of total capital spending) with its top-tier balance sheet. Because it self-financed such a large percentage of its capital projects with retained cash, Teague noted that the company "completed 2019 with a lot of financial flexibility and a very strong balance sheet."

Enterprise Products Partners expects its cash flow to continue rising this year. While there are some headwinds in its non-fee-based businesses, it did complete a large slate of expansion projects last year that will help offset those issues. Because of that, Teague "expect[s] 2020 to be a strong year. It's hard to set new records every year, but with our people and our footprint, I'd be real careful betting against us."

The company plans to allocate that cash much the same way it did in 2019. It expects to continue giving investors a modest raise each quarter, growing its payout by slightly more than 2%.

Enterprise also plans to allocate about 2% of its cash flow to repurchase more units this year. "Using 2019 as a base," stated co-CEO Randy Fowler on the conference call, "these proposed distribution increases and the unit buybacks would result in about a 5.6% increase in the amount of capital that we are returning to limited partners in 2020 compared to 2019 of which 60% of this increase is through buybacks."

That will still leave the company with enough money to fully fund about 50% of its $3 billion to $4 billion in planned capital spending. It will use debt, which it already raised, to finance the other 50%.

Meanwhile, if capital spending comes in at the low end of its range, or cash flow trends higher as its headwinds go away, Enterprise would consider "the potential for higher buybacks," according to Fowler.

Enterprise Products Partners continues to produce a prodigious amount of cash. Because of that, it has the money to fund its high-yielding distribution with so much room to spare that it can internally finance its expansion projects and repurchase some units while maintaining its top-notch balance sheet.

It's one of the many reasons why Enterprise is an excellent stock for dividend investors to buy.