Please ensure Javascript is enabled for purposes of website accessibility
Log In Help Join The Motley Fool
Free Article Join Over 1 Million Premium Members And Get More In-Depth Stock Guidance and Research
By Brian Stoffel – Feb 8, 2020 at 11:41AM

I simply didn't count on this happening.

In October 2016, former Fool John Maxfield and I squared off on Chipotle (CMG -1.48%) stock. He believed it had better days ahead of it. I did not.

For the first two years, I felt good about my thesis: Chipotle largely underperformed. But since New Year's 2019, the stock has more than doubled -- far outpacing the market.

The company reported fourth quarter earnings this week. Chipotle's comparable store sales were up 13.4% -- a breath-taking amount in the current restaurant environment. That's enough for me to throw in the towel. John, you win.

Let's see why that happened and -- just as important -- why it's okay to lose "bets" like this. While I was still a fan of Chipotle-the-restaurant, the stock no longer fit within my investing framework. It all boiled down to a few simple concepts that I thought made the company long-term fragile:

Given these factors, I sold my shares as soon as trading rules allowed.

In the restaurant world, there's no metric more important than comparable-store sales, or comps. This tells us how much more (or less) business existing stores produce year after year. By factoring out the effect of new stores, we can see if a restaurant is really popular, or just making it look that way by building lots of new locations.

In general, any restaurant that can keep comps above the rate of inflation is keeping its head above water. As you can see below, Chipotle has been on a steady -- and increasingly torrid -- trend. 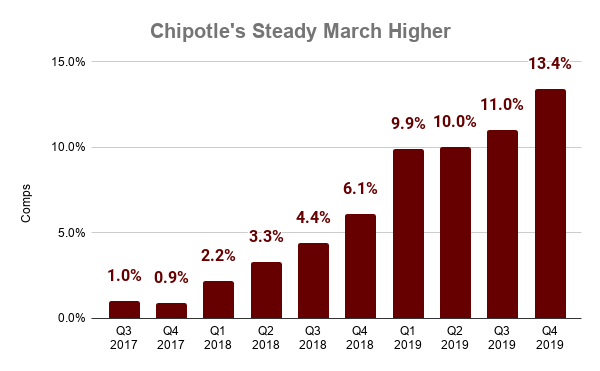 This isn't normal. Usually, companies the size of Chipotle start seeing comps slow down over time. It makes sense: The more success you have, the harder it is to accelerate growth over the long run.

But that's just what Chipotle has done, thanks in large part to a wildly successful online ordering system.

Alas, we can't always pick the winners. But here's the great part about investing: It's just fine if you sell a stock that goes on to be a winner.

Being a "successful investor" -- whatever that might mean to you -- doesn't mean picking every winning stock. If you focus on every one-that-got-away, you're headed for a world of misery -- no matter how good your returns look. It only takes one or two successful investments, held for the long term, to satisfy the real needs of most investors.

At the end of the day, investing needs to serve you -- not the other way around. I was crystal clear about why I didn't like the stock. The fact that my thesis hasn't panned out has provided an opportunity to learn: Just because I deem something "fragile" doesn't mean it will "break" any time soon. And with each passing day (and the fading memories of food-borne illnesses), that fragility lessens. But I couldn't have known that back then.

Most importantly -- I didn't lose any sleep over my decision. Chipotle wasn't the first stock I sold that went on to be successful. It certainly won't be the last. And that's okay.

John, if you're reading this, I owe you a beer.