Please ensure Javascript is enabled for purposes of website accessibility
Log In Help Join The Motley Fool
Free Article Join Over 1 Million Premium Members And Get More In-Depth Stock Guidance and Research
By Reuben Gregg Brewer - Feb 10, 2020 at 11:21AM

Chevron has been drilling for oil a long time. Investors should listen when the company talks about the industry's key drivers.

Oil and the companies that drill for it are both deeply out of favor today.

There's a host of reasons, including a supply/demand imbalance caused by increasing U.S. onshore energy production. Only investors are increasingly focused on near-term events like the attack on Saudi oil facilities and geopolitical moves by countries like the U.S. and Iran. The CEO of oil giant Chevron (CVX 0.59%) is looking past temporary issues like these, and so should you. Here's why.

In an interview with CNBC in January of 2020, Chevron CEO Michael Wirth was asked about the increasing tensions between the U.S. and Iran. He quickly pointed to an attack on Saudi Arabian oil assets in late 2019 that took key production assets off line. The news led to a swift rise in the price of oil, but prices quickly settled back down. He predicted that the same would happen again with Iran, because the oil market is "pretty well supplied." He was correct -- oil prices initially rose, but then pretty quickly fell again. 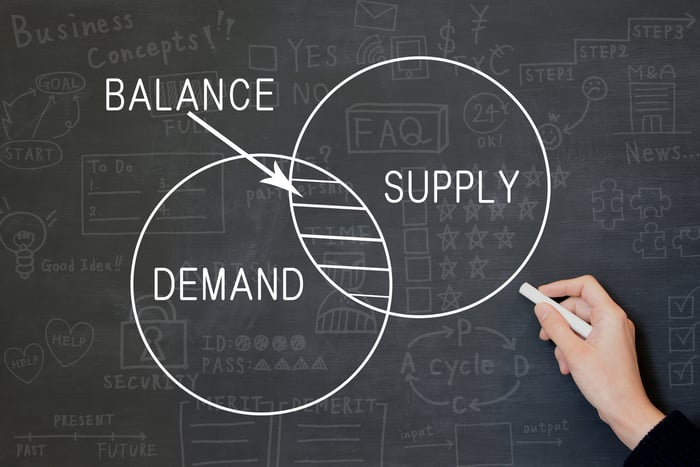 When asked if headline grabbing news events like these change the way Chevron looks at the industry, Wirth was very clear. They are a reminder of the risks that oil companies face, but:

We look at a long-term view, really, on supply and demand. And we don't overlay these shorter-term phenomena into our thinking about price.

Right now energy markets are well supplied, as Chevron's Wirth noted. In fact, the big issue is really too much supply, which is helping to keep oil and natural gas prices low.

This is largely because of the rapid growth in production in the U.S. onshore market. The U.S. Energy Information Administration (EIA) estimates that U.S. crude oil production reached a new record in 2019. And it projects that production will increase again in 2020 and 2021. The United States is now the largest oil producer in the world, according to the EIA.

That's the bad news. The good news is that smaller and financially weak drillers in the U.S. onshore space are struggling. Many are going bankrupt. As Exxon's Woods highlighted, that's just normal for the industry.

In fact, it's pretty normal for all commodity-based industries. Companies get overzealous when prices are high, and then there's a shakeout when supply ramps up and prices, inevitably, fall. That's what helps keep supply and demand in balance. Even OPEC is helping out this time around, with calls for its members to cut production in an attempt to support oil and natural gas prices. 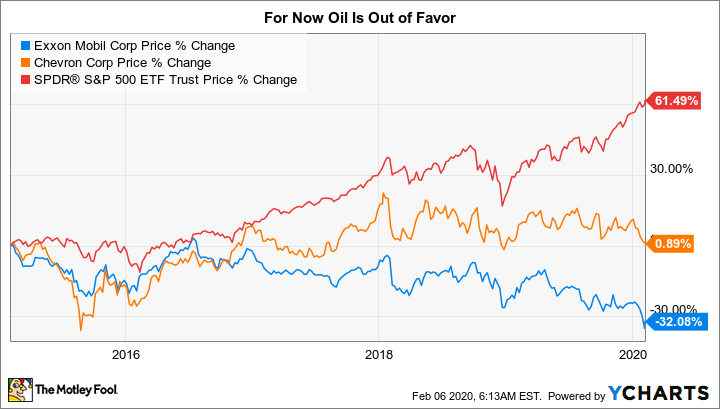 So supply is basically doing what the oil industry expects, but what about demand?

In a world that's increasingly focused on ESG investing and halting global warming, this could be a big problem. This is true over the very long term, but carbon fuels today are an integral part of the global energy pie and can't be easily or quickly displaced. Oil, for example, took roughly 100 years to replace coal as the dominant global energy source. Oil will eventually be replaced, but for now the world still needs oil and gas.

The International Energy Agency (IEA) recently provided its world energy outlook for 2020. Based on the currently stated global warming goals of countries around the world, it expects oil demand to grow until 2025 and then pretty much plateau until 2040. Demand for natural gas, meanwhile, continues to grow fairly strongly all the way out to 2040.

Simply put, oil and natural gas aren't going away. A growing global population, notably in developing markets, and increasing global prosperity are key drivers here. Sure, the world could get more serious about global warming, which would reduce demand, but so far few countries have actually managed to live up to their stated goals. If that trend continues, the IEA's projections might even prove too negative.

There's another factor to consider here, as well. Oil and natural gas are depleting assets. So once a barrel is pulled from the ground, it is gone for good. And oil wells don't produce forever, with production from some wells, notably U.S. shale, starting to slow down within just a couple of years.

Listen to these CEOs

These are the big picture supply/demand dynamics that oil companies are watching. Yes, oil is a volatile commodity prone to swift price swings based on current events. But CEOs like Wirth and Woods can't run their businesses by zigging and zagging with the price of oil. They have to make long-term plans based on what they believe will be the industry's long-term drivers.

If you are watching oil stocks, you should follow their lead.