Please ensure Javascript is enabled for purposes of website accessibility
Log In Help Join The Motley Fool
Free Article Join Over 1 Million Premium Members And Get More In-Depth Stock Guidance and Research
By Steve Symington - Feb 10, 2020 at 8:00AM

It's been a wild ride for the electric vehicle maker.

It seems an understatement to say the past several months have been crazy for Tesla (TSLA 4.67%) investors.

Shares of the electric vehicle (EV) maker have more than tripled over the past four months, spurred by a more-than-30% pop in October alone thanks to the company's far-better-than-expected third-quarter 2019 results, the impending production ramp up of made-in-China Model 3 vehicles at its new Shanghai Gigafactory, and excitement surrounding the planned November unveiling of what we now know as Tesla's Cybertruck.

Then came Tesla's equally impressive fourth-quarter report just over a week ago, which saw shares jump more than 10% in a single day, as Tesla not only said deliveries of its new Model Y crossover will begin next month, but also revealed revenue, earnings, and free cash flow that far exceeded Wall Street's expectations. 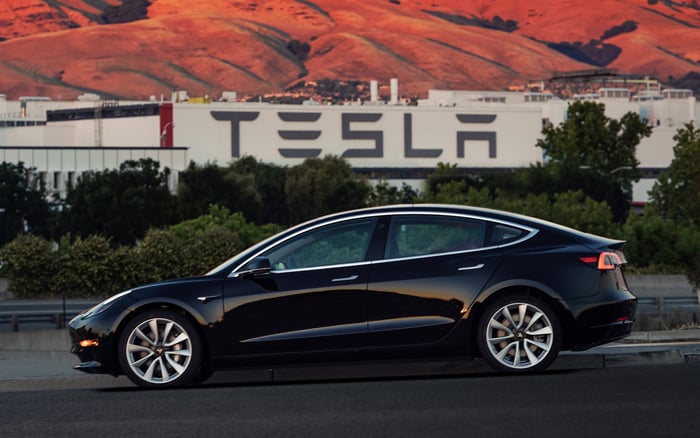 To be clear, Tesla stock has climbed "only" 15% so far in February as of Friday's close. But to get there meant first rallying nearly 50% over the course of three trading days -- briefly setting an all-time high of $968.99 per share -- then plunging nearly 23% from that mark to end last week at roughly $748 per share.

For perspective on how we got here, let's recap Tesla's wild week.

First, Tesla stock kicked off February by extending its post-earnings rally as multiple analysts weighed in to argue it had plenty of room to run.

Argus analyst William Selesky, for one, increased his 12-month price target to $808 from $556 last Monday, pointing to both the company's 500,000-vehicle delivery guidance for 2020 and its clear electric-vehicle industry leadership.

But noted Tesla bull ARK Invest offered an even more ostentatious goal, increasing its four-year (2024) price target for Tesla to an eye-popping $7,000 per share -- a figure the firm says hinges on Tesla's ability to continue to reduce costs, bolster margins, and command an outsized slice of the fast-growing EV market.

As my colleague Daniel Sparks pointed out at the time, this wave of optimism further pressured Tesla's growing chorus of short-sellers -- that is, traders betting that Tesla stock will fall -- to cover their bearish positions, resulting in a short squeeze that further drove shares higher.

That pressure only increased last Tuesday, when shares rallied another 13.7% after longtime Tesla bull Ron Baron told CNBC that this is "just the beginning" of Tesla realizing its potential. Baron also noted his firm, Baron Capital, hasn't sold any shares of Tesla stock since it began amassing what's now a 1.63-million-share stake almost six years ago, and mused Tesla could hit "at least" $1 trillion in revenue within the next 10 years.

Tesla briefly touched its all-time high around $969 per share on Tuesday in response, then -- in perhaps a telling moment foreshadowing what was to come the next day -- pulled back sharply into the close as traders took some of their profits off the table.

Tesla followed by sinking more than 17% last Wednesday, driven by a combination of the fallout of the ongoing coronavirus outbreak in China and Wall Street predictably voicing concerns over the sustainability of the stock's torrid rise.

Regarding the former, on Wednesday a Tesla executive in China confirmed via social media platform Weibo that Model 3 sedans previously scheduled for delivery in early February would be delayed due to a government-mandated factory closure. The executive also pledged that Tesla China will "catch up the production line once the outbreak situation gets better."

To be fair, this shouldn't have been entirely surprising considering Tesla CFO Zachary Kirkhorn warned as much during the company's first-quarter conference call late last month, saying the company expected a roughly one- to one-and-a-half-week delay in the ramp up of made-in-China Model 3s stemming from the shutdown. And even then, Kirkhorn said the impact of the situation would likely be "limited as the profit contribution from Model 3 Shanghai remains in the early stages."

Finally -- putting aside a brief drop and subsequent recovery on Thursday morning -- Tesla shareholders enjoyed relative calm toward the end of the week, with shares waffling between positive and negative territory.

So where does that leave investors today?

On the one hand, bears will likely seize on the idea that Tesla's rise merits a sharp correction. The death toll attributed to the novel coronavirus also continues to increase with no end in sight, so investors would do well to remain cognizant of the threats of any extended factory closures and -- perhaps less likely -- the ripple effects that could extend to supply chain disruptions for Chinese parts used in Tesla's other factories.

On the other hand, in my experience winners tend to keep on winning. And even putting aside Tesla's recent inflection to sustained positive cash flow and profitability, Tesla bulls could enjoy another positive catalyst in the near future with the company's upcoming "Battery Day" presentation in April.

During last quarter's conference call, Tesla founder and Chairman Elon Musk insisted that the company has no plans to raise capital. Rather, Musk said the company is focusing now on lowering the cost of batteries and increasing production, and teased that the Battery Day event will "blow your mind."

If Tesla is able to convince investors that it has maintained or extended its already enviable EV industry leadership with surprising progress on the battery front, I won't be the least bit surprised if it helps extend the stock's already meteoric run.