Please ensure Javascript is enabled for purposes of website accessibility
Log In Help Join The Motley Fool
Free Article Join Over 1 Million Premium Members And Get More In-Depth Stock Guidance and Research
By James Brumley - Feb 11, 2020 at 10:49AM

The decision from Alphabet's subsidiary could embolden other television intermediaries to do the same, or at least push back.

Few were surprised when Alphabet's (GOOGL 5.11%)(GOOG 5.20%) Google Fiber unit stopped offering traditional (linear) cable TV to new customers last week. Indeed, with estimates putting the number of television customers for Google Fiber at less than 1 million even though the service launched all the way back in 2011, some are wondering why Google waited this long to pull the plug (and it still hasn't fully pulled it -- existing Fiber TV customers will continue to enjoy their service, for now).

More noteworthy, however, was Google's subtle shot at video content providers on its way out the door. The company's blog post only said what most people were thinking (and what most cable companies quietly know). But now that it's been acknowledged in no uncertain terms by one of the world's most recognizable names, perhaps the rest of the video entertainment industry can stop pretending otherwise. This may well hasten the implosion of the cable television business as we know it.

The company delivered the bad news in a public blog post last Tuesday, describing the slow but undeniable shift away from the old mass broadcast approach and toward on-demand programming delivered digitally via the internet. It's also known as cord-cutting and has been underway for a while. It was how Google's post said it that raised so many eyebrows though. Not mincing words, the company officially made clear that "customers today just don't need traditional TV," adding, "You no longer need pricey bundles that force you into paying for channels you'll never watch, taking away your choice and control." 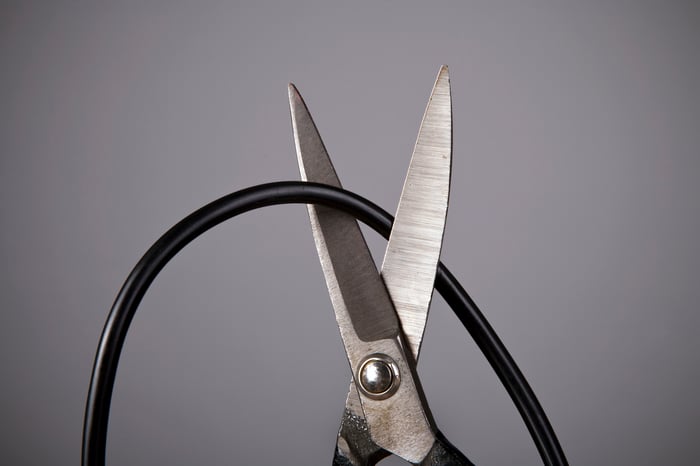 The piece de resistance: The same post noted that "you really only need one thing: fast, fair, reliable Internet."

To that end, Google will now only focus on perfecting its high-speed internet service, allowing its customers to procure their on-demand entertainment anywhere they like. The organization will also be nice enough to sign new customers up with fuboTV when they subscribe to Google's gigabit service. It will even assist new broadband customers with signing up for YouTube TV, which now boasts more than 2 million paying customers.

Paving the way for other cable TV middlemen

None of this is new, or news, of course. Investors who've been following this story since its inception will recall the 2014 comment from Google Fiber executive Milo Medin explaining the price of procuring programming accounted for the "single biggest piece of our cost structure" of Google Fiber TV's growth. He added that Google was paying as much as twice what its rivals were paying for the same video content -- a penalty for small scale that ultimately prevents new competition from surfacing. The company has since implemented price increases for its television service but noted increased programming costs each time it did.

Except, now the trend has reached a tipping point at a time when alternatives are numerous and legitimate. A combination of services from Netflix and Hulu's Live TV can suffice for the average TV viewer, for example, particularly when augmented by free streaming content from Amazon's IMDb TV and what will be a fully ad-supported version of Peacock from Comcast (CMCSA 1.18%) subsidiary NBCUniversal.

And Comcast, for the record, has intimated the same even as it's played a role in rising cable prices. It's now perfectly willing to let cable customers go. CFO Mike Cavanagh bluntly said last year "we will not chase unprofitable video subs," alluding to the reality that a great deal of your monthly cable bill is actually passed along to the channels providing that cable content. Instead, like Google, it prefers to grow its higher-margin broadband business.

Bottom line? Other middlemen can now start to abandon bad video content licensing deals as well, taking cover behind the much more prominent name that just did the same.

The fallout, for better or worse

Don't misread the message. Established cable providers and other technology-oriented intermediaries that offer so-called skinny bundles aren't going to all immediately tell video entertainment producers and cable channels their products are no longer needed. Some will stick with their partnerships just hoping to be the proverbial last person standing, taking a chance everyone else in the business will be the one to call it quits -- as Sony did with Vue. Fewer competitors mean greater scale for survivors, and scale is critical in the cable television business.

When a giant like Google gives up on a business model and explicitly tells consumers to seek out more of the very thing eating away at the model, it's no small deal. That's why you shouldn't be surprised to see similar decisions in the near future.

Sure, cable TV companies are implicated, but content creators could end up being hurt a lot more than content middlemen. Cable companies have already taken most of their lumps, with many of them preparing to offer the consumer more a la carte, ad-supported streaming options that require internet service. They'll be collecting less TV revenue per subscriber then, and it seems unlikely they'll remain interested in paying inflated video content prices.