Please ensure Javascript is enabled for purposes of website accessibility
Log In Help Join The Motley Fool
Free Article Join Over 1 Million Premium Members And Get More In-Depth Stock Guidance and Research
By Lee Samaha - Feb 11, 2020 at 7:35AM

The power tools company continues to face headwinds to its earnings, but management is doing an excellent job of generating underlying growth.

Investors are unlikely to buy stock in Stanley Black & Decker (SWK 0.26%) for what it is right now, but may want to consider what it could become in a few years' time.

Trading on 26 times earnings, the stock is hardly cheap on a conventional basis. However, if it continues its underlying growth trajectory and the headwinds caused by tariffs, foreign currency movements, and commodity costs were to abate, then the stock could turn out to be cheap after all. Here's the lowdown. 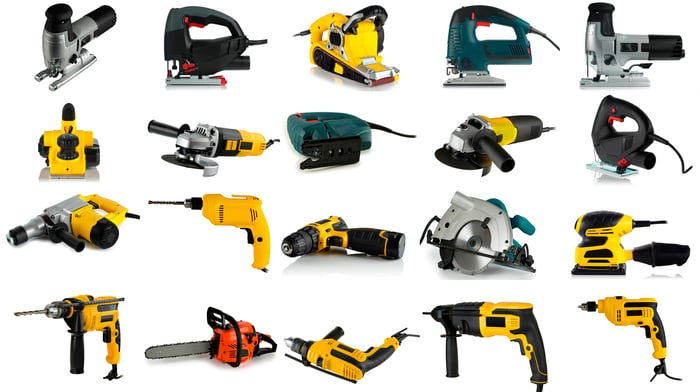 The nature of the beast was revealed early on in Stanley's earnings call when CEO James Loree outlined how the company suffered "$445 million of external pre-tax headwinds from tariffs, FX and the like, a significant portion of which were not and could not have been anticipated at the beginning of the year."

To put this figure into context, the company's pre-tax income was $1.13 billion in 2019. Loree would go on to state that the external headwinds "have averaged about $300 million a year" over the three-year period from 2017 to 2019.

Simply put, Stanley has been hard hit by rising commodity and tariff costs and unfavorable foreign exchange movements in recent years. Consequently, you could argue that the company's headline earnings figures aren't reflective of its ongoing potential.

As you can see below, management expects organic revenue growth of 3% to lead to $0.40-$0.50 in EPS growth with management's cost reduction plan contributing a further $0.95. But a combination of tariff and foreign currency headwinds ($115 million in dollar terms) and a less favorable tax rate are set to hold back earnings growth. Without the $0.65 headwind to EPS, the company could have been set for earnings growth in the mid-teens. 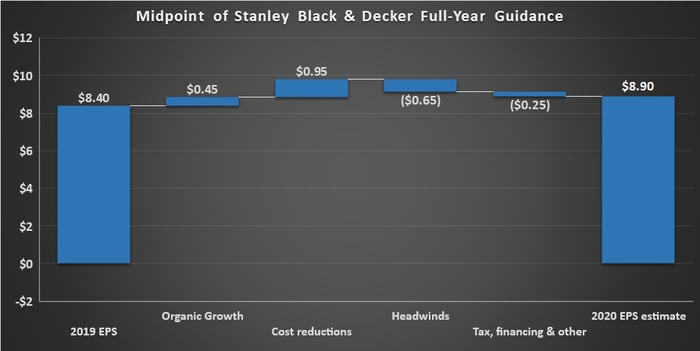 In addition to the potential upside from an absence of headwinds in the future, bulls will also argue that the company has top class management who has positioned the company for underlying growth for years to come. This can be seen in three ways in recent years.

The acquisition and development of brands like Craftsman tools (bought from Sears in 2017) and Lenox and Irwin brands (bought from Newell Brands in 2017) has added growth potential. In fact, management expects mid-single-digit organic revenue growth from the tools & storage segment in 2020.

Moreover, the company announced plans to buy aerospace fastener and component manufacturer, Consolidated Aerospace Manufacturing (CAM), for $1.95 billion contingent upon a timely return to service for the Boeing 737 MAX -- the deal could boost growth in the industrial segment (16.7% of segment profit in 2019) currently feeling the pinch from a weak industrial manufacturing environment.

Meanwhile, the turnaround in the security segment will strengthen the company's hand, should management decide to divest the business -- an update is promised by midyear.

Putting it all together, Stanley's management is doing all the right things in a difficult end market environment. Consolidating industries in a downturn is usually a good idea, and the cost cuts are creating the possibility of leveraging future revenue growth into outsized earnings growth. An improvement in the industrial economy will also help, particularly if it's accompanied by an easing in trade tensions.

All told, the stock may not look superficially cheap right now, but there's plenty of growth potential down the line. It's definitely the sort of stock worth looking at given any market-led share price weakness.