Shares of Diebold Nixdorf (DBD -7.08%) stock plunged in early trading Tuesday, falling 17.8% through 11:45 a.m. EST after the company "missed" on its Q4 earnings report this morning.

Analysts had predicted that the ATM maker would earn $0.50 per share in adjusted profits on sales of $1.16 billion, but Diebold whiffed on both counts. Total sales for the quarter were just $1.15 billion, and the company's pro forma profits fell short at $0.47 per share. 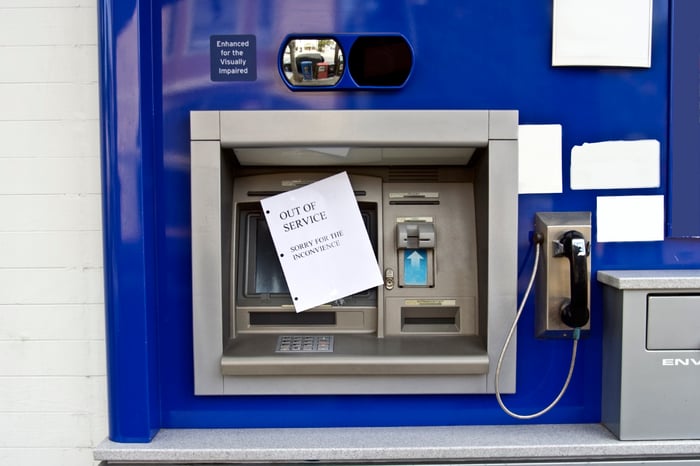 Diebold's sales declined 11% year over year in Q4, with the falloff declining as the year progressed. (Sales for the full year were down 4% at $4.4 billion.) On the plus side, gross profit margins earned on Diebold's sales surged more than 7 full percentage points to 23.5%. (For the year, gross margins were up even higher -- 24.2%).

Problem was, operating costs at the company also surged, keeping Diebold mired in operating losses according to generally accepted accounting principles or GAAP (albeit not as badly as last year) -- even as the company insisted it was earning "adjusted" profits and meeting its "previously announced financial outlook for 2019."

Looking ahead, Diebold warned of further sales declines in fiscal 2020. New guidance for the company predicts sales will run between $4.2 billion and $4.3 billion, thus less than the $4.4 billion collected in 2019 and below analyst predictions besides.

Despite all this, there's one glimmer of hope: With predicted operating cash flow of between $170 million and $200 million, and capital spending expected to be limited to $70 million, Diebold says it will generate somewhere from $100 million to $130 million in free cash flow this year, an improvement on the $93 million generated in 2019 -- and a big improvement over the $163 million in cash burned in 2018.