Please ensure Javascript is enabled for purposes of website accessibility
Log In Help Join The Motley Fool
Free Article Join Over 1 Million Premium Members And Get More In-Depth Stock Guidance and Research
By Rich Smith - May 3, 2019 at 4:38PM

What goes up, goes down, then goes up again.

After the fall comes the bounce.

ATM manufacturer Diebold Nixdorf (DBD -1.66%), shares of which more than quintupled in value earlier this year, lost 28% of that value over the two days following its earnings report this week. Now, however, the stock appears to be enjoying something of a rebound. On Thursday, Diebold gained 6.5%. Today, the stock closed another 14.7% higher. 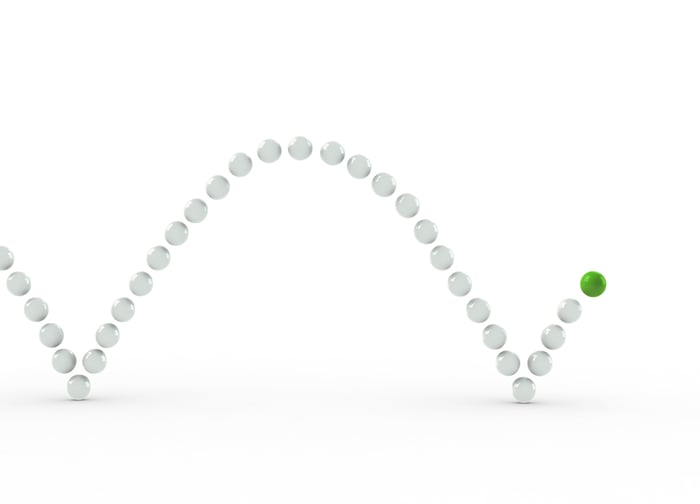 This still leaves Diebold shareholders a good 8.4% poorer than they were when the week began. Still, the rebound suggests that some investors may have begun looking past the stock's "negative momentum" earlier in the week and toward the future in hopes of better news to come.

In that regard, Diebold told investors on Tuesday that despite losing money in the first quarter, it still expects to book revenue of between $4.4 billion and $4.5 billion in 2019, and to stop burning cash, returning to free cash flow "breakeven" by the end of the year.

And in that regard, it's worth noting that although Diebold didn't promise any particular GAAP earnings number, analyst estimates show that they will be looking for Diebold to earn $0.30 per share this year. It's going to be hard for Diebold to climb out of the hole it's dug for itself in Q1. On the plus side, all Wall Street will be looking for in the company's next quarterly report (for Q2) is another loss -- $0.12.

So, at least the bar's set low.