Please ensure Javascript is enabled for purposes of website accessibility
Log In Help Join The Motley Fool
Free Article Join Over 1 Million Premium Members And Get More In-Depth Stock Guidance and Research
By Alison Healey - Feb 12, 2020 at 7:36AM

Solar power projects remain in demand as clean energy goals become more ambitious, and these three companies are working to stay ahead of the trends.

A number of factors are fueling the need for new solar projects, including corporate buyers, state requirements, coal plant retirements, and lower costs for equipment and construction. The rise of sophisticated storage assets has also made solar more attractive, since solar-plus-storage projects can bank power to use when the sun is not shining. The U.S. Energy Information Administration expects 13.5 gigawatts (GW) of solar capacity to come online in 2020, surpassing the previous record of 8 GW in 2016.

Here's a solar module maker, a diversified utility, and an evolving oil major that may warrant a closer look. 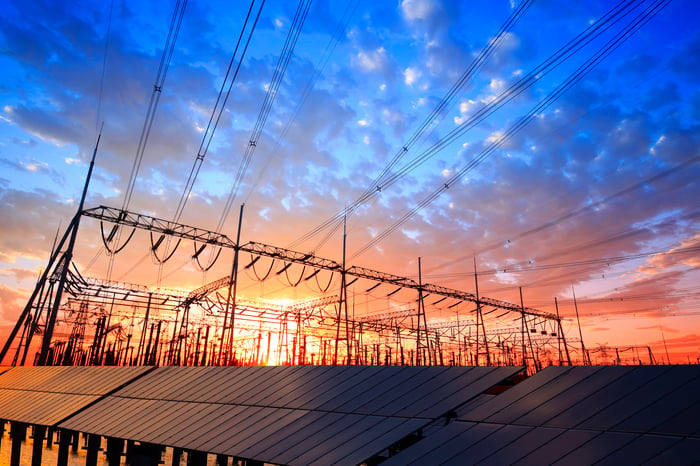 Canadian Solar (CSIQ 2.10%) is a large-scale manufacturer of solar panels that has delivered over 38 GW of modules to customers in more than 150 countries since the company launched in 2001.  The company is active in many phases of the solar value chain, owning, operating, and selling utility-scale projects as well as providing residential solar installation. Canadian Solar's Recurrent Energy development unit also has approximately 7 GW of solar and storage projects in development in the U.S.

The company has underperformed the S&P 500 over the past decade and the company has had a hard time generating returns. It has also seen its debt-to-capital surge to 63%, so there is certainly work to do for the company to reach more stable financial footing. But Canadian Solar has made moves to address these challenges and recently put some new initiatives in place to maximize shareholder value. The company expanded its board, adding a new director, and brought in a veteran energy investor as a strategic advisor.

The board member is Lauren Templeton, the founder of Tennessee-based investment boutique Templeton & Phillips Capital Management and the niece of value investing pioneer Sir John Templeton. The advisor, Karl E. Olsoni, has more than 30 years experience in the energy business, with previous stints as Chief Financial Officer of PPM Energy and Koch Materials and more than 16 years working with Southern Company as it grew its independent power business.

Investors should consider the company right now based on those initiatives as well as the introduction of new technology that is likely to fuel some large new sales, as evidenced by a multiyear module supply agreement announced earlier this month. The company reached a deal with Lightsource BP, an affiliate of the U.K.-based oil giant BP, to deliver 1.2 GW of its new, high-efficiency polycrystalline solar modules for projects in the U.S. and Australia. The deal covers what are known as bifacial modules, which generate power from both the front and the back to increase power output and decrease the cost of electricity.

AES Corporation (AES -2.55%) deserves a look because the company has shown it understands the importance of combining solar projects with storage, and these hybrid projects are seeing more demand.  The company is active in renewable and traditional power generation, transmission, and distribution in 14 countries and has been developing solar and solar-plus-storage projects since 2009. Earlier this year the company opened the world's largest battery plant paired with solar generation on the Hawaiian island of Kauai.

Solar development is only one piece of what AES does, but that piece has been growing and positively impacting the bottom line for shareholders. The company posted Q3 adjusted earnings of $0.48 per share, an increase of $0.13 compared to Q3 2018, and attributed the increase to contributions from businesses including US renewables. The company also expects growth to stem from a recently formed 10-year strategic alliance with Alphabet to develop and implement solutions to enable broader adoption of clean energy. The company said in a December investor presentation it expects capital expenditure of $1.5 billion for its backlog of projects and projected power purchase agreements for the 2019-2022 period, and its more than 6 GW backlog is split 50/50 between wind and solar power.

With a market capitalization at more than $13 billion and a dividend yield of more than 2%, an investment in AES would offer investors a chance to get in on solar and battery development with the benefit of more traditional utility-based revenue streams.

The oil major with a solar subsidiary

Total SA (TTE -1.38%), a French oil major, is probably not the first name that comes to mind when most people think of renewable energy. But the company holds interests in more than 3 GW of operating renewable power and owns utility-scale solar in Japan, South Africa, the United Arab Emirates, and Chile. The company also holds a controlling interest in SunPower, a commercial and residential solar developer that continues to face a high debt load but has improved its financial condition over the year, resulting in a share price increase of more than 50%.

Solar is a small piece of the overall picture for Total, since the company has a market capitalization greater then $130 billion and a massive pool of assets in multiple businesses around the world. The company has seen mixed results from its multiple business lines in terms of year-over-year revenues, with its exploration and production, refining, and marketing segments declining, while the gas, renewables and power unit saw an increase. But with a dividend yield of more than 6% and an 8% increase in free cash flow for 2019, the company represents an opportunity for the more conservative investor to benefit from solar upside but also get the diversification of oil and gas, petrochemical, and other renewables assets.