Please ensure Javascript is enabled for purposes of website accessibility
Log In Help Join The Motley Fool
Free Article Join Over 1 Million Premium Members And Get More In-Depth Stock Guidance and Research
By Jennifer Saibil - Feb 12, 2020 at 6:48AM

With the company's leadership in flux and a major restructuring plan scrapped, Gap is at an important crossroads.

The company is at a crossroads, having generated a still impressive $4 billion in sales during its fiscal third quarter, though that figure was down 2% from the prior year, marking the fourth consecutive period of revenue declines. In other words, despite its nearly 4,000 store locations around the globe, various headwinds threaten the business, and company leadership seems to be at a loss on how to proceed. Interim CEO Robert Fisher has called this a "pivotal" time. 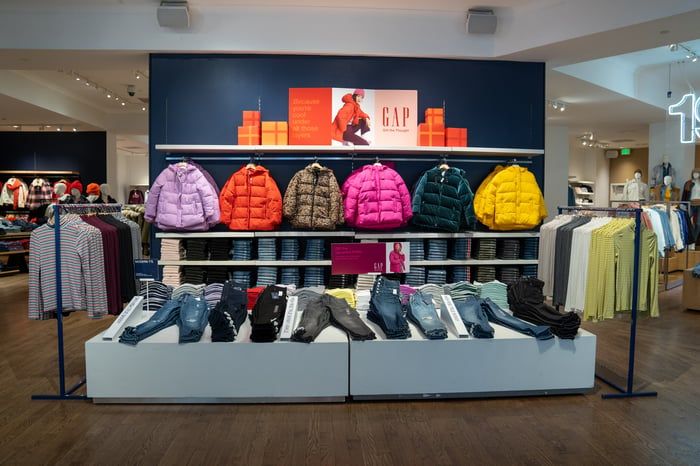 After four years as CEO, Art Peck stepped down from his position in late 2019. He was quickly followed by Gap brand CEO Neil Fiske who departed the company in January. Now, several months since Peck's departure, the word is still out on who the new CEO will be, and the longer that position is left empty, the longer the company is left directionless with investors growing more bearish by the day.

This uncertainty is only worsened by the company's decision to cancel the spin off of Old Navy, its once strongest segment. Peck had previously claimed the restructuring would unlock the brand's true value, leaving Gap with the resources and focus to dedicate to its namesake business, which has been underperforming for years.

Old Navy contributed 49% of total revenue in the third quarter and represented the company's primary source of growth until recently. Comparable sales went flat in the fourth quarter of 2018 and have been negative through the first three quarters of 2019.

Though the market initially supported the spin-off proposal by pushing shares higher, Gap also saw modest gains when canceling those plans, given the chaotic developments around Peck's departure and worsening trends at Old Navy.

Moving out of China and growing at home

Gap also announced in late 2019 that Old Navy will be exiting the Chinese market where it has been operating since 2014. During the third-quarter earnings call, CFO Teri List-Stoll said:

The investment needed to grow the business would be significant, and we see greater value-creation opportunities by focusing on other higher-return strategies such as increasing our digital capability and continuing to invest in the proven growth opportunity in underserved North American markets.

The company's departure from this market is expected to occur in early 2020 and represents just another manifestation of the struggles Gap faces as it tries to put itself on more solid footing.

However, at an investor day last September, the company announced it was planning to open approximately 800 Old Navy stores in North America, mostly in small, underserved areas. That would bring the brand's total store count to 2,000 in its home market, but again, the likelihood of such an expansion remains unclear since the spin-off was canceled.

Art Peck was a Gap insider, having been with the company for 10 years before taking the helm as CEO. The apparel retailer needs to follow in the footsteps of retail stars like Starbucks and Nike, which made way for new leadership with tech backgrounds to step in. Digital has been the way forward for many consumer companies, and handling the company like a data- and tech-driven enterprise is the best way for Gap to make a comeback.

Moving in that direction, the company needs to unlock and refresh its customer experience, whether that's by creating unique retail experiences at its stores or fostering a community with digital apps and its rewards program. That means giving customers an opportunity to experience the brand and then choosing to make purchases in-store or online. Such changes may require shuttering stores, but the new CEO will have to endure short-term losses in favor of long-term gains.