Please ensure Javascript is enabled for purposes of website accessibility
Log In Help Join The Motley Fool
Free Article Join Over 1 Million Premium Members And Get More In-Depth Stock Guidance and Research
By James Brumley - Feb 12, 2020 at 10:28AM

The new owners still have to fix what's broken if they're going to justify the unusual arrangement.

Struggling apparel retailer Forever 21 is set to become the joint property of mall operators Simon Property Group (SPG 0.64%) and Brookfield Property Partners LP (BPY) for a modest $81 million. The fast fashion company declared bankruptcy in September and was hoping to benefit from an auction of itself on Monday. But no other interested parties submitted bids, so the consortium of two retail landlords and one branding manager is the de facto winner unless the presiding judge decides otherwise. The buyers will also inherit at least part of Forever 21's debt, although much of that indebtedness is to themselves, for lease payments.

It's a risky proposition for the obvious reason -- Brookfield and Simon Property manage malls, but a consumer retail business is something else altogether. A handful of analysts are skeptical, too, while others note that Simon and General Growth Properties (later acquired by Brookfield) were able to dig Aeropostale out of trouble after buying it out of bankruptcy in 2016.

Forever 21 isn't Aeropostale, however, and for the premise of mall-owned retailers to earn credibility, very specific things will need to happen from here.

How Forever 21 got in trouble

Some of the pain privately-owned Forever 21 has suffered in recent years can be chalked up to the broad industry headwind often referred to as the retail apocalypse. Part of the blame, however, also has to be laid at its own feet. 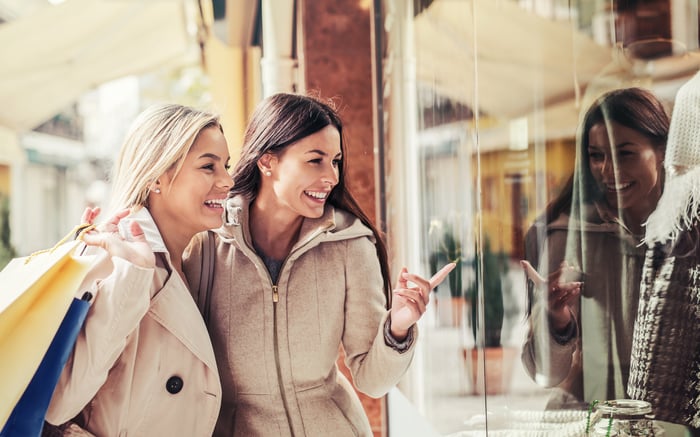 Consider Forever 21's aggressive physical growth coming out of the 2008 recession, which put it on a collision course with the internet as a means of shopping for clothing. September's bankruptcy announcement indicated the company could close as many as 350 of its 800 stores, many of which were simply too big to support themselves.

The retailer also found itself something of a misfit in the era of fast fashion, with too much merchandise and square footage to move quickly.

Fortunately, the path to redemption is reasonably well-defined, consisting of three key pillars. Unfortunately, as Simon Property chief executive David Simon was willing to concede, saving Forever 21 will be "a little more complicated and a little bigger" than turning Aeropostale around.

Brookfield's and Simon's shareholders can take solace in knowing that the two REITs will be buying Forever 21 for a song. But given how much additional time, effort, and capital may be necessary to revive the apparel chain, the consortium can't afford to get it wrong and subsequently risk crimping its rental real estate cash flow. Investors will want to look for progress on three fronts.

Of Forever 21's estimated annual revenue, on the order of between $2 billion and $3 billion, only 16% of it is driven by e-commerce. That's below average for the industry.

Improving online sales isn't just an opportunity to add incremental revenue, however. A stronger e-commerce machine is also a driver of foot traffic to stores, where shoppers may make additional purchases. Consumer research outfit Invesp reports that 75% of shoppers who make an online purchase to be picked up at a store say they're likely to buy something else once they're there.

The bankruptcy proceedings are set to cull Forever 21's store count; Brookfield and Simon will just have to deal with some lost rent. With the remaining stores, though, there's still the issue of size. The average location is almost 40,000 square feet, and most cover at least 10,000. The average store's sales don't justify that much space.

The solution to the problem is easy, but messy. Forever 21 can rearrange its spaces within malls, handing the unused portion back to landlords -- who, in this case, are still largely Simon Property and Brookfield Property Partners. Such remodels are expensive, but a smaller store is better than no store in terms of attracting new mall tenants.

Finally, Forever 21's failure is a reflection of the company's misguided inventory management. Dave Bruno, director of retail market insights for Aptos, commented a week ago, "Assortments will make or break Forever21 in the future. Store size will certainly be an issue, but first they must work to adapt their assortments to shifting consumer trends -- and possibly expand their core customer segments."

Cathy Hotka, principal of Cathy Hotka & Associates, agreed with the sentiment, saying at RetailWire's virtual roundtable that "Forever 21 has two major issues: inventory problems (imagine a whole store where the only size available is XS), and a belief that its customers are all teenagers. New owners...will have to start there."

The new norm in mall retailing?

No fix will take effect overnight, though improvements would ideally start to become evident well before this year's busy holiday shopping season.

There's far more going on here, however, than two mall owners simply saving a tenant and hopefully collecting the more than $13 million the apparel chain owes the two of them. This deal could end up completing the validation of mall-owned retailers that the ownership of Aeropostale put into motion. Certainly real estate investing purists won't like the melding of lessors and lessees, but if the model works, don't be surprised to see more deals like this one.