Please ensure Javascript is enabled for purposes of website accessibility
Log In Help Join The Motley Fool
Free Article Join Over 1 Million Premium Members And Get More In-Depth Stock Guidance and Research
By Rich Duprey – Updated Feb 18, 2020 at 11:11AM

But simply scrambling a few eggs might not be enough to crack into the crowded space.

Wendy's (WEN -2.25%) breakfast menu is going national next month, as the morning daypart becomes increasingly critical to the quick-serve industry as a whole and to the burger joint's own growth potential.

Although the launch has been in the works for a while, it's an opportune time Wendy's chose to pick a fight with McDonald's (MCD -0.67%), which finds itself in turmoil and under siege from all sides. 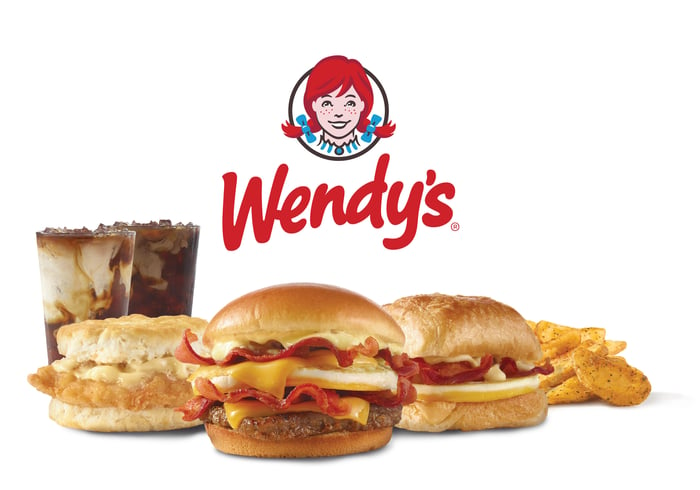 Breakfast is the most important meal of the day

Wendy's has essentially been sleeping in when it comes to breakfast. It's one of a few national quick-serve chains that doesn't have a breakfast menu other than at a few hundred restaurants. But beginning on Mar. 2, it will be bringing a rejuvenated lineup of sandwiches and morning drinks to the entire chain.

In so doing, it says it hopes to provoke a "Breakfast Battle," a seemingly not-so-veiled threat to its rival McDonald's, which has long dominated the space. It's certainly been an important component of the chain's core business, accounting for 25% of the traffic the Golden Arches sees and as much as 40% of its profits.

It was a key reason why McDonald's finally broke down and began offering breakfast all day long. As it struggled to win back customers that fled the restaurant as it pursued millennial consumers with upscale fare, it chose to give customers one of the things they clamored for most -- breakfast at any time of the day. It worked for a while, but McDonald's has been struggling, most recently because its CEO was ousted for personal indiscretions.

His successor, CEO Chris Kempczinski, recently emphasized that breakfast is still of utmost importance to the company, telling analysts in his first earnings conference call for the chain, "Breakfast is the only daypart in the industry that's seeing traffic growth. We have to win at breakfast."

Wendy's is supporting the effort with a $20 million marketing campaign that it believes can help grow the daypart to become responsible for 10% of total U.S. sales. Year-to-date total revenue is almost $1.3 billion, so that's a tall order for the chain, though it's not expecting that to happen overnight.

Nor is it going to be easy because, as noted before, Wendy's has been a late riser. Numerous competitors have made substantial investments in breakfast, including Dunkin, Starbucks, Panera Bread, Chick-fil-A, and even Taco Bell.

Yet Wendy's is way behind the pack, and morning leaders like Dine Brands'IHOP are branching out even further by launching a fast casual breakfast chain. Simply making a few egg sandwiches available to customers at sunrise might not be the catalyst that moves the needle.

Ready to dig in

The investment is also going to ding performance. Wendy's has revised its guidance as a result of a strong third quarter so that it no longer expects adjusted earnings per share to be down 3.5% to 6.5%, but rather sees it being up 1.5% to down 1.5%. However, free cash flow is still expected to fall between 2% to 7% because of breakfast.

That could be seen as an investment in its future, but it needs to see those investments pay off, which may not pan out as expected. But if Wendy's is looking for a food fight, it looks like it will have one on its hands.

Editor's note: This article has been updated. Todd A. Penegor is CEO of Wendy's.