This brand powerhouse forecasts a strong year -- but the coronavirus epidemic could upend its financial targets.

Global hotel franchisor Wyndham Hotels and Resorts (WH 6.36%) revealed robust fourth-quarter 2019 earnings on Thursday before the markets opened, and included healthy earnings guidance for full-year 2020 in its release. The company's outlook comes with a boldface asterisk, however, in the form of potential impacts from the ongoing coronavirus epidemic that originated in Wuhan, China.

Below, let's review the hotel specialist's financial scorecard, as well as the specifics of the 2020 guidance, bearing in mind that all comparable numbers that follow refer to those of the prior-year quarter. 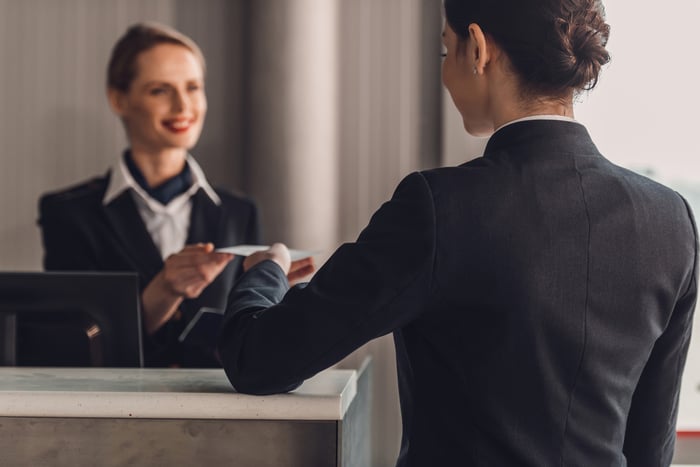 A benign full-year forecast, with a caveat

Wyndham noted in its press release that it achieved tangible results in 2019 despite a rather soft environment for the hotel industry. CEO Geoffrey Balloti observed, "We finished 2019 with another solid quarter, capping off a year in which we delivered rooms growth, earnings growth and free cash flow that were in line with our expectations despite headwinds from a soft RevPAR environment. We achieved these results through consistent execution, careful expense management and disciplined capital allocation."

The organization aims to continue this tight management approach to earnings in 2020. Wyndham's 2020 outlook targets a top line excluding cost reimbursements of $1.46 billion-$1.49 billion. At the midpoint of the range, this will represent an increase of 3% of over 2019's $1.43 billion in revenue before cost reimbursements.

The consumer discretionary stalwart anticipates generating adjusted EBITDA of $635 million-$645 million this year, or an increase of 4.4% over 2019's adjusted EBITDA of $613 million (at the midpoint of the range). Adjusted diluted earnings per share (EPS) are slated to rise nearly 8% to between $3.48 and $3.58.

The framework excludes any effects of the coronavirus epidemic. Wyndham's global exposure is significant, though perhaps not as concentrated as some of its multinational peers; its non-U.S. rooms equal roughly 40% of its total systemwide base.

During the company's earnings conference call on Thursday, management revealed that approximately 70% of Wyndham's hotels in China remain closed at present. For now, management has quantified potential headwinds from coronavirus (not included in its 2020 forecast outlined above) as follows:

The key word in Wyndham's phrasing is "potential." At this point, these are approximations of the outbreak's damage to a relatively small portion of its business. However, the longer the epidemic persists in China, and the further its spreads across Asia and beyond, the higher the likelihood that these estimates may harden into a fully year earnings revision next quarter. This slight uncertainty factored into the stock price on Thursday, as Wyndham shares traded down roughly 1.5% at mid-day.