The gold miner is experiencing some issues at two key mines.

Shares of Agnico Eagle Mines (AEM -0.19%) had declined by more than 12% by 11:30 a.m. EST on Friday. While the gold mining company reported better-than-expected fourth-quarter results, it issued disappointing production guidance for 2020.

Agnico Eagle Mines ended 2019 by producing higher-than-anticipated fourth-quarter results. The gold miner posted $0.37 per share of adjusted earnings during the period, which beat analysts' expectations by $0.02 per share. Driving that result was higher realized gold prices and record quarterly gold production of 494,678 ounces. That pushed its full-year total to a record 1.782 million ounces, slightly above its guidance range of 1.77 million to 1.78 million ounces. Because of those strong results, the company boosted its dividend by 14%. 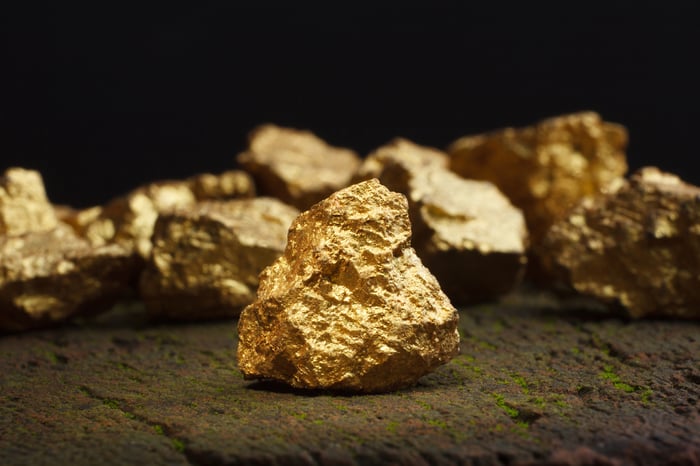 But it reduced its production outlook for 2020. It now expects to produce 1.875 million ounces, below its prior guidance range of 1.9 million to 2.0 million, though the company did leave its 2021 midpoint at 2.05 million ounces.

Weighing on its expected output this year will be a slower-than-expected ramp-up at its new Nunavut operations in Canada and a more conservative mining plan at LaRonde's West mine in Quebec. The ramp-up issues will cause costs to rise during the first quarter, which will weigh on profitability, though the company expects an improvement after that period.

Start-up issues are common in the mining industry. Unfortunately, Agnico Eagle's issues at Nunavut are coming at a time when gold prices have been rising, which means it won't be able to take full advantage of them in the near term. But it believes its issues are temporary, and it projects 18% production growth through 2022 along with declining costs, making it a potentially appealing gold stock for long-term investors.