There's a method to the promotional madness at the world's leading ridesharing service.

I've been placing more restaurant delivery orders through Uber (UBER 1.88%) lately, and it's at this point where I may as well dab my lips with my napkin and congratulate the ridesharing giant for a nudge done well. Let's start at the beginning, with Uber's first promotional course.

A couple of weeks ago, Uber Eats sent me a promotion for 30% off my next five eatery orders. I had to use them up within a week, and only worked my way through a pair of discounted meals. As that promotion was expiring, I got a similar weekly deal for 30% off my next five Uber Eats orders as long as they were for at least $50 this time. It seemed strange that Uber would want me to take even more of its money, but then came a third offer for the same 30% discount on my next five orders with the minimum transaction floor rising to $60. It didn't take me long to realize the brilliance of Uber and its persuasive skills. 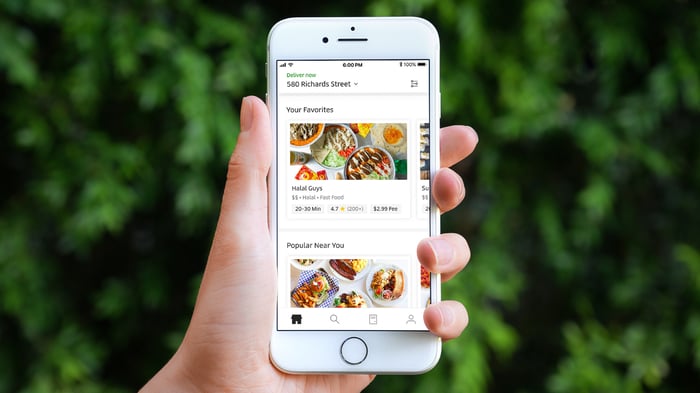 Into the digestive tract

Uber Eats gets a lot of grief from investors, and deservedly so at first glance. It's a drag on its parent company's bottom line. A whopping three-quarters of Uber's adjusted EBITDA deficit in its latest quarter is tied directly to the hemorrhaging at Uber Eats. The segment's adjusted EBITDA hole is larger than Uber Eats' $415 million in net adjusted revenue during the holiday quarter.

One can argue that Uber should dump Uber Eats, and with it all of the discounted meals that I've consumed these past few weeks. But it's not that simple. Just like the way that Uber Eats is tugging at my stomach strings, there's a great purpose for Uber's aggressiveness in food delivery.

Uber Eats has deliberately sent me three weeks of promotions that walk me down the plank of dependence. If I wasn't entirely comfortable with Uber Eats as a platform before, I am now. Lifting the order minimums once I was on the hook serves both its restaurant partners that are now scoring larger take-out transactions and Uber Eats drivers who are commanding larger tips as a result of the pricier customer outlays.

Uber knows what it's doing. It obviously has a firm handle on its namesake ridesharing service. The segment that accounts for 81% of Uber's net adjusted revenue has seen its adjusted EBITDA profit nearly quadruple over the past year. Uber's ridesharing business is no stranger to walking customers into relying on the platform. When a chunk of time passes without me hailing an Uber ride, I tend to get a promotion that offers me a discount on all of my rides the following week for taking a single ride this week.

Investors toast when streaming services and social networking sites use the gobs of data that they're accumulating to better target the wants of their users, and it's time that Uber gets the same kind of market cred. It has 111 million monthly active platform consumers now, and it completed more than 6.9 billion trips last year. Uber has to be a lot smarter now than it was a year ago.

Uber may be young as a publicly traded entity. It's technically still in its rookie season as one of last year's springtime IPOs. However, Uber is a lot smarter than worrywarts think. There's a method to the promotional madness at Uber, and right now it seems to be working.