Please ensure Javascript is enabled for purposes of website accessibility
Log In Help Join The Motley Fool
Free Article Join Over 1 Million Premium Members And Get More In-Depth Stock Guidance and Research
By Royston Yang – Feb 16, 2020 at 10:44AM

Here's why investors should be turning their attention to the coffee giant.

Whether you are on your early morning commute or just relaxing and catching up with friends, it's highly likely that you will visit a Starbucks (SBUX -1.24%) outlet to either grab a quick cuppa or to chill and soak in the ambience. The coffee giant had a total of 31,795 stores at the end of the first quarter of the fiscal year 2020, of which slightly more than half are in North America. Starbucks has epitomized the new coffee culture and has become a part of our modern lifestyle with its ubiquitous stores.

As a customer, I can understand why Starbucks continues to be so popular and holds the lion's share of the market. The company has a very effective loyalty program that works on personalization by using huge amounts of customer data to curate preferences and build deep connections. Starbucks had 18.9 million active rewards members at end the first quarter of 2020, up 16% year over year, and 43% of members in the U.S. use their rewards card out of total dollars tendered, a two-year high .

This alone may seem like a strong reason to buy Starbucks' stock, but here are three other great reasons why I believe this company is poised to continue its growth. 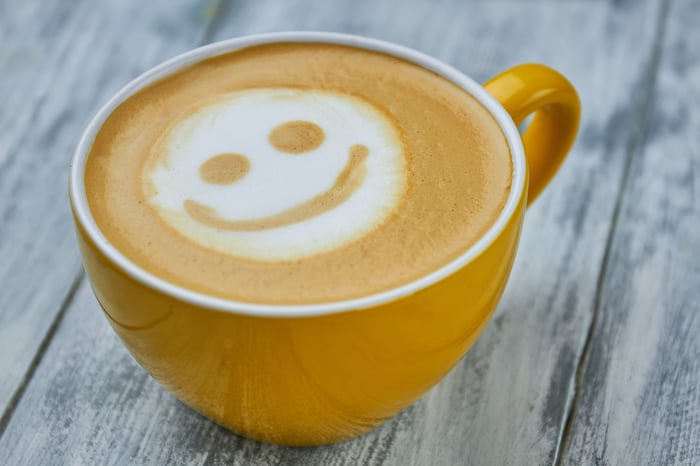 There was everything to like about Starbucks' most recent quarterly earnings report. Comparable store sales were up 5% globally, and growth was steady and consistent in China, Starbucks' key new growth market. Both revenue and store count in China increased by 13% and 16% year over year, respectively, underscoring the strong double-digit growth in the world's most populous nation.

Not only did revenue continue to trend up, but operating margin improvement was also broad-based, improving from 21% to 21.9% in the Americas segment and from 15.3% to 17.6% in the international segment. Reasons included increased operating leverage (due to scale effects), efficiencies in supply chains lowering overall costs, and the conversion of retail businesses to fully licensed operations (i.e. going asset-light).

As a result, operating income jumped 20% year over year while net earnings improved by 16.4% year over year. Starbucks has continued its multi-year revenue growth track record, and FY 2020 looks poised to be another year of top-line growth.

In terms of food trends, one that has taken the world by storm in the last couple of years has been the shift toward plant-based diets. As more and more people grow conscious of their health and are aware of the benefits of eating more fruits and vegetables, many café and restaurant chains have also embraced plant-based alternatives. Fast-food chains such as Burger King have begun to introduce a non-meat version of their signature burgers. Starbucks CEO Kevin Johnson wrote an open letter to shareholders last month committing to expanding the company's plant-based options in order to migrate toward a more environmentally friendly menu.

I see this shift as a way to better engage customers who are thinking of adopting healthier lifestyles, and it also gels with the general trend of shifting away from meat-based diets. Management is recognizing that this is the way forward for Starbucks to remain relevant and, at the same time, be more environmentally friendly so as to build a sustainable, growing business.

January has seen the outbreak of a new disease with flu-like symptoms by a new virus named COVID-19 throughout China and other countries. As a result, China's government has ordered the closures of malls, tourist attractions, and food and beverage outlets in an effort to contain the spread.

Starbucks has shut more than half of its outlets in China as a result of COVID-19, and as the situation is still evolving, the company will only provide updated guidance on FY 2020 once more clarity emerges. The change in guidance will also be impacted by the duration of store closures, but the company is confident in its long-term prospects in China as it has been in the country for around 20 years and the brand is very strong and recognizable there.

With this anticipated temporary hit to Starbucks' revenue, same-store sales growth, and earnings for the second quarter of 2020 (and perhaps spilling over into the third quarter as well), investors who are confident of the long-term prospects of the company will have an opportunity to load up on the shares when analysts downgrade their earnings forecasts due to the ongoing pessimism.

Starbucks' long-term prospects continue to look great, and investors who are looking to own a stake in the company can wait for weaker earnings from the upcoming COVID-19 updated guidance to present them an opportunity to accumulate the stock.

With the company's "growth at scale" initiatives taking root, I foresee continued revenue growth and store expansion for Starbucks as it extends its presence globally.