Please ensure Javascript is enabled for purposes of website accessibility
Log In Help Join The Motley Fool
Free Article Join Over 1 Million Premium Members And Get More In-Depth Stock Guidance and Research
By James Brumley - Feb 16, 2020 at 11:30AM

A couple of major retailers just dropped a hint of where the industry may be going.

Were it just one major retailer presenting the prospect, it could be dismissed as brainstorming. When two different retailers bring up the same idea at the same time in the midst of a "retail apocalypse," though, perhaps there's something to it.

The first of those retailers in question is department store chain Macy's (M -5.25%). Along with a preliminary look at its fourth-quarter numbers last week, the company explained part of its rebuilding plan included closing 125 mall stores within the next three years, yet added it would explore "off-mall formats." Translation: adding strip mall stores. Beauty venue Sephora, owned by LVMH (LVMHF -0.30%) (LVMUY -0.21%) -- better known as LVMH Moet Hennessy Louis Vuitton -- also announced last week it aims to open 100 new stores this year, most of them not in malls.

It's hardly a death blow to the American mall. But it's likely a glimpse of what's to come. As such, retail real estate investors may want to start shifting their focus to real estate investment trusts (REITs) with a little more exposure to neighborhood shopping centers and a little less exposure to traditional malls. In that regard, one stands out above the rest. 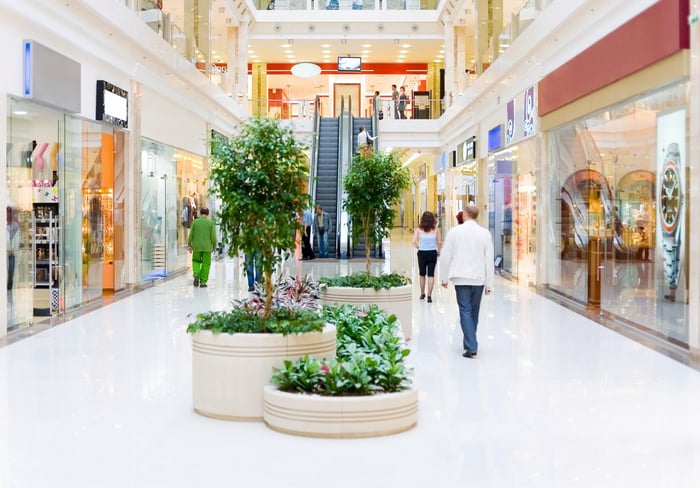 Sephora Senior Vice President of Real Estate and Store Development Jeff Gaul didn't mince words regarding the matter, stating, "We love our stores in malls ... but the focus on this next 100 is more off-mall locations." He went on to explain of the company's typical female customer: "We are getting closer to where she lives and works, where she does most of her errands ... where she can pull right up and grab something." Macy's CEO Jeff Gennette echoed the idea, saying at the company's recent investor day event, "The reality is we have a large number of customers no longer shopping regularly at malls."

And that's malls that are still open. Over 4,000 of these shopping hubs were shuttered last year, says Bank of America, more than doubling 2018's tally of 1,696. Most of those closures are the second- and third-tier malls Macy's intends to abandon anyway. Still, closing stores is anything but a growth strategy. Strip malls are looking like their next best bet.

Very few retail real estate investment trusts are pure plays on conventional malls or strip malls; most are hybrids to some degree. Some REITs are decidedly focused on strip malls, however, and as such represent the ones with an edge should Sephora and Macy's be leading a new trend.

Two names in the space worthy of a closer look are Weingarten Realty Investors (WRI) and Retail Opportunity Investments (ROIC -0.44%).

Retail Opportunity Investments is a relatively small organization, managing 10.1 million square feet of retailing space spread across 88 shopping centers. They're all on the West Coast, which is great as long as the economy remains strong. But it's possible a recession or depression could crimp retailing unevenly across the country, and Retail Opportunity Investments doesn't offer as much geographic diversity as some investors may like. Conversely, Weingarten Realty Investors does offer such diversity, boasting 170 properties spanning 17 different states.

Perhaps the proverbial pick of the litter, however, is Regency Centers (REG -0.60%).

Regency Centers is the biggest of this bunch, with 419 shopping centers under its umbrella, renting 56 million square feet worth of shopping space to its tenants. That size has helped Regency deliver consistent growth -- and consistent payouts to shareholders. 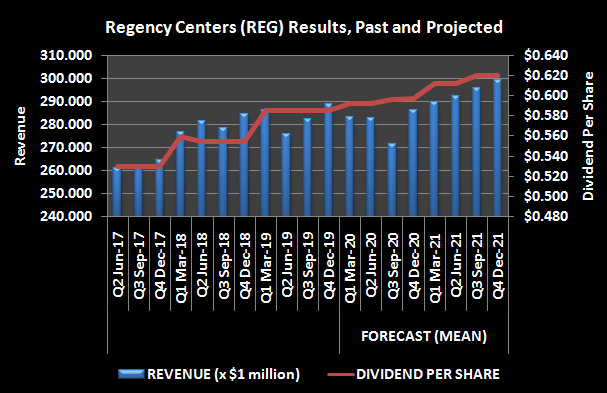 While size helps, it's not necessarily the clincher. Rather, the most convincing argument that favors Regency over its peers is the profile of its average tenant, and of its average customer.

In areas where its strip malls are accessible, the average household income is $122,000, versus $110,000 for other comparable shopping venues. And a careful look at its current tenant mix further reveals that while grocers are its most common tenants, apparel venues like Regency's locations as well. The TJX Companies and Ross Stores are well represented with Regency's network, with 62 and 26 stores, respectively. So is Ulta Beauty, Total Wine & More, Starbucks, and lululemon athletica. Patrons of these stores are the same basic upper-mid-market shoppers that Macy's and Sephora wants, but neither Macy's nor Sephora will have to compete with a direct rival at these locales -- at least not yet.

Step into a slow but unstoppable shift

Sephora's and Macy's interest in strip malls alone won't immediately catapult Regency's bottom line, to be clear. Both retailers will need time to expand (Macy's in particular), and Regency isn't the only expansion choice they'll have.

It's not likely to be just Macy's or Sephora thinking along these lines, though, and of all the off-mall options on the table, Regency Centers appears to be the best-positioned name to bring back former mall shoppers to those retailers who left the malls.