Please ensure Javascript is enabled for purposes of website accessibility
Log In Help Join The Motley Fool
Free Article Join Over 1 Million Premium Members And Get More In-Depth Stock Guidance and Research
By Reuben Gregg Brewer - Feb 17, 2020 at 9:00AM

Two consumer goods giants with storied histories -- is one of them a better investment choice today?

Go into almost any grocery store and you're likely to find products made by Procter & Gamble (PG 0.91%) and Unilever (UL 0.51%). Both companies make things that people use every day in good economic times and bad. The stocks for each company, backed by scale and brand recognition, have long been viewed as safe havens. Is one a better choice than the other right now?

Procter & Gamble boasts a market cap of just about $300 billion. It generates nearly $70 billion in annual sales. The consumer staples giant sells products in over 180 countries around the world and operates in 10 product categories. It is largely focused on personal care products, from diapers to soap to razors. The one thing it doesn't do is make food.

Unilever, at a nearly $160 billion market cap, is smaller than P&G, but still a giant company with a similar global reach. It generates around $50 billion in annual sales. The company, based in Europe, operates in many of the same industry segments and countries as P&G, but it also makes food. That is one of the key differences here.

That said, there's an important difference in the geographic breakdown of each company's sales. P&G generates roughly 45% of revenues from North America versus about 30% at Unilever. That makes sense, given that P&G is based in the United States. In Europe, Unilever's home base, the two generate around the same percentage of sales, hovering in the low 20% space.

The rest of sales at both companies are generated from regions that, broadly speaking, contain more emerging economies -- with P&G generating around 30% of sales from such areas and Unilever about 45%. That's a rough estimate. Unilever goes a step further, pulling out all emerging markets regardless of the broader region in which they operate. By its own measure, the European company says it gets about 60% of sales from these often fast-growing nations. Although it's hard to make an apples-to-apples comparison here, the big picture story is that Unilever has more exposure to markets that are likely to grow more quickly over time.

Looking at each company's balance sheet, neither one comes off as financially weak. That said, P&G does appear to be on a slightly more solid financial footing. For example, the U.S. consumer goods giant's financial debt-to-equity ratio is just a touch under 0.10 times, while Unilever's ratio is a touch over 0.20 times. Both are good numbers, but P&G's is a bit better. That's also true when you look at financial debt to EBITDA, where P&G comes in at 2.5 times versus Unilever's roughly 2.9 times. P&G and Unilever cover their interest expenses by 29 times and 27 times, respectively. 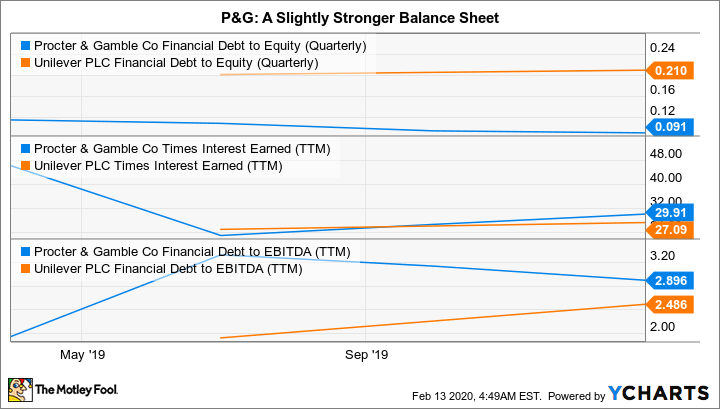 It would be hard to suggest that an investor would be taking on materially more financial risk by investing in Unilever over P&G based on their balance sheets. That said, for truly conservative investors, P&G does look like the stronger company here.

One interesting difference here is that P&G has been doing a pretty good job of late when it comes to growing its business. After resetting its roster of products a few years ago when it sold a large number of lower-margin brands, the company has started to see top-line growth again. The numbers aren't huge, with growth in the low to mid-single digits lately, but management has basically come through on its promise after making a bold change in direction by focusing on a smaller number of more important brands.

That said, both companies are dealing with a difficult and competitive market. Using the internet, new entrants can compete more easily with the industry giants. To that end, Unilever has had mixed results, too. But 2019 was, overall, a decent year with core revenue growth in the mid-single-digit space. So it isn't exactly falling behind.

One notable difference between the two is profitability. P&G's gross margins are up near 50%, while Unilever's are closer to 40%. Neither is bad, but in some ways P&G appears to be doing a better job. P&G's operating margin has historically been better, as well. This makes P&G look like a better-run operation, though it would be difficult to suggest that Unilever is poorly run.

P&G's stock has advanced around 40% over the past three years, with Unilever up roughly 45%. For reference, the S&P 500 Index is also up around 45%. That said, P&G's stock was deeply out of favor when it made the call to sell brands a few years ago, but as results started to prove the move was a good call, the stock recovered. Thus, if you start this comparison from May 2018, when P&G's stock started to turn higher again, the numbers change dramatically. Since that point P&G's stock is up over 70%, handily beating the S&P's 27% gain and Unilever's 10% or so advance. Investors have clearly changed their tune when it comes to P&G. 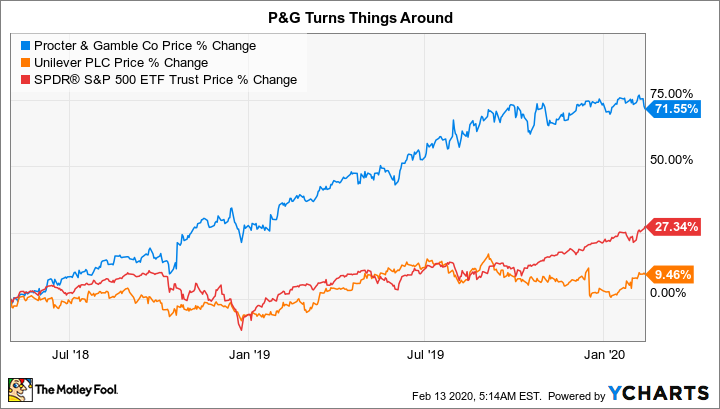 That's important because P&G is trading above its five-year averages on key valuation metrics, including price to sales, price to earnings, price to cash flow, and price to book value. It's also trading above its price to forward earnings, which looks at valuation relative to analyst expectations. P&G looks expensive today. Investors with a value bent probably won't want to buy this stock.

The thing is, Unilever isn't exactly a screaming buy either, though its valuation ratios are more mixed. The European consumer goods giant looks expensive when you examine price to sales, price to earnings, and price to book value versus their longer-term average. However, price to cash flow and price to forward earnings are a bit below their five-year averages. That's hardly a massive endorsement, but Unilever seems more reasonably valued than P&G today.

This trend follows through to the dividend yields each pays, as well. Unilever is offering investors a roughly 3% yield compared to about 2.4% for P&G. (The S&P 500's yield, for reference, is below 2% today.) For dividend investors comparing these two, Unilever would probably look like the better option. But, if you add in valuation, even this picture becomes a bit less compelling.

From a big picture perspective, conservative investors probably wouldn't go wrong with either company. That said, neither P&G nor Unilever really stand out as compelling investments right now. P&G has done a good job of turning its business around after a rough patch, but investors have rewarded it well for that. Unilever has, basically, continued to plod along, which is what you want and expect from consumer goods stocks like these. That said, while it doesn't look quite as expensive as P&G today, it doesn't look cheap, either.

If you had to pick one of these two, Unilever's higher yield and less extreme valuation would probably win the day. But, in the end, most would likely be better off sitting on the sidelines here or continuing to look for other alternatives.